An average Romanian consumer now has to search the country’s shop shelves and markets to find Romanian food products. Peasants stand with their products unsold, while imported goods sell for up to ten or twenty times the price of local equivalents. 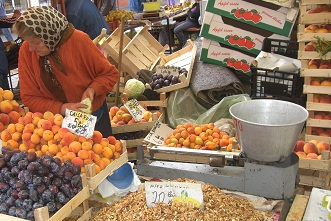 Romanians shopping in large retail shops often don’t realize they are paying 3-4 times more than the import price: grapes are ten times more expensive on the shelves than at the time they enter through the Romanian borders, one kilogram of beans has a 400-500% price addition and a kilogram of apples can be found at the retailers with a 400-700% price addition.

The fruit and vegetable associations are reluctant to speak about this subject, from fear that their products will be excluded from the shelves of large retailers. “I cannot tell you who is guilty for the high prices, compared to the ones at the customs, because I will ruin my relations with the hypermarkets. Importers have their profits, of course, but hypermarkets also raise prices a lot”, declared a head of an association from the vegetable sector. “There is an entire mafia in this sector, and the priority of the Government has to be the elimination of food price speculation. More controls and sanctions are needed.”

Beans come from China, tomatoes, peppers and cucumbers from Turkey and cabbage from Western Europe. All of them stuffed with pesticides, irradiated, injected with heavy metals. The “stiff” competition comes from the Romanian peasant.

According to Eurostat figures, Romanian salaries reach only 20% of the EU average, but the price of a basic food basket reaches a 66% of the average cost in Europe. The most expensive food products are eggs and milk products, which are sold at a price almost as high as the EU average.

Daniel Constantin, the Romanian Minister of Agriculture, declared that all fruit imports from Turkey would undergo detailed controls as a result of recent grapefruit imports that had been found to contain pesticide residues above the legally permitted amount. So far 120 tons of grapefruit have been destroyed. But just how many consumers must pay the price before the authorities realize that healthy and sustainable food is right around the corner, produced by the country’s peasants and gardeners, not thousands of kilometers away, in pesticide-filled greenhouses?

After president Basescu attended the EU Council, he sadly highlighted that “market booths are full with Hungarian potatoes, Italian, French products and Dutch flowers, like we don’t have them in our country”. “We have forgotten to produce vegetables. Romania cannot keep up, Romanian farmers are affected by the subsidy differences. We have to raise the subsidies, to narrow the gap”, he concluded.

In Bulgaria, Romania, Poland and Hungary, people are organising against TTIP, as Derek Freitas of Eco Ruralis explains […]

The Eastern European entrance of Lidl and Kaufland, supermarket retail chains owned by a German corporate group, were financed with loans from public money. According to an investigation by The Guardian, almost 900 million Euro of public funds coming from the World Bank and European Bank for Reconstruction and Development (EBRD) were injected to develop hundreds of supermarkets packed with cheap, imported food. This leaves peasants and other local food producers, largely ignored by these retailers, unable to compete. These public institutions, funded by taxpayers and owned by governments, have explicit mandates to increase local development in the countries where they spend their money. The World Bank also has an additional, specific mandate to reduce global poverty. An International Consortium of Investigative Journalists found that 1,000 World Bank projects approved between 2004 and 2013 forced 3.4 million people from their homes, grabbed their land, or damaged their livelihood. The banks claim that their funding for Lidl and Kaufland would create jobs, opening new markets for local producers and bringing “good quality, affordable food” to poor […]