The director of the British documentary film Pig Business is currently working on country-specific films on the subject of factory farming in Romania, Hungary and Ecuador. The new Romanian film will be shown at The Pelicam festival in Romania in June. 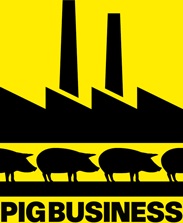 Originally due to premiere on Channel 4 in February 2008, Pig Business – a documentary about intensive pig farming – was cancelled due to fears that it could lead to legal action from Smithfield Foods, the world’s largest producer of pork. Subsequent screenings also ran into difficulties, with a showing at the Barbican in London only going ahead once the director, Tracy Worcester, signed an indemnity taking personal responsibility for its content.

Pig Business contains interviews with academic experts, politicians, industry heads and ordinary people on both sides of the debate. It shows how large corporations such as Smithfield Foods – a corporation that processes 27 million pigs in fifteen countries producing sales of $12 billion every year – now have effective control over the whole market, producing cheap meat to supermarkets, which in turn sends small, independent farms out of business. It also demonstrates the devasting impact of these farms on the environment, and health, particularly for those living dangerously close to the sites.

In July 2003 Robert F. Kennedy, Jr., son of US liberal Bobby Kennedy and Chairman of the Waterkeeper Alliance visited Poland guided by Polish activist – Marek Kryda. Speaking to the Polish Senate, he notes that Smithfield Foods is trying to “get away with something in Poland that people in the United States now recognise is a catastrophe.”

“It’s a battle about who is going to control our resources“, Kennedy, Jr. sums up at the film’s close. “Are our resources going to be controlled by a corporate-feudal system or are they going to be controlled by the people?” A serious problem connected to factory farming is also political corruption: “Smithfield uses its wealth to buy politicians, paralyze regulatory agencies and break health and environmental laws with impunity.”

The role of the EU

Changes to the policies in the EU can put a limit the the expansion of industrial animal husbandry methods.  Mr John Dalli, the Health and Consumer Policy Commissioner for the EU, has promised to pursue more stringent animal welfare labeling for meat products sold in member countries. American producers are by and large unlikely to meet the higher standards, and European consumers are likely to shun products without a cruelty-free label. If such legislation is passed — and Dalli has indicated that he would like this done by 2012 – Americans will either have to adopt the new welfare standards or risk being shut out of the European marketplace. The European Parliament has already passed a law requiring a label on meat that has been slaughtered without stunning, and its passage has only renewed the call for universal animal welfare labeling in Europe.

Many celebrities, including Robert F. Kennedy Jr. and Paul McCartney, have endorsed Pig Business and its message. A screening of the film was held in European Parliament in order to raise awareness among parliamentarians about the destructive impact of agribusiness. In early March 2011 there was also a screening on Capitol Hill in Washington, D.C.

An inspiring ‘development’ were 2500 peasants prevented Europe’s largest gold mine. […]