It is only few days since I returned from my long trip to the North of Greece to attend the International Seeds Exchange Festival of Peliti (see also my previous blog) and I still feel this magic euphoric feeling that was created there. It was the perfect combination of sunshine and refreshing rain drops, under the shade of the unique virgin forest of the mountain Rodopi (a natural border with Bulgaria), pure nature, pure seeds, pure food and pure people! 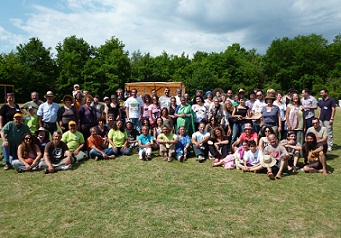 The timing of the festival could not have been better. It is the best response to the attempt of European Commission to dishearten the European movement for the protection of seed biodiversity by proposing a threatening regulation on seeds, just few days before the event.

As Vandana Shiva said at the festival and I paraphrase, the best resistance to the laws that protect the big seed corporations is to continue to exchange seeds and protect the local varieties ourselves.

More than 4000 of people and activists from all over Greece and 15 different countries attended the first day to celebrate biodiversity and exchange local traditional varieties of seeds and plants. More than 20,000 little bags of seeds and 5,000 little plants were distributed. According to a couple of seed savers from Australia travelling and spreading their knowledge (Michel and Jude Fanton), this was the largest seed exchange event that they have attended.

The seed exchange event was followed by two days of in-depth discussions among the representatives of the international seed and environmental movement that led to a common declaration.

It is worth noting that I was amazed by the amazing projects that people were presenting, the openness, the trust and the good intentions to learn from each other and help each other. I could devote many blogs to each one of the people who were attending the discussions as each one of them practice what they preach!

“We declare ourselves determined to keep alive the cultivation and distribution of all surviving agricultural varieties. They are precious natural resource that is a common good, reproduced freely by the farmer, unlike many industrial seeds. […]

[…] We are opposed to imposition of a developmental model for farming that expels traditional varieties from the market. In today’s situation of crisis young men and women who wish to try their luck at farming should have all options available to them when it comes to the type of farming they wish to pursue and the type of seeds they wish to use. It is for this reason that we demand freedom for traditional agricultural seeds and freedom for every farmer to opt for the agricultural model of his preference. Finally we demand that there should be a definitive cessation to the loss of agricultural biodiversity with a radical change in European legislation.

Let us strengthen the social movement for preservation of agricultural biodiversity. Let us learn once more to save seed and become guardians of traditional varieties and breeders of new agricultural varieties with a broad genetic base. When we have the knowledge, the seeds and the right attitude, nobody can force us into dependency on private lobbies and interests.”

An important part of the recent European Rural Sustainability Gathering in Karditsa, Greece, was diverse set of field trips in the agricultural, economic and social spheres. These showcased some of the rural development initiatives in the Karditsa region – and how they are connected via an ecosystem of collaboration. Here we present a snapshot of the day. […]

Oliver Moore attended the 2nd Agroecology Europe Forum in Crete recently. In the first of three reports from the island and event, he tells us here about the one of the field trips. This was a visit to the inspiring Apo Kinou social coop, where production, distribution and consumption are all under collective control. […]