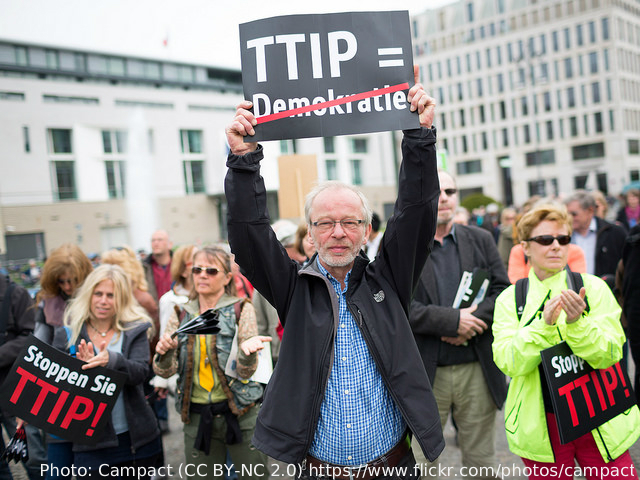 In the ongoing trade talks, the rhetoric around regulation of GM food has often been characterized by European citizens strongly opposing GMOs and stricter regulation in the EU against a “science based“ approach in the U.S. In fact, the U.S. Agriculture Secretary Tom Vilsack, indicated earlier this year on a tour of Europe, “that concerns (…in the EU) about the safety of GMO crops are not scientifically supported, and emphasized that the potential EU-U.S. trade deal would need to be “consistent with sound science.” More simply put, Europeans are against GMOs based unsubstantiated fear, while the US whole-heartedly  supports GM food based on a sound scientific rationale.

This however, is far from the truth. In their letter to the US Trade Representative Michael Froman, the signatories question the goal of harmonizing legislation on GMO food,  “This corporate goal for TAFTA threatens not just the EU’s robust GMO labeling policies, but also those being advanced in the United States.”

Dena Hoff, from the U.S. National Family Farm Coalition said in IATP press release,  “Once again, the USTR is working to give corporations their TAFTA-created ‘rights’ to violate the rights and wishes of people to know what is in their food,” said Dena Hoff, VP of the National Family Farm Coalition. “GMO labeling is desired by at least three of every four consumers; it is time for the USTR to respect the sovereignty of nations and the desires of the people who live in them instead of telling consumers to ‘eat and shut up, or else.’”

The US groups have expressed concerns that the chapter on “technical barriers to trade” would limit governments’ ability to maintain or establish product labels that inform consumers that the product contains GM ingredients. Vermont was the first US state to pass legislation requiring GMO labeling without any restrictions. More than 20 states in the US are considering laws on GMO labeling.

It’s not just civil society organisations that are concerned about the impact of TTIP. One of the signatories the American Sustainable Business Council’s, Richard Eidlin, said “By requiring labeling the food industry will become more transparent, which leads to greater accountability to a wide range of stakeholders,” said Richard Eidlin, at the American Sustainable Business Council. “Labeling, as we have seen from cigarettes, alcohol and many other consumer products, helps to protect the public as well as foster greater business competition and innovation.”

US negotiators have been clear that one of their main aims in TTIP is to increase market access for US agri-business and that EU GM labeling requirements are a trade barrier. The US negotiators argue that European regulations should take a similar approach to US regulations and be based purely on scientific assessments, instead of the current EU approach that based on scientific assessment and political approval by the European Council, Commission and Parliament. This approach allows wider impacts such as ethics and the impacts on the environment and on society to be taken into account[1].

TTIP seeks to harmonize standards in a number of areas such as food safety and labeling. IATPs Karen Hansen-Kuhn explained “The push to ‘harmonize’ standards in TAFTA could undermine many important efforts by US states to raise the bar on food safety, labeling or other efforts to rebuild our food system so it works for farmers and consumers,” said the Institute for Agriculture and Trade Policy’s Karen Hansen-Kuhn.  “We need to encourage those innovative, citizen-led approaches, not limit them to what trade bureaucrats deem is acceptable.”

More news on TTIP from Arc2020

TTIP in disarray as US Senate rejects fast track

TPP has been dealt a hammer blow by Democrats in the US Senate. TTIP has been impacted too, as we reveal…. […]