The detail and some aspects of the CAP will depend on a successful outcome for the Multiannual Financial Framework. While DEFRA is careful to leave the minister a free hand in policy decisions, it is already clear that regardless of Single Payment Scheme (SPS) entitlements for previous Pillar I direct payments, the UK is committed to applying an “active farmer” test to ensure SPS payments in future.

The government is committed to simplifying the administration of an anticipated GBP 17.8 billion over the 2014-2020 budgeting period at all costs. The primary simplification is likely to be paying fewer farmers. DEFRA has already suggested that small farmers would be excluded from some schemes on the grounds that there would be “…few benefits…” and that administrating these claims “…would add to cost and complexity.”

At present, the minimum farmed area for an SPS claim is one hectare but the minister is minded to raise it to five hectares. DEFRA estimates that this would take SPS away from 16,000 farmers, roughly 15% of those currently eligible. The ministry justifies this on the grounds that it will save the Rural Payments Agency administrative costs, claiming that 60% of holdings under five hectares are not being farmed primarily for “business purposes.”

There is the questionable suggestion that since such holdings would not be required to observe greening measures and cross-compliance, they are somehow not green. This is playing with numbers, too, since the impact of small holding sizes is easier to play down.

DEFRA is keeping open the minister’s option to revise SPS entitlements. The ministry also has the option to grant entitlements to farmers who did not previously qualify for SPS but as of May 2013 were: “…growing fruits, vegetables, ware potatoes, seed potatoes, ornamental plants or vines.”  This is of limited use, however, since about half of the UK’s horticulturists farm fewer than 5 hectares, anyway

Regardless of whether a holding qualifies for future SPS entitlements, claimants will have to prove that they are active farmers. This is likely to be a two-part requirement that potentially exclude those operating “…permanent sporting and recreational facilities…” or a number of other activities. Those who keep most of their land for grazing or cultivation but do not carry out “…a minimum level of activity,” would also be excluded from active farmer status. There is no guidance as to whether habitat conservation counts as “activity.”

The rural development document outlines the four main themes that it is seeking to develop in a programme that: “…enhances competitiveness and productivity, the rural economy and the environment, promoting jobs and growth; delivers against a broad range of activities, where it will provide the best outcomes and value for money, for taxpayers and consumers; is implemented in ways that are as simple, effective and affordable as possible; and keeps the bureaucratic burden on farmers and small businesses to a minimum and reduces implementation costs.”

The current Pillar II programme, worth GBP 3.7 billion over seven years is being spent on “environmental land management (83%); farming and forestry competitiveness, productivity and skills (5%); wider rural growth (8%); and Leader (4%).” 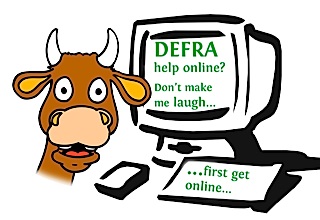 The UK government has been actively preparing to deliver the next round of CAP funding, Pillar I and Pillar II alike, online. Online administration will be a sore point, since broadband internet access has a very limited reach over existing telephone lines. Building up high speed networks has been a lucrative business in urban areas, but is both technically challenging and more expensive once subscribers are sparsely distributed.

For DEFRA to say: “…it will make it easier for people to do business with us.”  is at best disingenuous. There is not a lot of flexibility in this policy, either. While setting the online agenda as a requirement rather than an option, there is passing recognition that “…customers may be unable to use an online system for all or part of their needs.”

The offline alternative goes by the name of “assisted digital support.” What form this might take is anyone’s guess. Even DEFRA is not sure yet, adding: “We are currently working on the scope and range of the assisted digital programme.”

What is the latest on the ‘revolutionary’ new farm schemes in the UK nations and how are farmers and other stakeholders reacting? James Woodward and Vicki Hird of Sustain take a look. […]

Here we round up some recent perspectives on the Commission’s CAP proposal. This includes a summary of the 18 months of work that went into the document(s), concern over capping backsliding, a briefing on conditionality, which member states want to keep the cash as it was, and an Urgenci (CSA) and Birdlife perspective. […]