It looks like a retro computer game, but sign up for this game and add your voice to a protest against food speculation planned for Brussels on September 4. “It doesn’t matter if you are no good at the game, just add your name to the list and we’ll add another 10 centimetres of barrier tape to the tape that we will use to stop bankers betting on food prices,” WDM campaigner Christine Haigh told ARC2020. 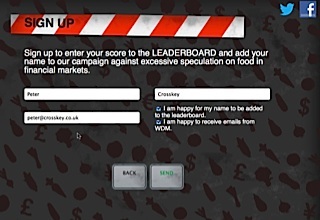 The occasion is a trilogue discussion in the European Parliament of regulations to stop financial marketeers using food like gambling chips in their money-go-round markets. World Development Movement (WDM) is joining forces with other organisations across Europe to remind the policymakers that food exists to sustain life, not profiteering. Should you spot a resemblance between the red and white snake and barrier tape, it’s all part of the game.

What role does – or can – farming and food play in mitigating climate change? Retaining and storing carbon in the soils should be an obvious climate-change mitigation, improving soil fertility through the natural processes of grazing, returning animal manures, and using legumes to fix atmospheric nitrogen has the indirect benefit of reducing the farmer’s reliance on artificial nitrogen fertilisers manufactured using fossil fuels. […]

GM Freeze speaks out against hi-tech approaches to future farming […]

In our new series, Dr. Andrea Beste explores the similarities, differences and synergies between the organic, agroecological and regenerative farming movements.