Land grabbing in Romania is reaching a blatant level but mobilisation against it is scaling up too. On the 26-27th of September, 2015, Eco Ruralis hosted in Cluj Napoca the first meeting of a newly established Working Group on the Right to Land.

During the gathering, Eco Ruralis members and supporters debated important land related problems faced by peasants and agroecological food producers: lack of transparency behind large land acquisitions, equitable access to land for young and future farmers and land policies oriented towards land concentration. The meeting specified future collaboration by the group in order to intervene on the issue of land grabbing and fair access to land in Romania. 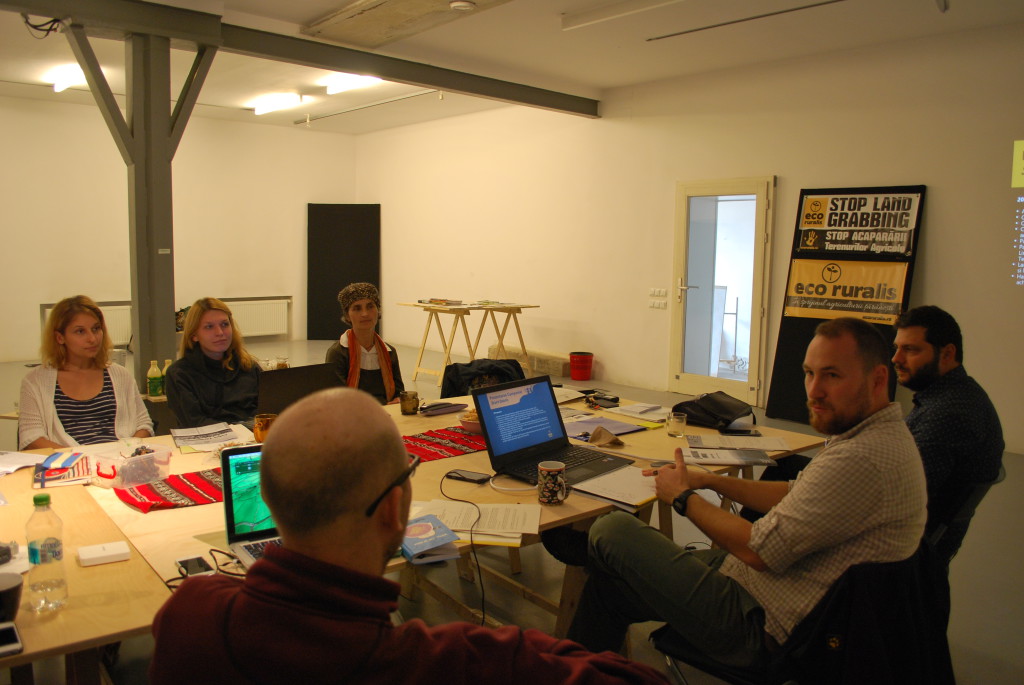 Defining land grabbing generated an interesting debate inside the group. Several criteria were raised, taking into consideration quantitative and qualitative indicators of what is a land grab. First of all, we noted the duality of the Romanian countryside, where more than half of the available lands are cultivated by small farmers, while the other part is controlled by companies and other actors. This obviously opens up the dimension issue. At what size is a holding too big? Several other indicators were linked to this, like: ownership vs. lease, extent of control over decisions regarding the use of land and natural resources, speculation on land prices and access to information and capital.

Another interesting point was legal vs. legitimate. While the acquisition of large tracts of land is legal in Romania according to its market based regulations, how fundamentally just are they? Several Eco Ruralis members pointed out that even if large acquisitions of lands by companies and investment funds in the South of Romania have a final legality (contract), the process is very vulnerable and generates local corruption, which itself leads to abuse.

Also, land grabs were defined as having an irreversible impact on local peasant communities. But these effects take years to measure after the investment has happened and exploitation started. Meanwhile, locking the land either by monocultures or simply by speculating on their price strangles sustainable rural development. While subsistence drops, unemployment becomes higher, generating an exodus of the young and minimal wage labor (or no labor) for the ones that stay.

This scenario was already highlighted in numerous case studies, done by Eco Ruralis or investigative journalists. How can we accept large land investments when their impact seems to follow the same pattern over and over again? And the process is still sustained by EU and Governmental support.

But the group also brought forward solutions. First of all, more transparency is needed in the process of large land acquisitions. The group took responsibility to investigate and expose more deals, generate more case studies, reports and push decision makers to insure the availability of information regarding land deals and policy making.

Peasant cooperation on a local level must intensify. A united peasant community is stronger in front of multinational pressures coming from companies or free-trade agreements. Some working group members pledged to advocate on a local level for the creation of local cooperatives and to educate community members about the importance of agroecology rather than agroindustry.

Community land banks were also highlighted as a solution, especially in highly speculated areas in the south-east of Romania. Being part of a recently established network called Access to Land, Eco Ruralis will better explore models like the French Terre de Liens or German Regionalwert AG. These models will be further debated in the working group to adapt them to the specific Romanian context.

As a positive approach, the facilitation of volunteering on agroecological farms was also highlighted. In lack of more established networks of starter or test farms in the country, WWOOF Romania (a program of Eco Ruralis) offers the chance to volunteers, future agroecological farmers, to get connected with the land, try out and refine organic farming skills and get motivated in accessing land for food production. Several group members are also WWOOF Romania Host farms.

Why the need for such mobilisation, one may ask? Well, unfortunately Romania is one of the most land grabbed country of the EU. Estimates show that, already 1 to 4 million hectares of farmland is controlled by multinational companies or speculative investment funds. But Romania is also a country of millions of peasants. And this is the foundation on which Romanian food sovereignty can be built.

With Covid19, aka the coronavirus, come restrictions on people’s outdoor movements and gathering. This means that, while supermarkets are considered essential, it seems to be case by case for other food markets: instantly,  farmers markets are shutting all over Europe with serious consequences for small producers. Digital food platforms have never been more urgent. Open Food Network is perhaps the best example of a good food network that’s digitised, cooperative, open source, not for profit and ready for your community.  […]

Isabella Lang has been working on her friends’ farm in the Austrian Alps since the spring. After four years in the Brussels bubble, she was keen to get her hands back in the soil. It’s been several months of hard work, long days, amazing food, and a healthy pace of life. In this first letter Isabella introduces us to the farm. Meet the new peasants. […]