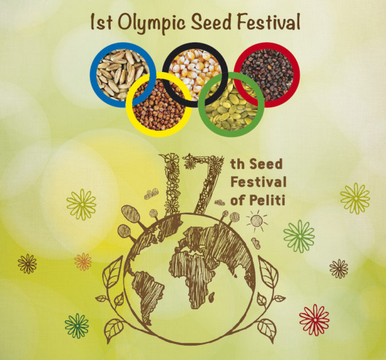 In the build up to the Forum Synergies European Rural Sustainability Gathering 17-20th May, we continue our focus on grassroots initiatives in Greece. Here, ARC2020 President Hannes Lorenzen interviews Panagiotis Sainatoudis and Vasso Kanellopoulou. The interview took place at the  17th seed festival of Peliti and the first international Olympic Seed  festival in Peliti, Drama, Greece 20-22 April 2017.

Peliti is a voluntary, non-profit organization and movement based near  Drama in Greece, working for the preservation of agricultural  biodiversity through collection and exchange of traditional seeds.

The  movement was launched by Panagiotis Sainatoudis in the year 1995  and  since 2000 Peliti organizes yearly gatherings of seed savers on the national level. In addition Peliti has 18 local groups all around the country that continuously work with schools and local communities for the promotion of agro-biodiversity. Vasso Kanellopoulou is a volunteer for Peliti for the last 10 years working on raising awareness through public speeches, on international cooperation and on legal issues.
Find out more about the European Rural Sustainability Gathering in Greece 2017 (Free)
Hannes Lorenzen You have invited the seed savers of the world to meet in Drama for  the first Olympic seed festival. What is the new Olympic dimension of  Peliti’s engagement in seed saving?
Panagiotis Sainatoudis You may remember that in war periods during  ancient times, Olympic  games were connected with a truce between the fighting parties –  so with the Olympic Seed Festival we are trying to do the same. We want to stop war with nature. We want to give seeds –  the beginning of life –  a new  peaceful role. Seeds should become the tool and the symbol for  making farming more sustainable. If more people take better care of  their seeds and understand how much of their lives and future depends on them, we will be able to create a more reliable food system.

Read and watch: Declaration of the first Olympic Seed Festival

Hannes Lorenzen Your seed movement is based entirely on voluntary work of seed  savers and distributors. Is that strong enough to face the growing  concentration of power of a handful of seed companies?
Panagiotis Sainatoudis I believe our strength lies in our ambition to build upon our  cultural heritage and the principle of commons. We share our seeds free of charge because they belong to all of us. But if you receive seeds for free you also share responsibility of reproducing them and sharing them  again. This creates strong links between us, much more than money does.  We must first change ourselves before we can change the world around us. We can no longer delegate responsibility to politicians. We must take responsibility for our common future. In the past we have invested much energy in fighting what is going wrong with farming and food. Now we check our possibilities to make a difference. It does not help to complain that poverty is growing in our country. We want to offer  practical solutions. If you have no job and nothing to eat seeds are a solution to grow and have food. Once this simple truth is understood much can change.
Hannes Lorenzen What can Peliti and its seeds contribute to overcome the ongoing crisis in Greece?
Vasso Kanellopoulou The recent economical crisis is just a reflection of the general  crisis we are in for a long time. Our politicians seem to have lost track of what is happening. They do not rule any more. They have given up on the rules international companies impose on us. We are not against  global cooperation. We are against global corporations ruling us.  Working with seed movements around the world we create and protect  diversity from our own cultural roots and understanding. We are easily crossing borders. We work with initiatives in Turkey, Bulgaria, Cyprus,  the Western Balkans and Syria. But we know our strength lies in our own country Greece.
Hannes Lorenzen From a legal point of view you are working on difficult territory. European and national legislation on seeds is not very favorable for  agro-biodiversity.

Vasso Kanellopoulou You are right  seed legislation is bad and it should change, but  it is not the biggest problem. I am also worried about the state of mind  of agronomists, researchers and breeders. Quite a few of them seem to believe that the seed laws we are opposing are good. They believe exclusively in the purity of varieties which is of course important but evolution and adaptation are also very important and should not be neglected. They  neglect evolution by agreeing to limit traditional seeds to their place of “origin”  – actually place of adaptation –  and they seem not to want farmers and seed savers to develop and spread genetic diversity. But if we want to be prepared for climate change and unforeseen diseases we must create a broader gene pool, more possibilities to cope with the coming challenges. If even a number of agronomists do not share that view, I am really worried were we go.

Hannes Lorenzen It seems that in the US there is space in spreading traditional  varieties more freely. There are more than 200 catalogues of traditional varieties without breeders rights offering diversity for farmers and gardeners. Should Europe follow that path?

Vasso Kanellopoulou I found the presentation of Shannon McCabe very interesting. The catalogue of her company is freely offering a lot of traditional seeds, a  part of that collected in Europe and reproduced in the US. Why is that not possible here? Take the example of our traditional Greek salad: Tomatoes, feta cheese, cucumber, onions. The tomatoes were introduced 200 years ago by a French monk. We have developed a wide range of “local varieties” from that over time with very rich taste and colours. The variety is there because the  seeds have been able to travel and adapt to the different local soils and micro-climates. So let the seeds travel and find out what is best.

Our approach of voluntary work is powerful as it raises awareness and strengthens the social movement, but  the American business approach  exclusively for traditional seeds  – and of course not for GMOs –   is also very interesting. In any case, seeds must get out of control of the corporations and into hands of as many farmers and gardeners as possible  so that diversity can grow again.

How can President Sarkozy change the agricultural model without reforming the CAP!?

Securing land for agroecology gets a helping hand with the launch of a new website. Eco Ruralis report. […]