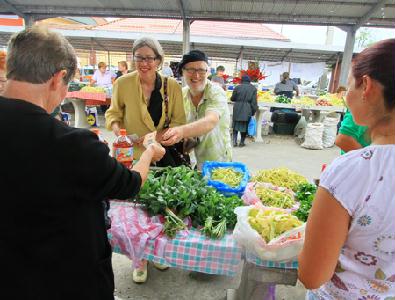 “Gustare de la Kalotaszeg” (A Taste of Kalotaszeg) is an alternative food network (AFN) located in the Transylvania region of Romania that offers more flexibility to urban consumers than other box schemes. If you don’t like buying the same amount and similar types of food products every week from only one seller, which is common with other Community Supported Agriculture (CSA) initiatives, this type of network may be for you.  Derek Freitas, Food Sovereignty Campaign Coordinator for Eco Ruralis, reports.

Gustare de la Kalotaszeg (TKD Box) is one of several projects coordinated by a local NGO, Tarnat Kalotaszeg Durabil. Two people, Sarah Bleaker and Douglas McFarlane, coordinate these projects near a town called Huedin. TKD Box was established in 2012 due to access to market issues that started occurring a few years ago at the Huedin Market. Peasants were unfairly kicked out of the old market and could not find space or pay the new higher fees for producers in the new market which were demanded by the local government.

Sarah and Douglas realized that something had to be done to help peasants, many of them old, to sell more of their food in order to pay for basic necessities. They considered and tried out several ideas including growing their own food and selling it to consumers and then providing peasants with the profits. Finally, they decided that the best way to help them was to expand their customer base. They stopped selling their own food and spent more time finding urban customers of peasant products, coordinating transport, creating a customer pickup point and establishing a system of communication.

Every Tuesday morning, the TKD Box coordinators go to the Huedin Market for the big market day. First, they visit each seller to see what food they have available, the prices and quantities. Then, they decide which products to buy from which sellers based on the orders they receive from customers in the nearest city, Cluj-Napoca. Altogether, they work with around 15 local sellers and try to diversify their purchases so that each seller gains a bit more profit than they would have that day.

After buying all the products, they arrange a box of food for people that order a normal weekly amount of vegetables, herbs and fruits that is designed to feed two people. In addition, depending on availability and customer desires, they buy single products like honey, eggs, milk, bread, oils, flour, cheese and other specialty food items like jam. 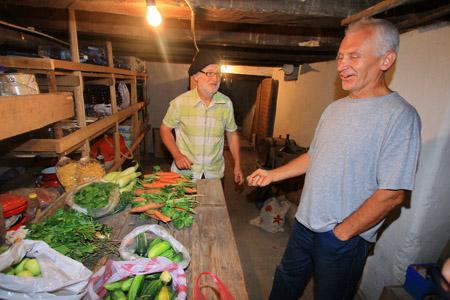 After organizing the orders, they pack up the products and deliver them to Cluj-Napoca. Eco Ruralis’ office is the customer pickup location of the products. TKD Box coordinators email Eco Ruralis staff a list of who ordered what and what each person needs to pay. Customers communicate through phone, facebook and email about their orders. Also, customers receive a “box note” that includes a story about where their food came from and /or how it was produced, updates about the availability of certain products and addresses changes to the program. Eco Ruralis interacts with the customers and gives the money received to the TKD Box coordinators the following week. There is absolutely no profit extracted by Eco Ruralis through this program.

Eco Ruralis staff visited the Huedin Market in August to do its first market study. A part of this work included researching how producers and consumers feel about the program. Overall, we conducted interviews with over 30 people for this study including the market manager. A part of that includes our discussions with 8 TKD Box producers, 8 of its consumers and both the coordinators.

How producers feel about TKD Box

Most of the TKD Box producers said that they appreciate the work that Sarah and Douglas do but admit that they make only very small profits from the products sold through the program.

One married couple in the new indoor portion of the market mentioned, “we’ve cooperated with TKD since the beginning of the program but it doesn’t matter that much in regards to profitability.”

Yet another middle-aged woman who owns a garden in Huedin said, “it really does help sell some of my products but I am still not making that much money, just enough to make it to the next week.”

And an old Hungarian peasant woman living nearby added, “I was one of the first people to get involved and it gives extra economic support to older people.” 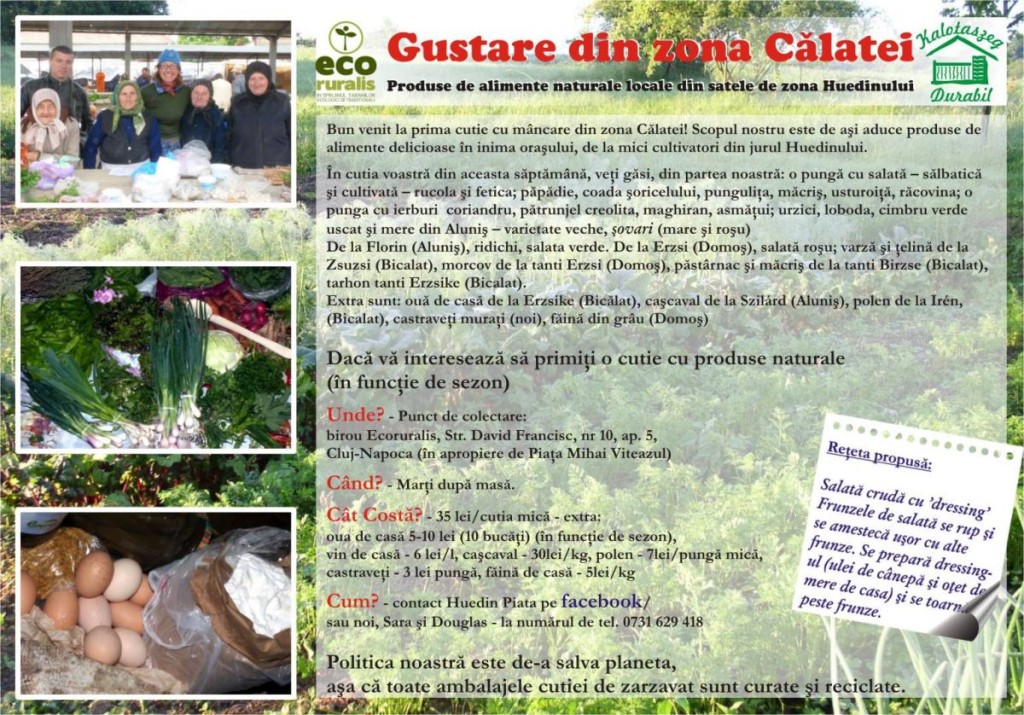 How consumers feel about TKD Box
All of the consumers we interviewed said that overall they are satisfied with this alternative food network. Everyone likes the “box note” because they like to know how their food is produced. The social aspect of helping peasants sell the food that they work so hard to produce matters to them. They participate mostly because they are unsure if the people selling in city markets are actual producers. They want food that tastes good, is healthy for them and isn’t grown in an environmentally harmful way.

One person commented, “I’m vegetarian and I buy the box to have organic food and support local agriculture. I’ve been a customer since May, 2013. I also buy bread and honey. I always read the box note and I’ve met the bread baker and other producers of my food through this program. The box price is a fair amount though not the cheapest. The box feeds 2 to 3 people and we eat all of it.”

A local small business owner said, “I used to buy the box but it is too much for me. I can’t eat all of it. Now, I just buy cheese, eggs and bread. I buy the cheese because I couldn’t find better cheese elsewhere. I actually helped make the flier for the cheese maker to help him sell more products. I’m satisfied by the quality of the products and think that the prices are good considering the quality.”

She also provided some constructive criticism of the box, “I didn’t need so many herbs in the box. More beans, carrots and other vegetables would be better. Before buying from TKD, I received a box every week from Cutia Taranului {another alternative food network}. They have better balance for boxed products.”

Another person said, “The price of products is always fair. I thinks the single products not sold in the box are very high quality. A bit of the food from the box goes to waste. I try to give away some of the food I don’t want to others.” She provides some ideas for how to make the program a bit better, “At times, I think there is a lack of communication. It may be better to offer 2 box options: 1 half box (half the current size and half the price), 1 full box (the current size and current price). And when the food supply is not so diverse like in the summer, there should be less food put into the box.” Two other people agreed about having two box options too.

How the coordinators feel about TKD Box

“We started this program to raise consciousness about the value of locally-grown food.”

“We think that consumers participate due to shared values – local food with little or no spray that is grown with manure where possible, includes no middle man and to learn about a market which you can’t get to yourself.”

Sarah and Douglas said that they know that they are not giving a huge economic boost to all the producers they work with but try to “shop for TKD Box as we shop for ourselves – no difference. We try to spread the money around. So after buying from two or three of our consistent producers, we buy from as many locals as possible. I guess when I go around the market, I look for old faces – we normally chat and I see what they have – sometimes I say I will browse and come back – to see if someone has something which I consider to be better
quality etc.”

It is true that some of their sellers may be gaining more profits than others because they may have few products and sometimes half of their quantity is sold through TKD Box. This program can help them quite a bit.

Both coordinators acknowledge that the transport, time and communication could be handled in a more effective way in the future. They were happy to take a second and reflect on their experiences so far. They think that this evaluation will definitely help the program. Their facilitation between producers, consumers and Eco Ruralis is a creative way of connecting people to healthy, local food in an economic, environmental and social sense. If producers are not going to benefit from CAP measures very much, then they need to get more involved with initiatives like this. There are so many creative and commendable models of alternative food networks out there and this is just one of many that can and does help people rely on themselves, not corporations or governments. Let’s hope for more to pop up!

A workshop aiming to focus on learning from a new wave of food initiatives which are contributing to strong and lasting urban-rural links and are creating the foundations for a new generation of local development strategies. […]