There are a number of policy imperatives coming together, all of which related in some way to farming, food and rural Europe. While CAP clanks on, the EU Green Deal and its Farm2Fork component have more ambition and perhaps momentum. But how will these policy proposals work out their differences, with pressure from some many angles bearing down on them? Oliver Moore sketches out the terrain.

The Parliament, Commission and Council all share co-legislative roles in Europe. In the Parliament, traditionally the Centre groups have maintained a grand coalition of sorts, with centre right (EPP) centre left (S&D) and centre-liberal (formerly ALDE, now called Renew Europe) maintaining a CAP that supports the largest, most industralised producers and systems, with little space for agroecological approaches.

Green (Greens EFA) and left (GUE) groups often complain about weak environmental rules or about the poor treatment of small farmers or the most recently joined member states. In the latter, they are often joined by a wider spectrum, especially from said member states in eastern and central Europe. However as they don’t have a majority, business-as-usual tends to carry on.

MEPs from the centre left (Socialists and Democrats) and liberal group (now called Renew Europe) occasionally work with these green and left groups to make progress in some areas. So coalition-building on set issues is important.

Sometimes the MEPs that sit on the AGRI Committee in the Parliament – the ones with more decision-making power over CAP – do something slightly unexpected, like the 22-20 vote for full convergence in the previous sitting of the Parliament. But, by and large, AGRI MEPs do the bidding of the mainstream ag lobby.

The Council of Ministers for the most part defend national economic interests, which tends to be more about supporting agri-industry than the environment. As we outlined in detail on Friday, some countries want to spend less on CAP – mostly wealthier western EU member states; moreover there is much variance on  Pillar 1 and Pillar 2 spending and transfers. When crunch-time coems it tends to be national ministers or heads of state who have the real power, so this is probably the dominant of the three institutions, when it comes to CAP.

Finally the Agriculture and Rural Development Commission comes up with the CAP reform plans. Sometimes it proposes interesting elements or even, in the case of Ciolos (Commissioner from 2009-2014) whole new and quite radical approaches to CAP. However these more radical elements have in practice found it hard to get through the co-legislating process, where national ministers and Ag lobby supporting MEPs flex their muscles and a CAP that’s mostly about income support carries on.

The Green Deal vs the CAP process

When it comes to the big policy decisions in Europe, the tectonic plates seem to be shifting somewhat. With both climate and farming activists on the streets, the new EU Green Deal has come to the fore as a flagship approach for the new Commission. To an extent, the Commission and some MEPs are grasping the nettle on big changes that need to be done, but are at the same time under enormous pressure to not rock the boat.

There are some specifics to the EU Green Deal that are worth mentioning. For one thing, its new: the CAP process is running for some years and the new Ag Commissioner  Wojciechowski decided to pick up the files as the were, rather than start again from scratch with a new CAP proposal. This means there is less environmental ambition in CAP than in the Green Deal.

At the link below we have listed the farming and food reverences of the EU Green Deal approach. Note in particular its focus on reduced use of fertilizers, pesticides, antibiotics and increased climate ambition. Add to this a just transition fund  – for which some of the funds will have to be found – and we can see that there is the potential for something new to be done with how farming and food are supported.

The Green Deal’s Farm 2 Fork strategy involves a number of Directorate Generals (DGs): Health, Trade, Environment and Climate Action  all share a role with Agriculture, while it comes under the “Executive  Vice-Presidency of the EU Green Deal under Timmernmans”. Importantly, its progress is led by DG Sante – not DG AGRI.

This diagram by Alan Matthews, taken from an excellent explanatory article on his blog, illustrates the connections. 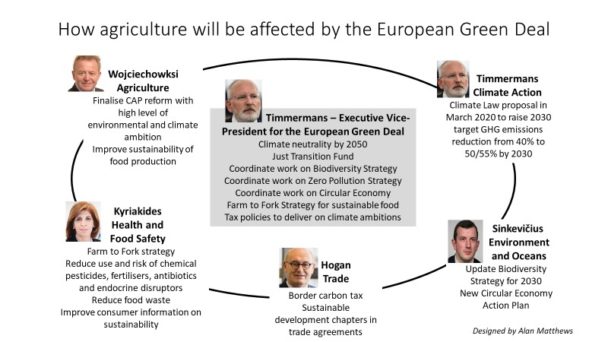 With some many DGs involved in the EU Green Deal and its Farm 2 Fork strategy, there seems to be some potential for a wider range of interests to be represented. Our leaked version of the Farm 2 Fork, and accompanying commentary, sketches some of this out.

And yet, the CAP process drives on ahead, trying its hardest to keep established stakeholders happy. The January Council of Agricultural Ministers meeting saw them, once again, try to reduce the strength of the minimal requirements attached to CAP payments. In a move wearily familiar to people who have followed the process over the years, once again these ministers have tried to get rid of the requirement in conditionality for crop rotations. Despite the fact that “crop rotation is a critical and effective farming technique that reduces the use of pesticides and maintains healthy soils” once again national ministers oppose the Commission’s attempts to include these sorts of basic provisions. (See this  WWF post  for more).

WWF added some positive notes: “some countries did call for more ambitious goals for European farming. France were disappointed that there were no quantitative targets for pesticides reduction in the European Green Deal, while Spain underlined their commitment to achieving an agriculture with net zero GHG emissions before 2050. Nevertheless, these statements do not reflect the content of the latest drafting suggestions prepared by the Council, which contain no amendments to increase the environmental ambition of the CAP regulations proposed by the European Commission and instead water them down.”

And as we reported on Friday, taking money from Pillar 2 of CAP and moving it into the Just Transition Fund seemed president of the European Council Charles Michel’s big trick to make the books balance ahead of the leaders summit on 20th.  That Pillar 2 of the CAP is the more on target and environmentally-orientated part of the CAP seems lost on Michel. Or, more precisely, an inconvenient and disposable truth.

Much pressure is being applied on the environmental specifics of Farm 2 Fork. Euractiv reported recently on the French right wing MEP Anne Sander arguing for the retention of pesticides (and at variance with even the French position at the January ministerial meeting). And yet, draft copies of the EU Biodiversity Strategy state that pesticides and fertilizers should be cut by at lest 30%, Politico reported on 3rd February (paywall).

Meanwhile, there is so much we don’t know about pesticide use in the EU, according to the European Count of Auditors’ latest in a long line of critiques of CAP.

ARC has also uncovered a GRI document (dated 24th January) led by the AGRI Parliamentary Committee, which sheds more light on the matter. It responded to the call by the newly elected Parliament for greater study of the interactions between the CAP process and the Green Deal.  (The GRI is the inter-institutional relations group – essentially a group that tries to forge coherence between the three institutions –  Council, Parliament and Commission.)

It is noteworthy that even this document, called a Fiche, led as it was by AGRI,  acknowledges that “the CAP proposal preceded the Green Deal and its new level of ambition” while, strikingly,  states that there has been a “clear attempt by colegislators to reduce the ambition of the CAP proposal”.

This Fiche describes an AGRI led process to inform the institutions of the outcome of its analysis into the Green Deal and CAP relationship. What’s even more interesting is that informed sources tell us that AGRI has since then lost control of this Fiche, which is now in the hands of the vice-Presidency with Timmermans.

Clearly then, there is a battle being fought on a number of fronts, including within the institutions themselves, for how farming and food will feed into these disparate policy positions. As ever the forces to prevent significant change are great, and are working on all institutional levels to impede deep change. But the structures are a little different now, with responsibility shifting around at DG level in particular. It is all still to play for.

Since the release of the Farm to Fork strategy, the Commission has faced a considerable amount of criticism, which generally cites the potential economic and food security impacts of F2F. Here IDDRI experts analyse the methodological limitations underlying this criticism and shows that a more systemic approach instead reinforce the relevance, coherence and realism of the Commission’s strategy. […]

The EIP – European Innovation Programme – offers significant potential for citizens and agri-environment. What’s in it? […]

After months of delays, the European Commission has adopted the Regulation on the Sustainable Use of Plant Protection Products. The regulation proposes legally binding targets and annual reporting by Member States to reach a 50% reduction in pesticide use by 2030. There are however, some serious issues yet to be resolved. Unpacked by Ashley Parsons. […]