During the 10 day ARC2020 Speakers Tour on Landgrabbing, taking place from 21 – 30 April, two experts on the topic from Romania will visit cities around Europe to raise awareness of the social and environmental impact that large scale land aquisitions is having in their country. On 24 April they were in Vienna, where they were able to highlight a specific case of an Austrian landgrabbers: Bardeau Holding.

Bardeau Holding is a group of companies owned by the 56 year old Austrian count – Andreas von Bardeau. The company operates in the western regions of Romania, focusing on crops as well as livestock. According to the group’s website, Bardeau holds 21,000 ha of arable land in Romania: owning 12,000 ha, and leasing 5,800 ha to the Romanian Agency of State Domains and another 3,000 ha to private smallholders. Bardeau also owns the oldest rice farm in Romania and is very involved in the lumber business, owning thousands of hectares of forests in Romania. In 2012, Bardeau Holding Romania had over 500 court cases open.

The profile of an Austrian landgrabber

Count Bardeau’s interest in Romanian farmland grew after a German forum in Timisoara in 1999, which included a visit to the rural landscape of the Banat region. He quickly realized that Romania has a lot to offer in terms of agriculture, and decided to invest – often with the help of the Austrian ambassador in Romania, an old family friend.

Keeping his eye on the EU subsidies, Bardeau was a strong supporter of Romanian integration in the European Union and used all his high-ranked relations to politically support Romania in the race for adherence. At the time when the European Commission delegation was led by Jonathan Schelee, when visiting the Banat region, Mr Scheele was a regular guest of the count. In 2005, Bardeau was invited to become an officer with the National Order of Merit by the Romanian Ambassador in Vienna.

In 2000 the Austrian count established SC Bardeau Holding Romania SRL, with headquarters in Timisoara, and started large-scale land acquisitions, offering ridiculously low prices to the owners of the land, local small farmers. In time, the holding registered more and more companies, all huge profit makers. In just a few years the count became one of the most influential farmers in Romania. Another key factor in the holding’s swift development was European funds for agriculture, successfully attracting tens of millions of euros through the EU’s SAPARD program.

The king of lumber

In 2007 Bardeau discovered through his scouts, that Arges County has a lot of excellent quality lumber in its forests. Profiting from their huge reputation, the Holding teamed up with fellow Count Eszterhazy, creating SC Esterhazy Bardeau Silvicultura SRL (company presentation document here) and began large-scale acquisition of forest properties and alpine pastures.  He could later develop tourist stations or renewable energy systems such as wind turbines.

Bardeau payed 2000-2500 euro/ha of forest, although a hectare of spruce is worth 15000-20000 euros, if it is at least 100 years old, not counting the cost of the land. Following huge destruction and various fraud cases signaled by a regional NGO, the local authorities decided that ”after one year that these woods were ruthlessly devastated by these barbarians, the forests will be reintroduced into the forest surveillance structures of the state.” 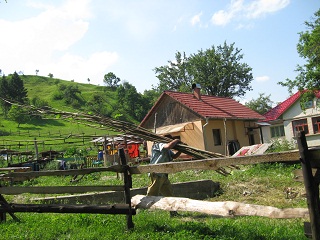 In 2012, Bardeau Holding Romania had over 500 court cases open, all regarding land tabulation benefits and violation of land property rights. The holding used its power to bribe local law magistrates to intervene in these cases. Carmen Obarsanu, a regional lawyer defending the rights of the smallholders stated then: “It seems that Sorin Gherghisan (bribed magistrate) risked everything to give weight to the cases in which peasants from Caras-Severin were deprived of their lands by the Austrian count Andreas von Bardeau”. The National Integrity Agency opened an investigation in the case of this magistrate.

Indeed, the case of Bardeau Holding meets all the criteria for a typical case of landgrabbing: large-scale land acquisitions based on speculation, implementation of an industrial farming model, ignoring its social and environmental impacts and using the influence of personal power, prestige and money to deepen these already huge investments, disregarding the impacts on the local population and rural development.