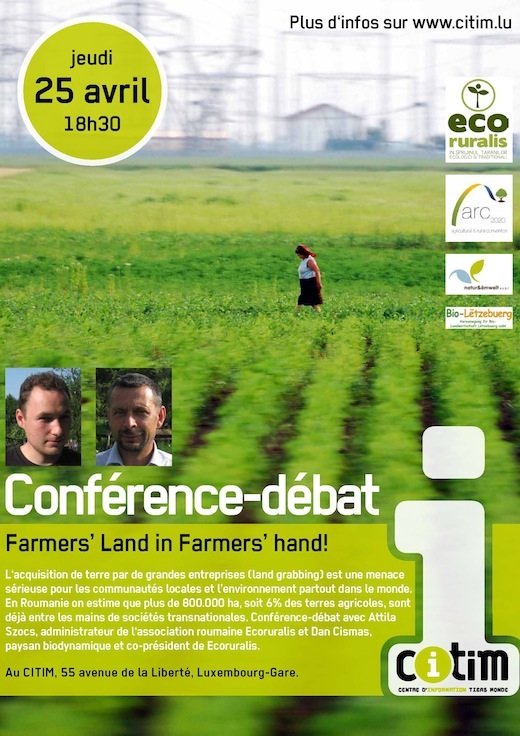 The ARC2020 Speakers Tour is underway! From 21 – 30 April, two Romanian farmers will be visiting cities including Paris, Amsterdam, Berlin, Vienna, Luxembourg and Brussels to raise awareness of the social and environmental impact of Landgrabbing in Romania.

READ ALL THE LATEST NEWS HERE!

Romanians confront land grab ‘scout’ 17th January 2013, Markthalle Neun, Berlin  As much as 10% of Romanian farmland could be in the hands of multinational businesses, but there are no official statistics to establish the full extent of the corporate takeover. Speaking at a Green Day event in Berlin, organised by ARC2020 just a couple of days before the January 19 demonstration, Romanian peasant leader Willy Schuster and ARC2020 correspondent for Romania Attila Szocs demolished the corporate platitudes of Germanagrar co-founder Simon Wolk, who suggested that two hectares was not a big enough holding to be profitable. “What we have is worth more than just money,” Schuster snapped at Wolk, who made heavy weather of a heated round table discussion. During the debate, he admitted that Germanagrar had this year paid contracting peasants just EUR 140/hectare or 600kg of wheat per hectare for the use of their land under the terms of poorly-explained and often murky contracts covering ten years or more. “They are strangling us” Schuster added. Since Romanian law forbids foreign nationals to buy […]