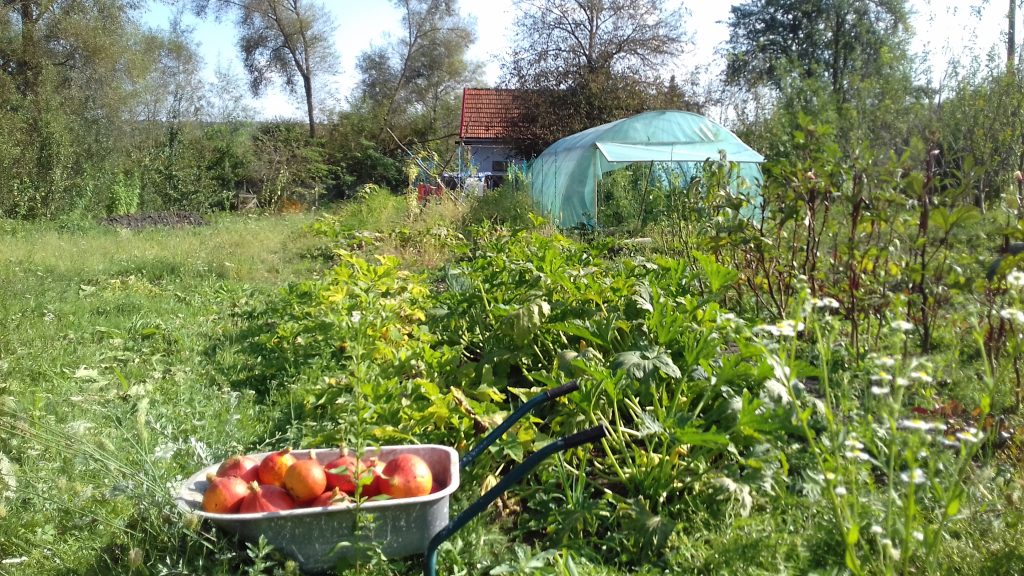 We are back on Brindusa’s farm in Romania as she reflects on what worked in 2018 and what she will work on in the coming year. Not to be underestimated: the importance of steady, reliable relationships to consumers keen for larger quantities. 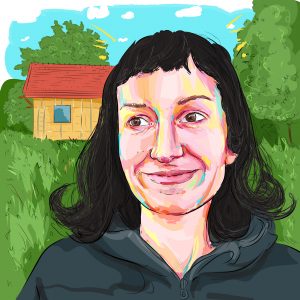 It’s early winter and my partner just returned from delivering sunchokes (aka. topinambur) to the only restaurant in the city with which we have made a relationship. We had just a  few patches of this plant, a vigorous and nutritious sister of the sun flower, and they yielded almost 100 kilos! We kept half of it for us to eat and for seed, to plant at the back of the garden for next year, and are happy to sell the rest. As new growers starting out, we learned that it’s quite helpful to develop steady relationships to buyers that need larger quantities constantly and are eager to try out less common produce.

This season, our first season to get attested as small-scale producers, we made most of the sales in Black Beauty zucchini, with over 200 kilos going to the same restaurant. They know us now, and expect us to propose more special produce. It’s obviously special in quality, because it’s grown with agroecological methods, but they are also a less common vegetable variety in Romania.

As the season comes to an end, we look at our garden harvest spreadsheet and evaluate the year. Of course it can all be done better. We had a poor tomato and this meant losing those that were not in the tunnel to the powdery mildew. It was a great season for water-loving crops because the summer was full of rain (unlike in Western Europe), and a weak season for draught-resistant crops, like the special okras we had.

The most important change for the future is to start with a set up of permanent beds at the beginning of spring. No need to plough in autumn, like all my neighbours do, once you manage to grow cover crops in winter, or cover the soil with sheets or better yet, compost!

My main mentors this year have been Charles Dowding for no dig gardening and Richard Perkins for regenerative farming and the importance of having a mixed animal-vegetable system. I feel I learnt a lot by just watching their practices focusing on improving soil health, which they document in instructive videos. For a biodiversity landscaping that feeds both pollinator and predator insects, I learnt a lot from Living Web Farms.

It was also a year of life-changing choices, as I gradually accepted that a fertile vegetable garden needs an animal’s touch, whether in manure, or grass management between the trees. As I worked the land and tended to the plants, even trying to do as little disturbance as possible, I still caused the death of some insects and promoted some animals to the detriment of others. What did that teach me? I had been a vegetarian for the past 11 years of my life, but looking at the need to intervene into an ecosystem to make a garden meant causing the death of some creatures. So, I could not longer claim that feeding myself was perfectly harmless.

I also became more aware of the great ability of animals to regenerate soil, when pastured at the right density.  So we decided to try out bringing in a few chickens, my partner and pets being meat-eaters. We built a chicken tractor we would move everyday so they could graze, fertilize, lay eggs and we would ultimately eat them. We have not got to that part yet but it was amazing to see how well they do their job at keeping the grass low and preparing the beds. If we ever decide to offer grass-fed chickens for sale, I intend to invite people to slaughter their own chickens, to be able to feel what consuming meat implies and maybe make a few vegetarians in the process.

There’s still a lot of to do in terms of farm infrastructure. One year into moving into our straw-bale home, we built the little building that contains the solar shower and compost toilet and haven’t added anything since. This year, each time we harvested in the summer, we needed to bring the veggies in the house to keep them cooler, and since our living space is very small, it soon became an issue. So we’re looking to build a storage space with a packing and washing outdoor area where we can re-use the water for irrigation.

We’re also extending garden area by renting the unused garden across our yard and planting some perennials into friends’ gardens. Time could become an issue in the next season, as we’re both employed presently, albeit not full-time, and with the advantage of home-office. We entered the vicious circle of selling our time to be able to invest in the farming operation that also needs time and effort to develop. Somehow we and time will balance things out.

About Brindusa Birhala 3 Articles
Brindusa Birhala chose agroecological farming in her home country, Romania, after several international study programmes abroad. She graduated with a Masters of Environmental Governance in Freiburg, Germany, and International Masters of Rural Development in Gent, Belgium. Brindusa experienced peasant food production in many parts of the world during her travels, from Nicaragua to India. This encouraged her to tap into the peasant practices of her home country Romania, which in turn led her to re-settle in a small village in the west of Romania. Now she is starting out as a market gardener, a homesteader and a food activist. The latter manifests as access to land projects for small-scale new comers into agroecological farming. She is part of the coordination committees of Eco Ruralis, the national grassroots peasant representation, ASAT, the Romanian network for CSA farms, and ALPA the newly established organization for access to land for agroecology. When needed, she is also the village bike mechanic.

In David Attenborough’s foreword to The State of Nature 2016, he writes: “…Nature is in serious trouble and it needs our help as never before.” The report singles out intensive agriculture and climate change as the two most serious threats to biodiversity in the UK. Agriculture still occupies 75% of the UK’s land area and the declining fortunes of mixed farming has led to consolidation and specialisation on a massive scale at landscape level. It is hardly surprising then, that the environmental impact of farming should be an issue of public concern. Look at this picture of a field with an over-wintered crop above: it is typical of thousands up and down the UK. Beneath the serried ranks of seedlings, criss-crossed with tracks that reflect the width of the spraying boom which passes periodically, countless farmland species struggle to adapt to what is often a hostile environment. The State of Nature editorial team identify earlier planting and regular spraying as important underlying factors in the way intensive farming impacts biodiversity. The study draws on long […]

Oliver Moore attended the 2nd Agroecology Europe Forum in Crete recently. In the first of three reports from the island and event, he tells us here about the one of the field trips. This was a visit to the inspiring Apo Kinou social coop, where production, distribution and consumption are all under collective control. […]