Alongside the main news coverage and headlines in Greece, there are a number of smaller stories emerging. The unprecedented return of Greek city dwellers to rural areas for example is now a well-recognised, and internationally-covered, phenomenon. A growing number of small-scale initiatives are also beginning to attract attention. 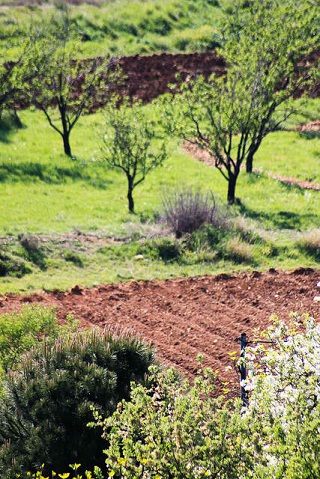 In times of real financial crisis, as more and more people are becoming hungry in Greece, human feelings of empathy, solidarity and mutual aid have been rising and giving hope. Farmers from Ierapetra for example have been distributing their vegetables for free in the centre of Athens.

Elsewhere, initiatives have also been set up to help farmers whose products are being bought for very low prices by big distributors, or those who cannot sell anything at all. In March I wrote about the positive impact and reactions to a volunteer initiative from potato farmers. Today I came across another.

The “Become a Farmer” scheme is an electronic platform that aims to link rural farmers with city consumers. The idea is very simple. The scheme is offering city dwellers the chance to rent a patch of land that belongs to an farmer, who will then cultivate the land for them. You can select the size that corresponds to the needs to your household. According to a UK newspaper, the website has already had around 50,000 visitors in the Athens area alone. More than 5,000 of those have created accounts online and tried to rent a plot of land. More than 900 farmers have said they want to join up, and more than 1,000 emails have come in from people praising the idea and asking when it will be available where they live. This week, deliveries to the first 100 families got underway from the first four farms which signed up.

The scheme enables farmers to avoid the middlemen and achieve better prices for their products. Consumers also benefit from having the products delivered directly to their home.

The initiators of this project said: “We started our ambitious project to reorganise, to overthrow, to ‘break’ the market and offer an innovative service creating a tool to bring in direct contact, producers and consumers. The idea came from Dimitris Koutsolioutsos, who assembled a team consisting of people with a common vision of a better quality of life in the urban centre.”

While politicians discussing the future of our Common Agriculture Policy in Brussels, people on the ground need to create their own solutions as it is a matter of survival. I am wondering if self-evident practices like this one or the idea to start moving to food-sovereignty and self sufficiency can fit into any discussion on the CAP reform. As we are the people on the ground, let’s help to spread these kind of ideas.

Four innovative and committed agroecology initiatives showed how they stepped up in times of Covid19 at a webinar organised by Forum Synergies and ARC2020 last week. And dozens, from all over Europe and beyond, got involved in the conversation. Alison Brogan tells us about this event which provided a moment to reflect, some key contemporary learnings, and which sowed the seeds of further action. […]