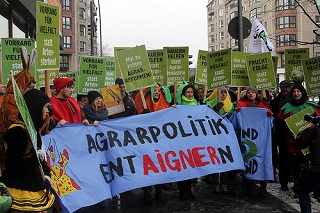 On arrival at today’s meeting, the ministers were greeted by a loud and colourful reception of more than 60 citizens. With signs and chants, they called on the ministers to support a greener and fairer EU agricultural policy.

The action was organised jointly by the campaign ‘Meine Landwirtschaft’, the campaign network ‘Campact’, the Small Farmers’ Association, ‘Arbeitsgemeinschaft bäuerliche Landwirtschaft’ and Young Friends of the Earth Germany, ‘BUND Jugend‘. Dressed as corn, peas, carrots, apples, bees and hares, the costumes illustrated their demands for ecological diversity in the fields.

“Exploit all available tools” – German platform on the Eco-Schemes

German agriculture will need a shake up to meet environmental targets and challenges. Here the platform of 20 food and farming organisations share their response to the proposed eco-schemes in the post-2020 CAP. […]

Glyphosate use allowed to continue in Germany