It has now been three weeks since the Good Food Good Farming campaign first told Europe’s citizens to go mad…and they are!

Go M.A.D. (Go Meet A Deputy) is the latest action from ARC2020’s Europe-wide campaign on the reform of the EU’s Common Agricultural Policy (CAP). The action was launched following the disappointing outcome of the vote which took place in January in the Agriculture and Rural Development Committee of the European Parliament (COMAGRI) on the future direction of the CAP 2014 – 2020.

The Go M.A.D. action is urging European citizens to directly interact with their local Members of the European Parliament (MEPs) and ask them how they will vote during the final plenary decision on the CAP reform in Strasbourg on 13th March 2013.

Since the official launch of the action, the madness has spread across Europe with meetings taking place in Austria, Belgium, France, Germany, Italy, the Netherlands and the UK; with more planned for the coming weeks.

The action has also been endorsed by key actors in the European food movement including Carlo Petrini, founder of Slow Food International, Sarah Wiener, a well-known TV celebrity chef in Germany, and charismatic French MEP, José Bové. Earlier this week, Monday 21st February, Sarah Wiener decided to Go MAD herself, meeting up with MEP Dr Wolf Klinz (FDP) for a personal interview. You can find all the videos and written testimonials of meetings held so far online here.

If you want to Go MAD, meet your MEP and find out their position on the future of our food and farming, there is still time, but you must act fast. Find out how here: http://www.goodfoodgoodfarming.eu/gomad/first-steps.html

On 13th March 2013, all MEPS in the European Parliament will vote on the dangerous proposals endorsed by COMAGRI in a plenary session in Strasbourg (see table below). From a practical point of view, this is the last chance to defend greening. A majority of all 754 deputies, who are not dependent on the agricultural lobby but want to be re-elected in 2014, will need to reject what their agrarian colleagues are about to present as no less than a partisan compromise. MEPs generally follow Committee and expert group recommendations, but maybe a meeting with those who will re-elect them will help them think differently. Let’s Go MAD! 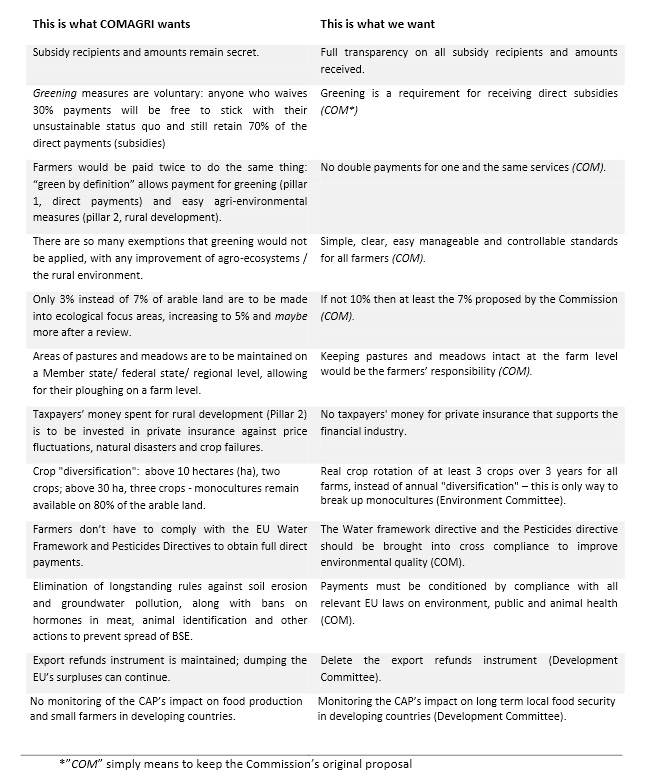 Young people and the CAP […]