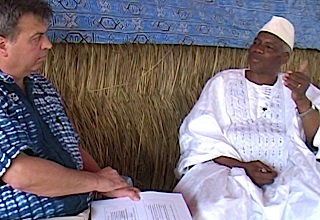 Industrial agriculture transfers its knowledge and research findings to other parts of the world while making some standardised assumptions. The commonest one is to assume that there is no value or knowledge in existing agricultural methods: this is easy to spot in development projects, although it is by no means confined to the poor world.

By assuming tabla rasa, it is easy for technocrats to imagine that they should sweep aside local ways of working in favour of industrialised methods. “Much agricultural modernisation has induced the dependency of local farmers on external inputs, such as energy or chemicals, not to mention seed,” explains Michel Pimbert, principal researcher for the International Institute for Environment and Development (IEED).

“However, the farmers we have been talking to in West Africa have challenged these assumptions and want to have more control of their own farming destinies.” Pimbert was recently in Accra for a policy dialogue between farmers and the Alliance for a Green Revolution in Africa (AGRA) chaired by the UN special food rapporteur, Olivier De Schutter.

“It was clear that the organisation concerned was working to create localised bread baskets with more intensive methods and technology, but was neglecting less favoured areas,” Pimbert observed. “The farmers, however, were challenging this top-down style and already had topics they wanted to see researched. They didn’t want to be locked into adopting industrial technology and external markets, with the ensuing dependency on external suppliers and retailers.”

To generate a return, high-capital or high-tech agriculture requires uniformity (soil fertility; planting and crop management, for instance), whether it is in Europe or anywhere else in the world. The dependency industrial agriculture imposes on external inputs and distant markets is seen clearly by farmers across West Africa as a threat to their hopes for food sovereignty. Since agricultural research is externally funded, it can also be externally oriented and work against the needs and interests of the majority of farmers.

These fears were expressed in open sessions organised by IIED, two of which were transmitted to London in February by satellite link. Among those present at Westminster were staff members of DFID, the UK government’s development agency which co-funds AGRA with The Gates Foundation and the Swedish government.

Despite a block vote by the EU, global corporate impunity was dealt a blow following a vote in Geneva. Urgenci’s Judith Hitchman reports. […]