Methods by which the EU Commission approves pesticides without the full dataset were criticised in a Decision by the EU Ombusdman  yesterday (Monday). This practice “appeared to constitute maladministration” according to Emily O Reilly.

Read the Decision in Full

“The Ombudsman noted that the Commission admitted” specific pesticides in question were “approved at a time when relevant parts of the assessment could not be completed because the applicants had provided insufficient information (data gaps). EFSA [European Food Safety Authority] also pointed out several concerns as regards each of these substances. Even though it suggested mitigation measures at the level of the Member States, the Commission still granted approval. It did so even though it appeared to lack sufficient documentation in order to be able to take properly informed decisions…”

She described this “procedural course of action” as “unlawful” and that “taking into account the possible consequences for human health, animal health and the environment, such inadequacies” were “particularly worrying”.

The introduction to the Decision overviewed the performance of the Commission’s Health service DG SANTE and found that “the Commission may be too lenient in its practices and might not be taking sufficient account of the precautionary principle”.

The case was taken by a complainant acting on behalf of Pesticide Action Network.

The organisation noted:  “Several other shortcomings in the pesticide decisions were observed by the Ombudsman such as a lack of requirements to protect the environment (pnt 44), a lack of systematic verification of protective measures (pnt 50) and even cases of approval when no safe use was demonstrated by Food Authority EFSA (pnt 28).”

The Ombudsman made a number of recommendations, and “requested the Commission to submit to her a report covering a number of specific points within two years of her decision”.

According to a statement by the Ombudsman “After examining the Commission’s responses to her proposals, the Ombudsman considered the Commission to have taken a constructive approach to restricting the use of the confirmatory data procedure [the pre-approval without full data process] . The Ombudsman was also generally satisfied with the Commission’s stated intention to conclude the assessments of ten substances that it had earlier approved despite the lack of adequate scientific information regarding their safety at the time of the approvals.”

The language in this “Decision” at times seems less than committal. Phrases like “appears to” “may be” “might not be taking sufficient account of” are peppered throughout the document. So we queried  the Ombudsman on this via twitter. See below. 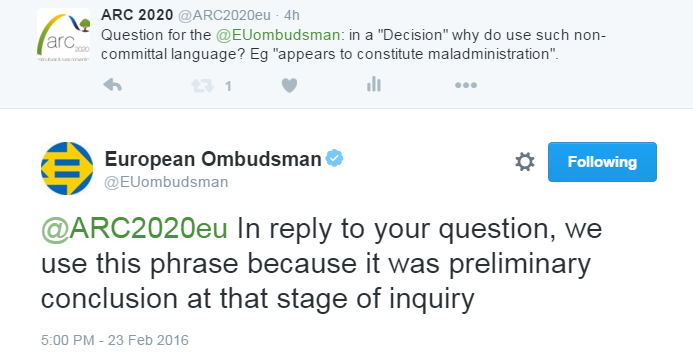 EFSA slammed by Pesticide Action Network over its methods

Worrying trends in how pesticide safety is measured have been uncovered by Pesticide Action Network Europe. […]