Toxic pesticides residues in fruits and veggies in Greece: news of the systemic, the banned and even the illegal.

This year Greenpeace Greece has twice tested several fruits and vegetables for pesticide residues. Foods consumed daily such as apples, pears, peaches, bananas, potatoes, carrots and courgettes were found to carry toxic residues and in some cases illegal ones. 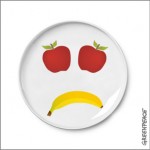 More specifically, between April and June 2013, Greenpeace tested 34 samples of 11 kinds of fruits of vegetables that are sold in the Greek market, most of them of Greek origin.

The samples were found to carry 32  highly toxic pesticide residues that are dangerous for humans and the environment. For instance, the market authorisation of several of these pesticides warns that: Thiacloprid – found in apples and pears- is likely that can be carcinogenic to humans, or Linuron – found in carrots- can harm an embryo during pregnancy, or Azoxystrobin, Chlorpyrifos, Deltamethrin, Indoxacarb, Imazalil, Linuron, Pyridaben, Captan – found in courgettes,  carrots, apples, pears and bananas) – are highly toxic to aquatic organisms or can cause harmful long term impacts to the aquatic environment.

Half of the active substances that were detected belong to the category of systemic pesticides. Which means that they do not stay only on the external skin of the fruits and vegetables but can enter their tissue.

In addition, 8 of these active substances are known to also harm bees (see my previous blog), while some the pesticides that were detected are banned in the European Union for use in agriculture.

It seems that in Greece there is a real problem with illegal trade of chemical pesticides which has been worsened with the economic crisis.

According to various sources, illegal pesticides enter the country from the neighbour Balkan countries (Bulgaria, Macedonia, Turkey) in cheaper prices. In June, the Ministry of Agriculture announced fines of 268.100 euros to 93 traders for illegal trade and use of expired or non-authorised chemicals.

Even the National Association of Plant Protection  confirm that the problem of illegal pesticides is a reality that concerns the chemical producers, who have started a public campaign related to the dangers involved with the illegal trade as they obviously lose money from the illegal practices. (e.g. sources mention that one can find even DDT in farmers’ stocks).

The Greek state needs obviously to take tighter measures to control the problem of illegal pesticides that harm the health first of all of the farmers, then ours and of course the soil and the water. But what is more important is the Ministry of Agriculture implementing a national action plan to make a real shift towards sustainable quality agriculture that will boost Greek agriculture and economy. The production of local, healthy, unique, ecological products, with no pesticides and gmos can give Greek agriculture a competitive advantage that really needs right now.

Today, citizens protested outside of the German chancellery ahead of next week’s European Commission vote on the matter. […]