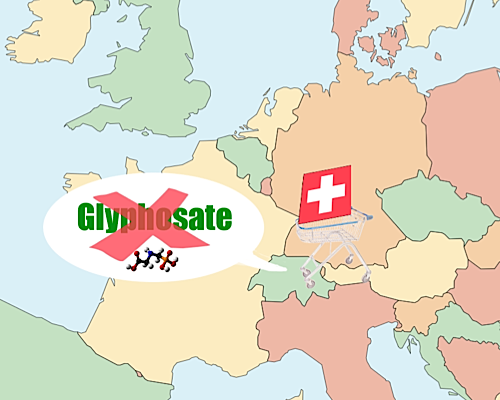 The French farm minister Stéphane Le Foll announced earlier this month that non-Hodgkin lymphoma is to be recognised as an occupational illness among farmworkers. The change comes two years after the minister asked the French national medical research body INSERM to investigate the health risks encountered by workers routinely exposed to pesticides.

As well as being concerned for the agricultural workforce, Le Foll and environment minister Ségolène Royal organised a review of retail products containing glyphosate used by gardeners around their properties. The outcome is a ban on these products that will  take effect in 2018. Glyphosate products will only be available through licensed outlets, where integrated pest control methods will also be promoted. Preparations for this change will start with the retailers concerned in 2016.

Switzerland’s two largest retailers, Migros and Coop, have been listening to their customers and are already taking retail products containing glyphosate off their shelves.

The Coop operates nearly 2,000 shops both inside and outside Switzerland, while Migros operates 700+ outlets, most of them in Switzerland. “We had already decided to withdraw glyphosate from our own-label ranges earlier this year,” Migros told ARC2020, “and in May we speeded up the withdrawal by removing the two remaining branded products.”

The Swiss Coop announced a withdrawal of glyphosate under the precautionary principle, emphasising that it has only ever sold diluted, ready-to-use products. “Coop and Coop Brico+Loisirs are taking into account the doubts of the population, as well as its health,” Coop declared.

The Swiss federal agriculture office (OFAG) issued a doggedly determined defence of glyphosate following the WHO reclassification, restating that the active ingredient had been tested exhaustively. Modern analytical tools being so much more sensitive than ever before, OFAG was not apparently unduly concerned by the discovery of glyphosate residues in the urine of Swiss citizens. Despite OFAG giving glyphosate a green light in Swiss agriculture, Switzerland bans its use on cereal crops as a dessicant.

These decisions, which mirror similar withdrawals and limitations around the world. Sri Lanka, Brazil, El Salvador, Columbia and Argentina are among the countries to place restrictions on glyphosate in recent times. A major spur has been The International Agency for Research on Cancer (IARC) – the World Health Organisation’s cancer agency –  reclassification of the active ingredient’s carcinogenicity. The IARC on March 25th announced that “the herbicide glyphosate was “probably carcinogenic to humans”.

According to Dr. Mae Wan Hoe and Dr Nancy Swanson, the IARC, which is the world authority on cancer, leading authority are especially noteworthy for their independence. “A Working Group of 17 experts from 11 countries met at IARC headquarters 3-10 March 2015 in Lyon, France. The meeting followed almost a year of review and preparation, including a comprehensive review of the latest available scientific evidence. The experts were selected on the basis of their expertise and most importantly, the absence of real or apparent conflicts of interest. The Working Group considered “reports that have been published or accepted for publication in the openly available scientific literature” as well as “data from governmental reports that are publicly available”.”

If the EU isn’t careful, Romania may become one of the primary breeding grounds for GMOs. […]