Greet Goverde-Lips, secretary of Platform Aarde Boer Consument writes: Any day now EU politicians will fix the European budget for the next seven years. The Commission aimed for 1,000 billion euros. Agriculture accounts for about 40% of the budget, and about half of that goes to income support for farmers. With a different agricultural policy that yields cost-covering prices farmers would no longer depend on subsidies. That would save 25 billion euros a year; 175 billion in seven years.

The budget allocations for European agriculture are considerable. They have continued to rise steadily on aggregate, despite the many inefficiencies pointed out by many commentators. Click here to see the figures in a table.

The agricultural policy in the EU is currently in the liberalisation mode. Farmers in the EU have to compete with colleagues from all over the world, even though production costs in some countries are much lower; the playing field is not level at all. Without additional income from the EU budget farmers would go bankrupt. Leaving the food production for half a billion Europeans to faraway and maybe not very sustainable countries is not an option.

When we don’t keep globalising but start regionalising – producing primarily for our own market – a lot of money from the agricultural budget can be freed for other purposes. This seems unrealistic but it isn’t. Countries that restrict their supply to domestic demand can protect their farmers by means of tariffs up to the level they have agreed on in the WTO, and that is what countries like Norway and Switzerland (and Canada for dairy, eggs and poultry) have been doing for years. In Canada for instance they have not bothered about the free market ideology in agriculture, knowing that it doesn’t suit agriculture anyway. So the system of regulating the agricultural market has been fine-tuned in the course of the last 60 years and works very well. There government and producers decide together in Marketing Boards about the quantity and quality of basic products. The processing and retail sectors can join in the talks but don’t have the last say, as in Europe. The result is that farmers get 54% of the supermarket price for their milk, whereas they get only about 30% in the Netherlands.

In 2010 a group of 21 prominent scientists from various European countries proposed a ‘New European agriculture and food policy’. They also opted for the production of basic foods for the internal market as a starting point. The study shows that the consumer would spend 14.6 % of his income on food instead of the current 14%, for supermarket prices consist for only a minor part of agricultural prices. That increase would be offset by smaller contributions to the EU budget.

The new policy – including more ‘greening’ – would cost only €30 billion a year instead of the current €55 billion. (J.M. Boussard and others: Assessment of the budgetary effects of the New Policy, 2010)

Many European farmers would like to move in that direction, as became evident from the demonstration in Brussels on 26 November. The Dutch Dairy Farmers’ Union (linked to the EMB) would like to see a European Milk Marketing Board established, facilitated by the EU. For what many EU countries still want – unlimited production of milk – is going to cause overproduction. Margins for the farmers have already fallen by 30% since 2007, and in the next few years the market will be flooded by 60 billion more litres of milk, e.g. from India. This will be disastrous for European dairy farmers, and moreover surpluses are usually dumped as milk powder that distort markets in the developing countries. As far as the arable farmers are concerned: they would prefer to keep out soy and revive the European protein production (peas, lupins). That would also be good for the soil because of the nitrogen binding effect of those crops.

What would it mean for Dutch exports? Products remain largely within the EU borders: only 10% goes to the world market. And that includes luxury products such as flowers , whereas we are only talking about basic food products here. There would be advantages to limiting production and exports: better prices for farmers, and in a more regulated system there is no need to exhaust nature because of low prices on the world market. We could enable the farmers to go for real ‘greening’: soil improvement, more biodiversity, cleaner water and the like.

The fact that the EU and the USA give their farmers income support on the ‘free’ market is very unfair. They get away with it because they throw their weight around in the WTO. The support enables them to market their goods below the cost of production; that is not a level playing field, it is unfair competition with other countries that can’t afford to support for their farmers.

Very strange when you come to think of it, that the EU is willing to pay 25 billion a year to keep up the appearance of a liberalised agricultural market. 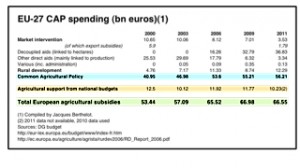 The CAP and Climate Ambition – Myth vs Reality

CAP supposedly is climate ambitious, but it fails to really deliver. So what could be done differently? Joost de Jong of the Dutch Transition Coalition of Food Systems gives us some suggestions. […]