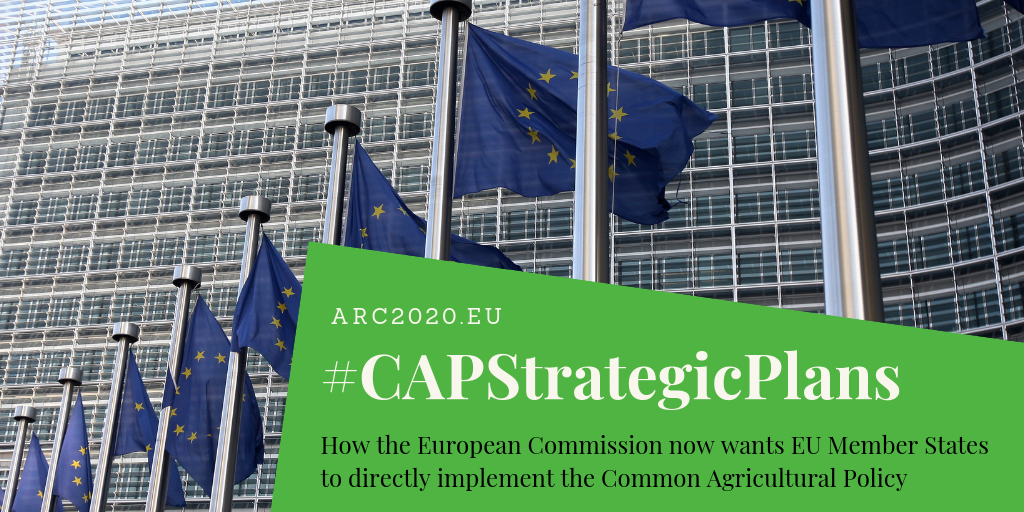 Hidden away in a footnote, away from the fanfare of the launch of the EU Green Deal’s Farm to Fork and Biodiversity Strategies, was a nonetheless crucially important document. A document that shows how to tie together the EU Green Deal and the CAP Strategic Plans process. In other words, a document that links vision to the practical  policy work member states are currently conducting. So what’s in it, what’s missing, and what does it say about power relations between the Institutions and the Member States?

“COMMISSION STAFF WORKING DOCUMENT Analysis of links between CAP Reform and Green Deal” . This 23 page document came out on Wednesday 20th May. It opens with a background explanation of the Commission’s CAP Communication 2018 (Commission CAP Communication 2018)  including its proposed green architecture – and then it gets down to the details.

Section two is where all the action is. This section deals with the “synergies or gaps” between Green Deal and the CAP Strategic Plans currently being formulated by the EU member states. It opens by suggesting that “to deliver the European Green Deal, there is a need to rethink policies” in a number of areas including “food and agriculture”.

What emerges from this document is intriguing. What will this mean for how the CAP SPs, send back to the Commission by Member State, will actually be interpreted by the Commission? Does this mean that the ambition will have to be veritably higher than might have been the case up to now? Where is the power balance between the Commission, its Green Deal and the Member State? And, crucially, will the Commission reject plans that do not show the required adjustment to the EU Green Deal?

“(T)he Commission will work with the Member States and stakeholders to ensure that from the outset the national strategic plans for agriculture fully reflect the ambition of the Green Deal, the Farm to Fork Strategy and the Biodiversity Strategy”. In addition, the Green Deal established that “the Commission will ensure that the strategic plans are assessed against robust climate and environmental criteria”” (there are double quotes here because the Commission is quoting itself).

Interestingly, it adds that “in light of the Green Deal challenge, the role of the Commission in this preparatory phase needs to be further reinforced.”

“The proposed CAP Strategic Plan regulation also requires the Commission to carefully consider the coherence of the draft CAP Strategic Plans with the environmental and climate related needs identified in the planning instruments emerging from the EU legislation listed in Annex XI of the proposal. This will allow the Commission to take account of needs identified in the European Green Deal and assure that CAP support is not targeted at practices that are considered environmentally harmful in its decision on approval of the plan.”

Here are the annexes, including Annex XI: CAP Communication Commission 2018 Annexes. (These are regulations and directives related to climate, biodiversity pollution etc.)

“More specifically, the Farm to Fork Strategy and the Biodiversity Strategy address the need to reduce the use and risk of pesticides, the use of antibiotics and fertilisers in agriculture, to increase the share of organic farming and to enhance the share of landscape elements and set aside for nature as well as to lead to stricter animal welfare standards. In addition, the strategies provide for a range of non-quantitative targets, including the need to stop the decline of farmland birds and insects, particularly pollinators.”

So having named pesticides, fertilizers, antibiotics, organics, landscape elements, set aside for nature, animal welfare standards, and biodiversity loss, the document then states: “The strategic plans will need to reflect an increased level of ambition to contribute to reaching these targets.”

This is a crucial statement. Remember that the targets for these things were actually surprisingly ambitious – 25% organic farming, 20% reduction in fertilizer use, and to reduce by 50% the use of more hazardous pesticides ,and all by  2030, as examples.

In this context, and with the strategic plans currently being written up, upwards adjustments of targets in these areas are the logical conclusions of this statement. Below see Indicators in Annex I of the proposed CAP Strategic Plan Regulation associated to Green Deal targets. 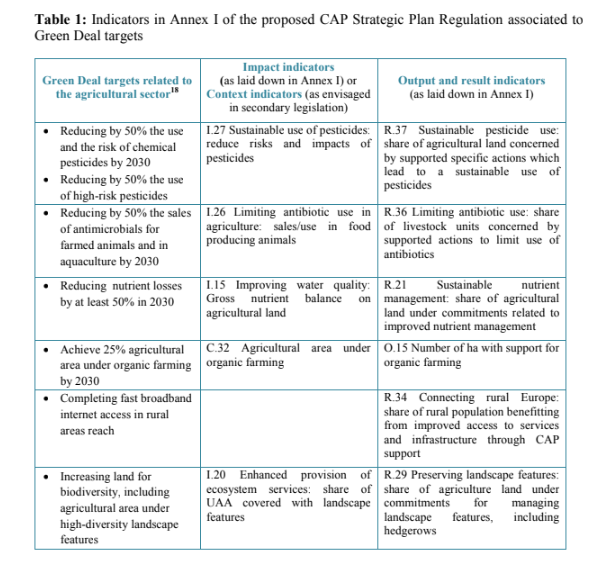 There is one noticeable absence – for broadband – and that’s not necessarily an easy one to solve. Nevertheless, there are indicators for all others. Other annexes are mentioned here too as being relevant, including Annex III on GAECs-  Good Agri-Environmental Condition, annex I and annex XI again.

Improved (i.e. more standardised and systematic) data is however also referenced – which is a significant issue in the EU, with member states not thus far operating to completely uniform reference points.

Fostering the use of sustainable farming practices

Here primarily there is a repetition of what is already in the CAP SPs  regarding conditionality, eco-schemes, Pillar 2, fast broadband, market stimulation for organic (and an organic action plan), Horizon Europe/EIP AGRI, Integrated Pest Management, EU forestry strategy and Agricultural Knowledge and Innovation System (AKIS).

One noteworthy paragraph is on carbon sequestration:

The change resulting from the adoption of sustainable farming practices throughout the cultivated area in the EU should not only reinforce the downwards trend in GHG emissions of the farming sector but also ultimately turn agricultural soils into carbon sinks. Identifying better methods for measuring carbon removals in agriculture is the first step to enable payments to farmers for the carbon sequestration they provide. In the future CAP Strategic Plans, Member States will be able to use these rules to design CAP payments based on the carbon sequestered. Private companies could also be interested in purchasing such certificates to support climate action, thus providing an additional incentive (on top of the CAP rewards /payments) to farmers for carbon sequestration.

This section also repeats CAP SP elements, and as often is the case, chimes in with other policy imperatives, including sectorial supports and the retention of some coupled income support. So while this statement is undoubtedly interesting:

“The Green Deal presents new opportunities for all operators in the food value chain and specifically it announces proposals to improve the position of farmers in the value chain.”

The Unfair Trading Practices regulation already does this. Its up to member states to implement, which the document states, is to be “transposed by Member States by 2021.” this will improve farmers’ position vis-a-vis retailers on late payments, short notice cancellations and other issues.

The Song Remains the Same

The remaining sections more or less reiterate what’s above, making reference to how the Green Deal can work with the CAP SPs. The main emphasis, however, seems to be the prevention of backsliding or weakening of the legislation. Previous CAP Communications – in particular the 2010 variant – were watered down over years in negotiations, with both the Agri Committee and the Council of Ministers really weakening its environmental ambitious  over years of negotiation.

It is noteworthy that the following two sections then, refer to retention of key aspects of the CAP reform proposal. these sections refer again to conditionality, eco-schemes and so on. The previous CAP reform processes saw these sorts of elements weakened, via changes in weighting or the changes to allow non-ecological practices to be brought in – pesticides in ecological focus areas being a prime example. (See our CAP greening section for the history of this)

What is worth commenting on is the idea of “ring-fencing funding and further developing provisions for Pillar I eco-schemes”; greater clarity regarding the scope of eco-schemes from the commission.

The final section on “Possible action from Commission services to assist effective implementation” makes reference to transparency, dialogue with Member States, coupled support and data – but, strangely, does not refer specific transparency procedures: “to approve the CAP Strategic Plans, Art. 94 of the Commission proposal about transparency procedures ES should be respected” as ARC2020 policy analyst Matteo Metto says.

It is hoped this is an oversight, one that will be rectified in the coming weeks.

This document was released with no fanfare whatsoever, in a week when there was much animated communication. However there are some things which are especially interesting in this important document.

For one thing, it attempts an application of the relevant EU Green Deal components – the Farm to Fork and Biodiversity Strategies – to the CAP strategic Plans (SP)  process.  However, it does more than this. It sends a signal to the member state that the CAP SP needs to show ambition –  and more than has been shown so far.

The implicit impression is left that the member state plans can be send back for a second draft if they aren’t strong enough in their public good delivery, from environment to the farmer’s position in the supply chain.