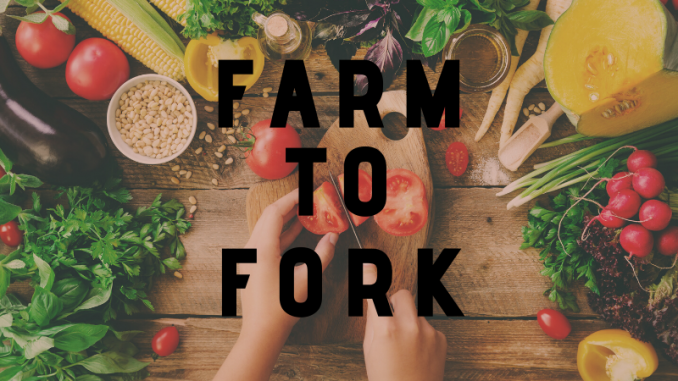 Unusually for these times a cautious optimism is in the air. Last week the European Commission unveiled its much anticipated Farm to Fork strategy, and stuck to its guns with relatively ambitious new targets for agriculture. Predictably enough, the agri-lobby was not happy. Louise Kelleher walks us through the reactions.

The European Commission has caved to pressure from the eco-lobby. At least that’s the assessment of Spain’s Young Farmers Association (ASAJA) which labelled the Farm to Fork strategy “a grave and unjustified attack” on EU agriculture.

Farmers in Spain weren’t the only ones riled by the ten-year targets set by the Commission for pesticides, antimicrobials, excess nutrients and organic farming. ASAJA decried the new direction of travel as a “heavy blow for European farming”. Farming organisations around Europe were similarly upset by the Farm to Fork strategy that was announced on Wednesday.

COPA-COPEGA set the tone for its member organisations around Europe by raising the now-familiar spectre of food security scares. “Let’s make sure that these strategies don’t end up endangering our Food Security and rural economies – leading to outsourcing of our food production,” warned COPA President Joachim Rukwied.

My opinion from the perspective of a farmer: pic.twitter.com/qO7vvHKpGz

“A comprehensive independent inception impact assessment must be conducted before any legislative action is taken,” cautioned COPA-COPEGA. It also called for “coherent EU policies and sufficient funding”.

“Targets are Not Solutions”

COPA-COPEGA questioned the idea of setting these targets in the first place, describing it as a “blindfolded approach”. The Commission is putting the cart before the horse by announcing targets before impact assessments, it argued.

Why do targets come before impact assessments?

What will happen with the impact assessments show that they are not realistic?

F2F is not realistic because farmers lack alternatives, says COPA-COPEGA. Farmers “need alternatives to enable them to reach the ambitious targets without destroying their livelihoods and the European rural economy.”

Farm viability is a pressing concern. The Irish Creamery Milk Suppliers’ Association (ICMSA) grappled with F2F’s definition of sustainability: “The most serious problem is the most obvious one: When this strategy mentions ‘sustainability’ does that include the sustainability of the farmers and primary food producers?” ICMSA president Pat McCormack told Agriland.

Czech farmers are afraid of losing their competitive edge. That’s their main concern with outsourcing food production to third countries. “The costs of adhering to safety restrictions are already several times higher than in third countries,” said Vladimír Pícha, spokesperson for the Agricultural Association of the Czech Republic. “The new strategy may further increase this imbalance,” he told local news server iDnes.

Going Down the “Road to Degrowth”

The French farm lobby warns the EU is going down the wrong road. The Commission has learned no lessons about food sovereignty from the Covid-19 crisis, said the French Federation of Farming Workers’ Unions (FNSEA).

The FNSEA argued: “while the environmental impact of F2F is uncertain, what is certain is that it will lead to an increase in food imports for Europeans”.

Apart from objecting to the idea of outsourcing our food production, the FNSEA noted that imported food is often treated with plant protection products that are banned in the EU.

Warning against going down “the road to degrowth”, the FNSEA called on the Commission to “return to the route of sustainable growth”: this would mean a Green Deal that delivers in economic, social and environmental terms. The FNSEA wants to see a “proper” green transition that favours innovative investment – especially in the digital domain – and is supported by the new CAP.

Big Food as “Part of the Solution”

Industry groups meanwhile scrambled to express support for the new strategy, and were careful to keep their criticisms more nuanced.

European Poultry Meat is part of the solution!
Read the response of AVEC on the newly proposed Farm to fork strategy here https://t.co/7PCXEEvLgr#Farm2Fork #EUPoultry #meatthefacts pic.twitter.com/iNxXy1zfUJ

Poultry industry lobby group AVEC insists that European poultry meat is “part of the solution”, and fears that the new demands on producers will jeopardize EU food security.

Like the farmers’ organizations, AVEC claimed the livestock sector is unfairly blamed for climate change. “Livestock production represents less than 6 % of the total EU emissions – other sectors outside agriculture contribute a lot more.”

The coming legislative procedure must be informed by “objective facts and science,” insists AVEC. Like COPA-COPEGA it called for “thorough” impact assessments to ensure that targets for organic farming, pesticides and fertilisers won’t impinge on food security.

The EU aims to transform our food system in line with climate aspirations.
But how much do we really know about livestock and the environment?
Read our FAQ to #MeattheFacts!#EUFarm2Fork https://t.co/3ZzLUT4jqt pic.twitter.com/vyMc5Bx5nf

As Twitter users breathlessly live-tweeted the Commission’s unprecedented targets for sustainability, European Livestock Voice almost seemed to be wondering what all the fuss was about. “The European livestock sector is constantly making improvements to ensure sustainable farming practices,” the lobby group reassured us.

Animal medicine manufacturers meanwhile only want the best for animals, according to Animal Health Europe. Antibiotic sales are down anyway, argues the lobby group. It is keen to further improve the responsible use of antibiotics. However, “reduction targets should never jeopardize animal health”

A lot has been done to reduce the need for veterinary antibiotic use in Europe, & our industry is committed to continuing our efforts to further improve the responsible use of antibiotics.
Reduction targets should never jeopardise #AnimalHealth.#EUFarm2Fork #AnimalHealthMatters pic.twitter.com/CdLDzkK1Xo

If access to plant protection products decreases, so does a farmer's ability to battle #pests and disease. Access to solution options is essential to maintain future harvests #EUFarm2Fork #MoreWithLess pic.twitter.com/mvxjftHPP6

“Targets alone are not the solution,” argued ECPA Director General Géraldine Kutas in an op-ed for Euractiv that echoed this COPA-COPEGA talking point. Instead she called for dialogue and cooperation among all stakeholders. “We all share the same goal – a more sustainable agriculture – for our planet, for our children,” stated the head of the European Crop Protection Association.

Lobby group FoodDrinkEurope was careful to state its support for the Farm to Fork strategy. But it warned against “gastro-nationalism” – in other words, it says Member States must not undermine the Single Market through protectionism.

European food is famous for being safe, nutritious and of high quality. 🍽️ 🇪🇺 🥤

As Europe's largest manufacturer, the EU food and drink industry is committed to playing its part towards more sustainable food systems.

Read our full statement on #EUFarm2Fork below ⬇️

Cereals lobby group Coceral had a similar warning: “There is a a fine line between shorter supply chains and protectionism. We must not fall in the trap of protectionism.”

🚨 On implications of #EUFarm2Fork on supply chains to avoid too few suppliers and #protectionism, @TimmermansEU said if you look globally, this pandemic is creating a different look at the supply chains in US and Asia, not only in the EU. /1

The Farm to Fork strategy was launched to much fanfare on Wednesday by European Commission vice-president Frans Timmermans, Health and Food Safety Commissioner Stella Kyriakides, and Environment Commissioner Virginijus Sinkevičius. Eyebrows were raised however by the curious absence on the podium of Agriculture Commissioner Janusz Wojciechowski. The agri-lobby was quick to tweet the alarm. European farmers have been sidelined, fumed José María Castilla Baró, a lobbyist for ASAJA.

Dear Commissioner, You give the impression that you have sidelined #European #farmers @COPACOGECA @_CEJA_. Why weren't you presenting the strategies of #Biodiversity & #F2F? Don't they take you into account in @EU_Commission or have they sidelined @EUAgri? We are very angry 😤.. pic.twitter.com/QPcfvq74P1

Far from leaving ag out in the cold, Wojciechowski’s department were quick to reassure Twitter users that they were “central in shaping the proposals” and that the “CAP will support farmers in the transition”.

Hi @MikeODwyer3, today the EC was represented by the VP responsible for the Green Deal and the cssrs responsible for the 2 proposals. Cssr Wojciechowski & our service were central in shaping the proposals, and the CAP will support farmers in the transitionhttps://t.co/D4zINzzMZf pic.twitter.com/Xr7aEv4Ozz

The Agriculture Commissioner’s absence didn’t go unnoticed by Pekka Pesonen, Secretary General of COPA-COPEGA. “Where is Commissioner Wojciechowski in this press conference?” tweeted Pesonen. “He is supposed to put large chunks of the package into practice in the CAP?”

Wojciechowski didn’t respond directly. He did however retweet the response of a colleague in DG SANTE, Brian Kilgallen, who stressed the central role of farmers in the Farm to Fork strategy: “ALL Commission services are involved and ALL will be involved in roll-out.”

The Press conference featured the two Commissioner leading on the two strategies being adopted. ALL Commission services are involved and ALL will be involved in roll-out.
Page 1 literally refers to the importance of farmers. And it goes on from there.
Please read it!

Commission Vice-President Timmermans was accused of ignoring young farmers. “Our #FarmtoFork strategy is not against farmers, on the contrary, we need to work with farmers who are the stewards of our environment,” responded Timmermans in a tweet.

In that case it might have been useful, dear commissionner, if the #EUFarm2Fork would have taken into account our concerns, challenges and ambitions.

You cannot first ignore #youngfarmers and afterwards be surprised we're disappointed in your work… https://t.co/rzi1X9cutH

Food Fight – The Farm to Fork Strategy vs CAP

Over 130 European CSOs and NGOs, including ARC2020, have today come together to demand better food and farming policies for Europe. The joint action, in the form of a Common Statement, coincides with a CAP consultation and the Agricultural and Fisheries Council meeting which starts at 10AM Monday 06/03/2017. […]