A wide range of Civil Society representatives came together in the Unite Trade Union’s new building on Abbey Street, just off O’Connell’s Street in the nation’s capital. It was an empowering start to an epic day. That same day, many tens of thousands, perhaps even over 100,000 people, marched in Dublin for the right to water and against water privatization. Ireland is not in any way renowned for the numbers protesting on the streets – quite the opposite. What’s more, radical more citizen-orientated candidates were elected in two constituencies (Murphy; Fitzmaurice) in the only two by-elections where people returned candidates that day: people had voted because two new MEP’s vacated their national seats. Indeed, such seems to be the sea-change in Irish politics that the main opposition for those who won the by-elections in Ireland were other left-wing candidates: the main three political parties received less than 1/3 of the vote in these constituencies. 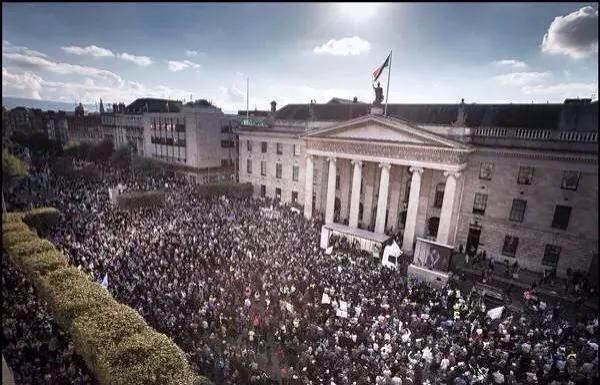 Here are some reasons the agri-food community need to oppose TTIP and fight for something far better as agri-food policy in the EU in general! After all, This TTIP debate also shows us that we need to try harder here in the EU anyway. That’s also part of the point in Fighting TTIP.

Undoing the best bits of the CAP.

Farming in the US:

CAP Pillar 2 measures on encouraging short supply chains, local food, green public procurement, PDO and PGI can all be under threat with TTIP as the can all be construed as barriers to trade.

And now, Phil Hogan is the EU Agriculture commissioner, a commissioner with a strong business-as-usual agenda and track trecord.

“In agriculture, some short-run impacts of an EU-US trade initiative could be a decrease in EU output, in particular for certain meat producing sectors […] certain EU agricultural sectors could [thus] come under pressure to make workers redundant.” EU Commission Impact Assessment Report quoted in Bizarri)

Standards differ on both side of the Atlantic with regard to agri-food standards, safety and animal welfare. Move towards harmonization mean that wherever the standards are lowest, corporations may push for that to be the level – low standards somewhere equals low standards everywhere. pesticides.

There are many familiar examples from the world of agri-food, examples, hormones in meat, chlorinated chicken and stronger peticides such as Paraquat and class one organophosphates.

Here’s just two of these outlined in a little more detail.

“Many US farmers also use ‘ractopamine hydrochloride’to keep pigs lean and boost their growth. But, because the drug is fed to pigs right up until being slaughtered, minute traces of the drug have been found in their meat, leading the EU to introduce another ban as a result of similar health concerns associated with the hormone.

However, in its submission to the US Trade Representative, the National Pork Producers’ Council (NPPC) made it clear that, “US pork producers will not accept any outcome other than the elimination of the EU ban on the use of ractopamine in the production process, which is in clear violation of [international trade rules]”” (Bizarri)

“A problem so serious that it threatens the achievements of modern medicine”. This is how the World Health Organisation describes antimicrobial resistance in its publication Antimicrobial Resistance: global report on surveillance 2014.

We’ve covered this in some detail on Arc2020.eu already:

“microorganisms resistant to antimicrobials that emerge in animals may spread to human populations.”

“A post-antibiotic era – in which common infections and minor injuries can kill – far from being an apocalyptic fantasy, is instead a very real possibility for the 21st Century.”

EU has more of a handle on it, bringing in a ban on antibiotics as growth promoters since 1997. However countries like the Netherlands which went beyond the usual voluntary regulations (which essentially meant a shift from growth to therapeutic use) and introduced fines for non-compliance have the best handle on it.

”If TTIP contains broadly worded investment protection clauses, ISDR could hamper the EU and Member States in efforts to establish regulations seeking to protect their citizens or the environment.” (Report Commissioned by European Parliament’s Environment Committee)

ISDR’s give companies the right to sue States for lost potential earnings. These potential losses occur if democratically elected governments bring in new or tighter regulations in areas like environmental protections. To be very clear, what this means is that decisions citizens make through the democratic process may be successfully challenged by Corporations, if these decisions threaten profits for Corporations.

Four examples from the report are outlined here, involved hundreds of million of Euos/dollars paid to corporations where health or environmental regulations improved.

“Self-regulation by companies has not had any significant effect on altering food marketing strategies.”

“Bilateral investment treaties may subvert existing internationally agreed upon guidelines and lower tariff and non-tariff barriers to trade, allowing freer import and export of unhealthy food products. For instance, free trade agreements have been directly linked to an increased consumption of soft drinks.”

The case of EDs and pesticides: From Arc2020’s Robert Pederson’s feature on Euractiv.com

EDs, found in amongst other things, pesticide combinations, are known or suspected to cause a number of health problems such as learning disabilities, attention deficit disorders, cancer and are increasingly linked to obesity and metabolic disorders such as type 2 diabetes.

The Commission has intentionally delayed legislation on EDs. “The endocrine strategy was blocked because of lobbying by the cosmetics industry”, EurActiv reported.

The European Commission, in their revised strategy on EDs, is currently weighing whether to propose changing EU legislation governing the use of pesticides. (away from precautionary)

This is a key demand by the ‘crop protection’ (agro-chemical/pesticide) industries on both sides of the Atlantic in US-EU trade talks.

In May 2013, CropLife America, agro-chemical lobbyists, wrote to the US Trade Representative, citing the neonicotinoid ban as an example of the “abuse of the precautionary principle by the EU” and described the “categorisation of chemicals as endocrine disruptors currently taking place” as “highly problematic”. They stated that this “runs counter to the science-based risk assessment approach used by the US Environmental Protection Agency”.

In June 2014, the Commission published a roadmap, which contained an option to shift from the current EU approach of banning the use of all EDs in pesticides, towards a model that could allow them to be used as long as certain steps are taken to mitigate the risk.

Recently, it was announced that US and EU will seek a ‘Harmonised Approach’ on EDs in a pilot program. The initiative on EDs is one of three pilot programs on chemicals launched by the US and EU in parallel to TTIP.

Based on reports produced by corporate-funded think tanks for the EU Commission, the European Commission has claimed that TTIP could create two million jobs and boost EU-US trade by more than US$120 billion within five years. On the basis of industry-funded research, a 1% increase in GDP growth has been promised by negotiators.

The European Commission’s own impact assessment of TTIP concluded that a growth rate in the region of 0.1% would constitute a more realistic expectation. This would equal a growth rate of just 0.01% of GDP over a ten-year period, which economists have already dismissed as ‘trivial’.”

Yet, the socio-economic and environmental risks associated with such trivial economic benefits could be catastrophic. Increased competition…could trigger economic restructuring that may even lead to job losses

The added competition between European and US sectors could further increase the gap between the core and the periphery in Europe: ag and peripheral countries to loose out.

Business looses out by $5billion per year because of stronger regulations in agri-food, regulations which could be lost with TTIP (Protective legislation and tax policies; security related measures; difference in trademark legislation; labelling requirements).

Prof. Clive George, a senior economist from the University of Manchester who until recently conducted many of the European Commission’s impact assessments of trade negotiations.

Commission jobs and growth TTIP forecast is based on “highly Speculative” modelling and “optimistic” general growth figures for the EU. It will result in “trivial” rates of growth in reality “and the EU Commission knows this”.

Lessons from the recent past: NAFTA increased trade between US Canada and Mexico, but resulted in job losses in all three places: NAFTA resulted in a net loss of almost a million jobs (879,280 jobs) – and not in the creation of the 20 million jobs originally promised. And severe downward pressure on wages, conditions etc (and far worse in Mexico)

Oh yes and the jobs? Sickening how? Well, do you fancy chlorinating chickens or using paraquat as a former farmer-now-farm labourer? How will your health be in this context? (e.g. of Pesticide drift to get a taste fo the life of a farm labourer with stronger pesticides and weaker rules). 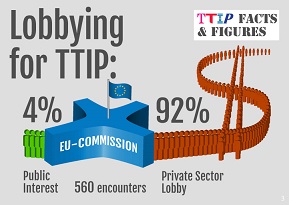 So to start to conclude, who is for and who is against TTIP as it is currently being negotiated? And what are their interests- who do they represent in essence? Let’s have a look.

“When preparing the TTIP negotiations in 2012 and early 2013, the European Commission’s trade department (DG Trade) was lobbied by 298 ‘stakeholders’ – 269 of them from the private sector.

Of the 560 lobby encounters that the Commission had – in consultations, stakeholder debates and behind closed doors meetings – 520 (92%) were with business lobbyists.

Only 26 (4%) of the encounters were with public interest groups (the remaining 4% were with other actors such as individuals, academic institutions and public administrations).

This means that, for every encounter with a trade union or consumer group, there were 20 with companies and industry federations.”

TTIP threatens citizens through citizen or nature-friendly rules (already) getting weaker on hormones, Endocrine Disruptors, pesticides, and other inputs and processes; corporations having the right to sue countries for trying to make life better; farming (and increasingly, farm labourers not family farmers) being subjected to stronger, more damaging industrialised inputs; a worsening of diets; a likely decline in jobs, ag job and peripheral jobs.

More from Oliver Moore on Arc2020

What might TTIP mean for organic farming and food?

Animal confinement and antibiotics are just two areas where a race to the bottom might work against organic standards on both sides of the Atlantic. […]