Seed Community Systems are emerging as a form of collective management of agricultural biodiversity. Through seed exchanges and know-how, community seed centers provide the organisational support to develop peasant seeds within a regulatory framework that tends to ban them. 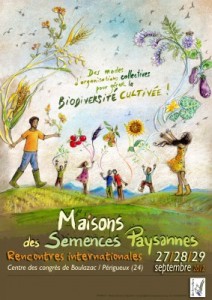 Late September saw The International Seminar on Seed Community Systems held in Perigueux, France. It was an opportunity for peasants, scientists and agricultural activists to share experiences and know-how on seed conservation, replication and distribution. Delegations from France, Austria, Romania, Hungary, Senegal, India and other countries presented their work; including the practical and legislative risks which they face. The seminar included practical workshops held on farms that cultivate and breed traditional seeds of vegetables and cereals. This included a visit to Biau Germe where participants could witness the functioning of a successful farmers’ cooperative saving and distributing hundreds of varieties of vegetables and cereals.

Traditional seeds, peasant seeds or local seeds are the result of hundreds of years of plant breeding carried out by peasants. They are cultivated in their areas of origin and through years of breeding  become uniquely adapted to the local conditions; becoming resistant to both biotic and abiotic stresses. This is how they offer a stable and safe production without the use of chemicals. These seeds are more than a product; they represent the cultural identity of peasants and the very soul of agricultural societies.  Traditional seeds, formed under the influence of natural selection are a precious heritage; a wealth that Seed Community Systems aim to conserve.

A Romanian delegation consisting of two peasants and a traditional baker from the Eco Ruralis peasants’ network were present in Perigueux to collect ideas for developing a Seed Community System.

“My harvest is based on seeds I received from my parents. They are reliable, resistant against pests and also have a high yield. In Romania, our authorities do not recognize their value; instead we are told that patented hybrids and GMOs are the way forward. It is so encouraging to see the common effort of French farmers to save and distribute their own seeds. We, small farmers from all over the world, are all producing nutritious and clean food for our society. For this we need recognition, not constraints,” said Levente Hajdu, a vegetable producer.

“This bread“, stated Iulian Dutu, an artisanal baker from Transylvania,”was made with a 400 year old variety of wheat. It gave quality flour to several generations without any chemicals or genetic manipulation. We must ensure that farmers retain the right to breed their seeds.” He was referring to EU criteria currently being developed for an official catalogue of permissible seeds.

The seminar ended with a seed swap in the spirit of conserving biodiversity and its guardians;  the small scale farmers from around the world.

Sara and the seeds of hope: a personal story

International seed exchange: the role of tradition, family and generations to come […]

Solutions needed for Romania’s all too frequent droughts

Smallholders feel the impact of declining investment in irrgation […]

Madeline McKeever has been farming in west Cork, on the edge of the Atlantic, since 1999. First in dairy and cheese making, then beef, and now mostly selling organic vegetable seeds. Madeline has seen a lot – like the return of mushrooms, white clover, and dozens of plants in her unploughed sward. […]