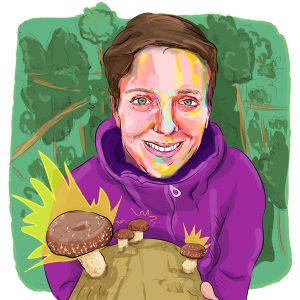 We’re back at the foot of the Italian Alps, where Chiara Garini is growing like the shiitake mushrooms on her forest farm. Given our precarious, hyperconnected and crisis-stricken planet, Chiara is sticking with the realism of making and maintaining –food and employment, forest and qualify of life– over the idealism of saving the world. The farm is growing too, and the long-awaited renovation of an old building is helping the now-expanded team to diversify activities.

I just came home from a beautiful walk on the short bike path around the corner. Listening to some great Italian dance music I found myself admiring the majestic beauty of the colorful mountains embracing the valley. Looking closer at the green scales rising up the mountainside, our shiitake woodlogs are reawakening now that we have started the soaking cycles of the new production season.

My own livelihood relies on this mushroom – how bizarre is that? Coming home with a basket full of freshly harvested shiitakes I think about how precarious this might be but I trust it at the same time!

I am reading The Mushroom at the End of the World: On the Possibility of Life in Capitalist Ruins by Anna Lowenhaupt Tsing and my mind goes to the South-East Asians who harvest the Japanese matsutake mushroom in the Oregon forests.

Shiitake forest farming is probably not as precarious as wild mushroom harvesting but I find some similarities with the interesting stories narrated by Tsing. Somehow the circumstances were right for us to introduce in the central European Alpine environment an Asian mushroom thanks to farming techniques elaborated by Americans.

Such a combination, as bizarre as it might sound, is also very promising for the precarious, hyperconnected and often nonsensical world we live in.

Only last spring I wrote that expanding the shiitakes was going against the concepts of biodiversity and diversification, thus I could not do it.

Because of my pretty strict idealistic approach against monocultures, I did not realize that biodiversity is part of the forest farming production system in itself, thus it does not have to be constrained but there is space for expansion. Of course there might be some negative environmental impacts if the whole provincial forest area was to be farmed with shiitakes; I do not have to limit myself to 1000 m2 however.

In these times of global crisis I am proud to take responsibility for introducing and spreading a farming system which produces nutritious food, maintains forests, doesn’t require any chemical inputs and creates jobs.

The willingness to explore what’s behind the ‘city-centric’ idealisation of farming and nature has been crucial since the beginning of our enterprise. However a good dose of idealism played a major role in setting up my initial motivations and it might also have made me neglect some realistic issues.

One of them is quality of life.

In the last five years we have been changing hats daily from workers to entrepreneurs to engineers to accountants to sellers and so on. Living this multifunctionality first-hand surely has been useful and we have been learning a lot.

The time was ripe though to start reasoning about delegating in order to make the whole farm enterprise more sustainable economically and on a personal level as well. We started asking ourselves not only what needs to be done but also what we are better at doing, where we obtain the better results and satisfaction.

First thing, in order to thrive, we started investing in human resources for the season. The good news is that we have already made this progress as we have now hired a person that will help us with the practical tasks in the forest, field and lab.

We expect this huge improvement will free up some time and energy to dedicate to the roles which are actually more suited to us as founders and ideators, meaning managing the strategic and tactical levels. It is motivating and exciting to foresee more forest managed and farmed, more mushrooms to eat for more, more work for more people and more money as well.

The infatuation with the self-sufficiency utopia belongs more and more to an idealistic city-centric past. I do not deny it, but I see how some excessive approaches about life goals and world views have been flowing through my mind in recent years, and how limiting they might actually be.

I realized I had been dragged into a kind of narrative where I have to get ready for survival mode – as if the apocalypse was just around the corner. Certainly this narrative is not that unrealistic, and unfortunately it isgetting more and more actual now that we horribly often hear about nuclear weapons in the news.

Anyway, this kind of narrative led me to some excessive self-imposed burden. As if I could feel the whole idea of saving the world weighing on my back. I now understand how simplistic that idea is. As banal as it might sound: how can you think of saving the world if you are not saving yourself?

The reconstruction work of the ruin into the new farm building is now completed and all the bureaucratic requirements for the Rural Development Plan funding as well. Even if it took us one year longer than expected, we are now starting to see what great assets are the new lab, storage and selling point.

Many changes in our work are going to take place in the summer months ahead. Life at Guà farm is experiencing first-hand the constant evolution we are immersed in.

The unstoppable process of change that occurs in things, environments, activities, organisms and myself as well. I feel I am on the crest of the wave and I like it as it is more and more without any pre-packaged set of solutions to follow, a matter of keep on shaping and being my own better version of an eternal game.

Letter From The Farm | The Slower Path To Paradigm Change

Letter From The Farm | Bridging Worlds Old and New

Letter From The Farm | Calving, Lambing – and Timing

Chiara Garini recently started her own farm enterprise with her partner in the Province of Trento (Italy). She has previously working in care farming on the Conca d’ Oro farm, where she managed production of organic fruit and vegetables preserves. She has Double Masters Degree in Organic Agriculture – Agroecology. Wageningen University and Research (the Netherlands) and ISARA-Lyon (France). Chiara received a Bachelor’s Degree in Gastronomic Sciences Università degli Studi di Parma (Italy).

Stéphane loves numbers, and it’s a formula for the success of the six-hectare horticulture farm, GAEC Le Jardin des Pierres Bleues, that he runs together with three associates and one employee in Vay, north-west France. By his calculation, everyone gets to earn a dignified living, true to their principles and to nature. Free of debt, and free of CAP subsidies… In conversation with Valérie Geslin. […]

We’re back with Czech livestock farmer Josef, who says we need to trust farmers more. Farmers will make responsible decisions unless the system forces them to act irresponsibly. And he explains why the future of farming is in forgotten places. […]