Isabella Lang has been working on her friends’ farm in the Austrian Alps since the spring. After four years in the Brussels bubble, she was keen to get her hands back in the soil. It’s been several months of hard work, long days, amazing food, and a healthy pace of life. In this first letter Isabella introduces us to the farm. Meet the new peasants. 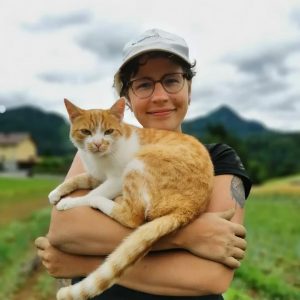 Welcome to Kleinortbauer. Thomas and Olga Huemer’s agroecological farm is located around 600 m above sea level, on the edge of the Upper Austrian Kalkalpen (Limestone Alps) National Park.

On 20 hectares they cultivate a vast number of herbs (45 species), vegetables (20), staple crops (3), cereals (5) and keep a number of different animals (5), most of them rare breeds which are threatened by extinction.

It almost sounds like a rural utopia but the way to get there was complicated and still challenges the young family from time to time. Over the next 12 months I will zoom into the different areas of production more in detail but, for this first letter, let me introduce you to the farm.

Let’s start from the roots of this exciting project.

The loss of farmland as well as land concentration and speculation are crucial problems in Austria, but are hardly found on the political agenda. Starting farming from scratch, if you don’t inherit land, is always a challenge – moneywise, training wise but also regarding the social structures of our villages and rural communities.

In Austria, where soil sealing is happening at the fastest rate in Europe and agricultural land getting more and more expensive, you need lots of money, time, connections and luck to hopefully be able to enter farming.

Other people from the Letters from the farm series report similar difficulties in other European countries (e.g. here).

For Thomas and Olga, the search for farmland lasted several years. And in some way this search is never completely over, once they had the farm questions of leasing more land came up in order to ideally diversify the farm.

Me and Thomas became friends when we started a student project with the aim of facilitating land succession and access to land for beginning farmers through building up an online platform where farmers who need a successor and potential new entrants can get in touch. Although the platform became a success and the Austrian public very positively responded to the general idea of the extra-familiar farm succession platform, we saw the underlying problem from the beginning and of course couldn’t solve it: private property vs land as commons, patriarchal succession traditions and discrimination in general.

What is the real game changer for society if we help a few individuals to start farming but do not question the structure of private land ownership as a whole? Every single farm that can be preserved is extremely valuable.

In order to solve the issue of farmland concentration, speculation and access to farmland, machinery etc. a fundamental change of how we manage private land property and soil as a habitat rather than a commodity are crucial to address.

Between desire and reality: Rural utopia

Diversity is a fundamental pillar of Thomas and Olga’s farm. The farm philosophy is to preserve a diverse plant and animal life. They mainly grow staple crops such as potatoes, onions, garlic, but also tomatoes, cucumbers, cabbages, herbs and edible flowers. In addition to rye and wheat, oilseeds such flax are also grown in the fields. Here, special emphasis is placed on local varieties and the preservation of heirloom seeds.

Accompanying agroecological measures maintain the balance in the fields, meadows and gardens: there are for example annual and perennial flower strips to create a habitat for beneficial insects – which are particularly needed in vegetable production.

In addition to arable land, they also farm on grassland. The partly steep pastures are grazed by around 120 Bovec sheep [dt. Krainer Steinschaf], an extensive small-framed sheep breed originally from Slovenia. Additionally, they keep about 60 laying hens and a handful of turkeys. The animals have a number of beneficial impacts on the farm biodiversity and the meat and eggs sold are a good part of the income.

Thomas and Olga are also reproducing Old German Herding Dogs, a landrace that is threatened by extinction and traditionally used as working sheepdogs. As the discussion around wolf re-population in the Alps is very controversial at the moment, this type of shepherd system could be part of the solution to achieve a good co-existence between agriculture and nature protection.

Most of the primary products are refined to achieve a higher added value – so there is a colourful range of products from herbal tea mixtures to pasta to garlic paste, sheep sausages or lambskin. All products are marketed directly, via a regional cooperative supermarket, restaurants or by home delivery. Recently, a small self-service hut was installed for people to shop 24/7.

How to deconstruct a village

Decentralised, regional and local markets are highly important for Thomas and Olga to sell their products. The agriculture system is a relatively closed cycle due to the variety of different activities on the farm. Any food Thomas and Olga don’t produce at home is bought mainly in a cooperative supermarket in the neighbouring village.

The concrete experiences of the people and their contradictory everyday understanding also helped Thomas and Olga to establish new models of farming and relations between farmers and consumers.

During peak work periods like the potato harvest or hay making they normally easily find neighbours and friends who help them. Additionally, they accommodate wwoofers on their farm almost all year round.

Because people like the way Thomas and Olga farm. There is no biodiversity paradise like their farm in the region; nobody else gives so much attention to closed nutrient cycles and lives with their animals in such a respectful dignified way.

In fact, sometimes the most difficult part is to have a somewhat healthy work-life balance and a stable income.

Many peasants and family farmers are in fact working poor. The average income is only around 50% compared to the average income of other sectors. The economic situation of women, seasonal workers and migrants is often considerably worse.

So, in order to deconstruct a village, one could start to build up community. To be continued…

Isabella Lang is agronomist with an education focused on agroecology and organic farming. She spent four years in the heart of the so-called Euro-bubble in Brussels to work on agriculture policy for an NGO and later in the European parliament. But she always missed home and the “real” work on the ground. Therefore, she went back to her home country Austria this spring to work with her good friends Thomas and Olga on their agroecological farm. The work was hard, the days long, the food amazing and finally she managed to return to a fairly good and healthy pace of life again.

150+ people from 20+ countries are attending Urgenci’s third European CSA gathering in Ostrava this weekend. ARC2020’s Oliver Moore is one of them. Here’s his account of the story so far. […]

Letter From The Farm | Welcome to Ciasnocha Family Farm

Welcome to Ciasnocha Family Farm – a 730 ha regenerative grassland farm in the Vistula delta of northern Poland. In his first Letter From The Farm, Mateusz Ciasnocha walks us through what’s involved throughout the year on his farm. But first, Mateusz gives us a whistlestop tour of the farm’s history over three generations, from Communism to CAP, and the transition to regenerative agriculture. […]