All this week, we run a dedicated land grabbing series, in partnership with Eco Ruralis. In part one, with Attila Szocs, Land Rights Campaign Coordinator at Eco Ruralis we introduce their comprehensive land grabbing report.

The debate on land has escalated in Europe. About time, campaigners would say! For several years, EU and national authorities were looking towards the Global South, witnessing the massive land grabs done in African, Asian and South American countries, but what about our own back yard?

It seems that it’s harder to formally acknowledge that EU support programs, like the CAP or land consolidation and concentration plans implemented by new member states like Romania, generate the same phenomenon and negative consequences: YES, land grabbing happens also in the European Union and we cannot turn a blind eye.

Livelihoods of family farmers, fair and balanced food systems and the very sovereignty of millions of peasant and organic producers depend on the way we all, and most importantly our decision makers, react. 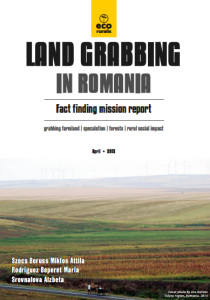 Eco Ruralis has recently released a new report on “Land Grabbing in Romania”. Why? Because in my country only 12.000 farms over 100 hectares (0.3% of Romanian holdings) represent 34% of the Utilized Agricultural Area (UAA). The “top 100” of these holdings control more than 500.000 hectares of the country’s agricultural land. Many of them are subsidiaries of multinational companies and international investment funds. Across the whole country, natural resources have become the object of speculation and massive investments where the land owned by millions of Romanian peasants are being grabbed and transformed, with far reaching effects.

Statistics of the Romanian National Institute of Statistics (INS) show that between 2002-2010, 150.000 small farms disappeared while large farming increased by 3%.

Drivers include large scale monocultural farming, forestry, mining, energy, tourism, and ultimately speculation – and the process is weakening rural economies and hampering the development of a dynamic rural sector.

On the top of that the Romanian Government is pushing on with the development of agro-industry and making substantial efforts to attract foreign investments. The Government’s Program for the period 2013-2016 clearly states it wishes to move towards very large scale, export-oriented agriculture. In my country, as traditional and organic farmers are being marginalised, land is becoming merely a commodity on which companies can speculate. Land has become the new gold.

Romania is not the only country facing this issue. As the recent study on the “Extent of Farmland Grabbing in the EU” created by the Transnational Institute on the request of the European Parliament’s Committee on Agriculture and Rural Development reveals much to be concerned about.

The geographical distribution of farmland grabbing in the EU is uneven and is particularly concentrated in eastern European member states. Here, the lack of transparency around large-scale land deals in the EU implies that farmland grabbing operates in part through ‘extra-economic’ forces and it involves a huge diversity of actors, including a new asset class made up of large banking groups, pension and insurance funds, who are controlling an ever-increasing share of European farmland. The study also highlights that farmland grabbing in the EU interacts with longer-term processes of land concentration which is a matter of high policy and social concern.

The findings of the “Land grabbing in Romania” are similar. Data from official registries show the strong presence of banking institutions and investment funds like Rabobank, Generali or Spearhead International. The range of investors is “exotic”…from Austrian Counts to Romanian oligarchs and Danish and Italian agribusiness companies. The study argues that investors are mainly preoccupied with how to increase efficiency and how to develop the product. Labor conditions or local economic development are not of a high importance for transnational companies. They grow vertically, usually controlling the full process of production all the way to export. Thus, small farmers are forced to reduce the price of their products to compete with highly profitable and subsidised businesses. As the possibilities in the countryside retract, many decide to sell out and leave their livelihoods behind.

The report highlights some specific case studies through four facts-sheets on land grabbing and two fact-sheets on forest grabbing, highlighting the investment approaches of industrial rice producing Italian companies, the large-scale domination of Bardeau Group and the logging activities of one Austrian and one Finnish company.

Reading these reports, we realize the “velvet” side of land grabbing. Masked by sound bites like “Economic Dimension of Farms”, “land consolidation” and “land concentration”, European Subsidies, National Governmental Plans and Corporate interests meet in a poisonous whirlpool. Let’s not imagine armed private militia dispossessing peasants from their lands here, although I have visited Romanian mega farms which where guarded with Kalashnikov’s.

No, the weapons of land grabbing in Eastern Europe differ: money, lack of transparency and institutional corruption. Nonetheless, they hurt underprivileged rural societies in the same way.

On March 31st, all 19 Member States that submitted their CAP Strategic Plans (CSPs) by the 1st January deadline received their awaited Observation Letters (OLs). In this article we discuss the implications of the Commission backtracking on a transparent process and explore the content of OLs that have been partially released. […]