Globalisation is not only a matter of clothing and mobile phones. Long-distance worldwide shipping of food commodities has also increased tremendously over the last few decades. Lassaletta et al.(2014) estimate that one-third of all proteins (a proxy for the nutritive potential of foodstuffs) produced globally are redistributed through international trade. Thus a recent study in France shows that the total volume of long distance commercial exchanges of food commodities, mostly originating from far away, account for over twice the national agricultural production (Le Noé et al., submitted).

However, the positive value of a globalised food supply is being actively questioned. In industrialised countries, a citizens’ movement has arisen, sometimes supported by local public authorities, seeking to promote a local food supply. This movement aims to reclaim control of nutrition, re-create social links often destroyed by the extent of mass distribution, and develop the local economy.

Developing countries are also attempting to strengthen their local food supply and recover part of their food sovereignty lost by decades of open market policies. At both the community and national scales, the objective of localising the food supply has become an important social and political focus. 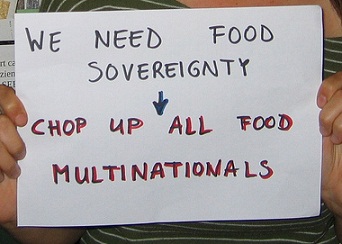 All ARC2020 articles on food sovereignty

However, shipping cereals, soybeans or other foodstuffs in containers across the oceans is very inexpensive. Many studies have shown that this does not in itself have a large environmental imprint compared to the impact of agricultural practices themselves. Converting chemical agriculture to organic practices, which eliminates pesticide pollution and gives rise to lower nitrogen losses to the environment, would have much greater impact on the environment than reducing “food miles” (Weber and Matthews, 2008).

Economists have therefore proposed the comparative benefits of producing each type of food on the most suitable land and relying on international trade to redistribute them. These are among the sceptics claiming that targeting food self-sufficiency and sovereignty compromises the environmental optimum that an open global market economy might offer.

For example, Desrochers and Shimizu (in Yes We Have No Bananas 2008) claimed that feeding a rapidly growing world population in a sustainable manner requires long-distance trade to ensure that food is produced most efficiently in the most suitable locations. Ballingal and Winchester (2008) go further by stating that local preference in food choices in developed countries would lead to “starving the poor” by depriving Southern countries of important commercial incomes. The important question we will address in this article, therefore, is whether localising the food supply is beneficial or detrimental to food security and to the environment.

Our food system model
Based on FAO data, we established a model of the agro-food system of 12 regions of the world in terms of protein fluxes across arable land, grassland, livestock and human nutrition. Besides showing the substantial geographical disparities of the current world food system, the model allows one to explore the possibilities of meeting the food demand as estimated for 2050, based on demographic projections (9.25 billion inhabitant globally). Included in the model are nitrogen (N) losses to the environment generated at each stage of the chain (Billen et al., 2014, 2015). It is known that the cascade of N initiated by agricultural losses has huge effects on groundwater, freshwater and marine ecosystems, air pollution and terrestrial biodiversity, even far away from the agricultural fields (Sutton et al., 2011).

The idea is to look at our ability to feed the global population with or without inter-regional trade exchanges by varying the human diet and the intensity of N fertiliser use and of animal husbandry. Keeping unchanged the current cropland areas and the basic performance of cropping and livestock systems in each region, we explored the capacity to feed the world and the relative environmental impact according to a very large number of combinations of three critical drivers of the food system.

The first driver we acted on is human diet, more specifically the total amount of protein consumed, and the share of animal protein in this total. Both vary greatly at present, from 3.7 kg proteinN/capita/yr (the minimum subsistence figure) with 26% animal protein in Africa, to 6.5 kgN/capita/yr with 65% animal protein in Europe and North America. Between these two extremes, hunger in the former, excess food intake in the latter, there is room for adjustment.

The second driver is regional livestock production. When grazing semi-natural grassland, livestock provide an efficient way of converting inedible resources into high-value food. We did not change agro-pastoralism activities in our scenarios. However, to meet the meat and milk requirements of the population beyond what is offered by grazing on semi-natural grassland, a region can either import these animal products or develop mixed or landless livestock farming. This requires either importing or cultivating feed. Such a strategy may also compete with human nutrition.

Finally, the third driver is the degree of intensification of crop cultivation, more specifically, the rate of fertilisation of cropland. In each world region, our model can assess the response of crop yield to total N input to soil as manure, synthetic fertilisers, symbiotic N fixation by legume crops and atmospheric deposition. N fertilisation is the major driver of crop production. However, because of the asymptotic shape of the yield-vs-fertiliser relationship, which expresses the law of diminishing returns, the higher the rate of N input to the soil is, the greater the N losses. These losses pollute water resources and the atmosphere (Lassaletta et al., 2014). We used the ‘N surplus to cropland’ variable, i.e. the amount of total N applied to cropland soils over the amount exported with the harvest, as a proxy for environmental pollution.

The key results
Varying these three factors independently in each of the 12 world regions, we constructed several billion scenarios. Among these only a much smaller number met the needs of the world population in 2050. Analysing the results showed that feeding the projected 2050 world population would generally involve higher levels of inter-regional trade and environmental N contamination than the current levels. However, the scenarios with less recourse to inter-regional trade produce less N loss to the environment (see Fig. 1).

Another finding is that if an equitable human diet (in terms of protein consumption) is to be established globally (the same in all regions of the world), the fraction of animal protein should not exceed 40% of total dietary ingestion. For Europe and North America, this means shifting the current diet, rich in meat and milk, towards something closer to the Mediterranean diet, in which plant proteins, pulses, vegetables and fruits occupy a larger share.

With the same approach, we also showed that slightly improving the agronomical performance in the most deficient regions (namely Maghreb, the Middle East, Sub-Saharan Africa, and India) up to the point where they could be self-sufficient at the minimal diet (i.e. 4 kgN/capita/yr according to WHO recommendations), is particularly important. It would make it possible not only to (i) feed the world with much less international trade (hence more food sovereignty), but also (ii) reduce N environmental contamination most efficiently (Fig. 1).

These results indicate that, at the global scale, and contrary to what is often claimed, the objective of food sovereignty is consistent with that of minimising environmental agricultural pollution. This we have shown in local case studies as well. In France and Spain, re-localising the food supply and reconnecting agriculture with livestock breeding and food consumption can radically improve water quality (Billen et al., 2012, Lassaletta et al., 2013).

Taking the projected increase in the global population as an argument to justify a never-ending quest for increasing agricultural yields in developed countries where the population has stabilised is therefore totally incorrect. In contrast, a scenario of extensification of European agriculture has been proposed by van Grinsven et al. (2015) and shown to be beneficial both in terms of environmental costs and food supply on the world market.

Thus, promoting self-sufficiency and food sovereignty does not compromise global food security and environmental quality. On the contrary, it is the best option for feeding humans and safeguarding the planet.  We can think globally, but eat locally!

Figure 1 (legend): A vast range of scenarios for feeding the world in 2050 (assuming no major change in the area of arable land) are represented in this diagram according to the amount of international trade required (horizontal axis) and the resulting environmental N contamination induced by N losses from cropland (vertical axis).

1. The current situation (as of 2009) is characterised by an intensity of international trade of about 25 million tons protein N per year and by N losses from cropland to the environment as high as 100 million tons per year.

2. With the projected world population and the diet calculated in each region of the world by economists, feeding the world would require doubling the intensity of international trade and nearly tripling agricultural pollution losses.
3. With an equitable diet (the same for all world regions) set at the WHO health recommendation, many possibilities exist to meet the requirements of the world population. All scenarios require more international trade and would produce more pollution than the current situation, but those with the lowest rate of international trade also produce the least N contamination.
4. If an effort is made to improve the agronomic performance of the most deficient countries (Maghreb, Sub-Saharan Africa and India) up to the capacity of self-sufficiency at the lowest possible diet, then it is possible to feed the world at the optimum equitable diet with much lower trade and N pollution.
5. The scenario of full regional self-sufficiency (no inter-regional trade) would produce significantly lower N contamination than currently observed.

This article originally appeared at Independent Science News  in April 2015 and is licensed under a Creative Commons Attribution-NonCommercial-NoDerivs 3.0 License

Agroforestry is positively highlighted in many adopted texts and directives from Brussels and is also mentioned in the framework of the CAP and proposed as a possible measure of the Eco-Schemes. Despite its undisputed benefits, it is still largely unknown. What’s more surprising is that the current process of CAP strategic plans seems to virtually overlook it – so is it all spin, no substance?  Andrea Beste has more. […]

Raw campaigner Jonty’s own account of the camp, workshops and demonstration in Wietze […]