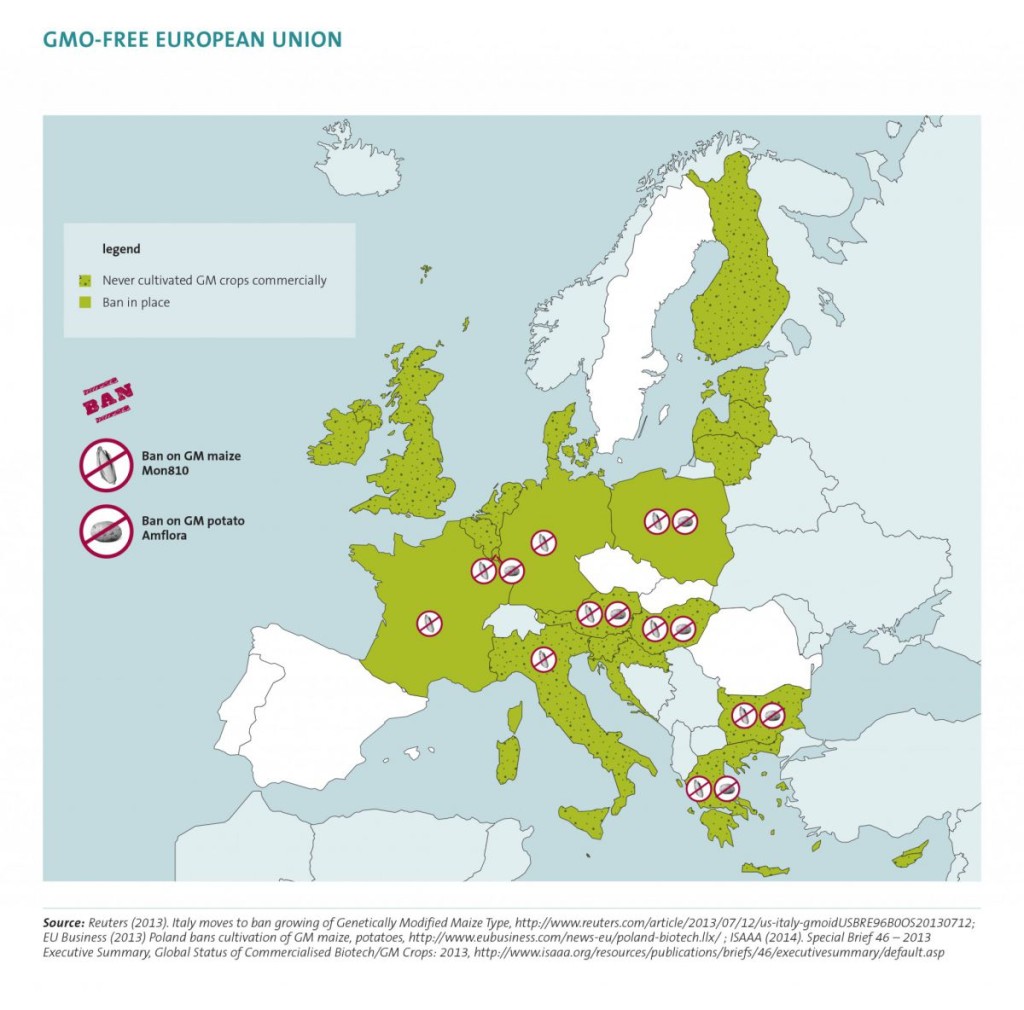 The long decision making process for the genetically modified (GM) maize 1507, owned by Pioneer Hi-Breed, seems to get close to an end. As usual, it’s up to the European Commission to take the final decision.

Over almost 14 years, given the pressure made by civil society, based on legal and scientific grounds, EU officials took the easy way out by postponing the decision. The developments in the regulatory procedure, followed by mixed delegation of responsibility, lobbying by the GMO industry, lack of consensus between decision makers and procedural failures in application of the EU GMO law, have also contributed to the longest GMO authorization process in the world.

The European Commission hesitated in three successive terms to authorize this GM maize. Its been a fascinating, long and winding road.

The 1507 maize is genetically modified to tolerate herbicide based on glufosinate and to produce it’s own pesticide.

Function: This gene codes for the enzyme Phosphinothricin – Acetyltransferase (PAT) and leads to increased tolerance to glufosinate-containing herbicides. This gene is used as a marker gene.

The process was initiated back in 2001, when Pioneer Hi-Breed submitted an application for authorization for commercial cultivation of a genetically modified organism called ‘insect-resistant genetically modified maize 1507’ (‘maize 1507’). Due to the change in the GMO legislation, Pioneer’s 1507 application was modified on 17 December 2002, in order to meet the requirements of Directive 2001/18.

The European Commission – first steps on the draft decision

At the request of the Commission, on 19 January 2005, the European Food Safety Authority (EFSA) – the competent scientific committee, delivered it’s first opinion.

Following a technical meeting between the Commission, the member states, EFSA and Pioneer (the applicant), on 24 July 2006, the Commission asked EFSA to deliver a further scientific opinion on maize 1507. EFSA’s second opinion was published on 17 November 2006 in the form of an annex to the first opinion. Following this, the Commission was working on finalizing a draft decision for submission to the Member States.

On 2 May 2007, Pioneer Hi-Breed brought an action before the General Court (Case T‑139/07), against the Commission, accusing the Commission for blocking the procedure for adopting the decision. On 25th of February 2009, the Commission submitted the proposal for a decision to the Regulatory Committee, which had no qualified majority either in favor of or against the proposal. Even though the Regulatory Committee failed to deliver an opinion, this vote closed the court action initiated by Pioneer. The General Court did not order the Commission to propose or adopt a decision on the GM crop at stake.

On 14 June 2010, the Commission requested a new opinion from EFSA, inviting it to examine the scientific content of the opinion of an institute carrying out independent impact assessments in the field of biotechnology. In 2010, that institute brought to the Commission’s attention new scientific concerns regarding the application for authorization for the placing on the market of maize 1507. EFSA delivered two successive opinions on 19 October 2011 and 24 February 2012 updating the environmental risk assessment and the risk management recommendations regarding the maize 1507 for cultivation. Following this, on 18 June 2012, the Commission requested Pioneer to modify its monitoring plan and to propose risk mitigation measures for Lepidoptera non-target insects in line with EFSA’s recommendations.

Following the requests of the Commission, EFSA published new up-dates on 25 October 2012 and on 6 November 2012. By letters, Pioneer was informed by these recommendations and declared that it will work on improving it’s application.

In 2010, Pioneer launched a second action (case T-164/10) against the Commission, claiming a failure to act for not having, following that absence of opinion by the Regulatory Committee, send to the Council of the EU a proposal for an authorization decision. The Commission argued that EFSA’s new opinion of October 2011 entailed modifications to the applicant’s notification, which led to substantial modifications of the proposal for a decision.

Hurry up and wait…

After the Commission delivered the draft decision (on 6 November, 2013, mentioned above), the process went on a fast track.

On 16th of February 2014, the European Parliament voted on a resolution against the authorization of the GM maize 1507 (385 for the resolution, 201 against the resolution, 30 abstained), also asking the Commission “not to propose to authorize any new GMO variety and not to renew old ones until the risk assessment methods have been significantly improved”.

During the session from 11th of February 2014, the Council of the EU couldn’t reach a qualified decision against or in favor of the authorization of the 1507 GM maize, despite the overwhelming majority of votes against it (19 member states voted against whilst only 5 voted in favor).

LEGAL & SCIENTIFIC ARGUMENTS – against the authorization of 1507 GM maize

EFSA issued several opinions regarding the safety and the risk assessment of the 1507. Because of the fact that this GM maize has 2 traits (production of pesticide and tolerance to herbicide), both of the traits of this GM maize should have been assessed. However, EFSA has not yet carried out the required assessment linked to the herbicide tolerant trait, breaking EU legal requirements. In 2008, the Commission expressly requested the European Food Safety Authority (EFSA) to conduct such an assessment stating that under EU GMO law “it is necessary to cover under the GMO environmental risk assessment the possible effects on biodiversity and non-target organisms which any individual GM herbicide tolerant crop may cause due to the change in agricultural practices (including those due to different herbicides uses)”.

The pesticide trait of 1507 is identified as a clear problem. EFSA states that the pesticide produced by 1507 is 350 times more powerful than the insecticide produced by Monsanto’s MON810 maize, the only GM crop authorized for commercial cultivation in the EU. According to the EFSA GMO Panel (2011), the Cry1F toxin producing gene presents risks for non-target organisms, such as butterflies, moths and other insects, admitting the lack of knowledge regarding which species are at risk and where these species are in agricultural landscapes. In addition, EFSA also acknowledges that there are no conclusive studies assessing the negative impacts of the continuous presence of this insecticide on other pollinators, such as wild or honey bees, as well as on soil or aquatic organisms.

GMO SITUATION IN THE EU

What GMOs are authorized on the EU market for human and animal consumption?

Besides cultivation, at the moment, on the EU market are authorized for human and animal consumption 50 GMOs, including 29 maizes, 8 cottons, 7 soybeans, 3 oilseed rapes, 1 sugar beet, 2 microorganisms. These GMOs are imported from other countries, outside the EU. They are not cultivated commercially in the EU.

Only 1 GMO authorized for commercial cultivation in the EU

New GMO applications for commercial cultivation in the EU: 4 withdraws and 9 remaining in the pipeline.

The GMO industry continues to shrink in Europe. The mandate of the current European Commission is ending towards the end of this year. Will they take the right decision, to refuse the authorization of the 1507 GM maize, in honor of the people, the animals, the land and the biodiversity? All of Europe is waiting…

Today, citizens protested outside of the German chancellery ahead of next week’s European Commission vote on the matter. […]

NGOs demand government to withdraw GMO authorisation, both for commercial and field trial use […]

The European Commission envisages a future CAP where funding is based on performance. How could such a delivery model ensure more ambitious environmental policy rather than business-as-usual? The IEEP provides some ideas.
[…]