Polish environmental and social organisations have published their position paper regarding the most important features of legislative package for the CAP 2020. The NGOs are calling for an end to supporting factory farming, thereby creating a space that will allow other parts of the world to build their own agricultural policies and food sovereignty. 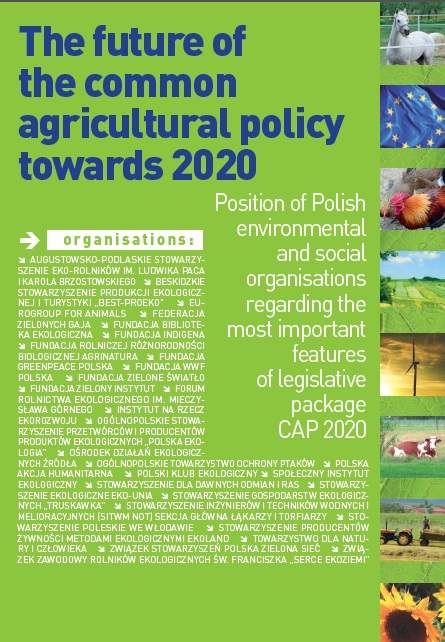 The European Union, the world’s largest exporter and importer of agricultural products, can play a crucial role in the fight against food price volatility. For this purpose it can use the CAP instruments governing production to reduce the risk of overproduction and shortages in relation to the needs of European consumers, creation of buffer stocks, etc. The CAP should not subsidise, directly or indirectly, any food exports which could harm agriculture in developing countries by dumping agricultural products.

Furthermore, Polish NGOs believe that the Common Agricultural Policy impacts negatively on the countries of the global South, by creating strong demand for animal feed, mainly GM soya beans produced outside the European Union e.g. in Argentina or Brazil. To change this situation they propose further support to the domestic production of protein crops for use as feed. This will allow Europe to become independent of the mass import of soya beans and enhance the food security of the European Union. At the same time it will help the countries of the global South to avoid huge negative social and environmental impact of soy cultivation.

Letter From The Farm | Looking Beyond The Farm Gate

We’re back on Ciasnocha Family Farm in Poland, where bad weather and the pressures of war in neighbouring Ukraine have made for a difficult season of haymaking. Right now many decisions are on hold as they wait for the new year and a new CAP. Meanwhile, Mateusz has had the privilege of fruitful harvests beyond the farm gate. Meeting other regenerative farmers and young entrepreneurs during a trip to the US has energised his advocacy work. […]

The Carpathian Civil Society Platform is gathering energy for change in the borderlands that connect Ukraine, Romania, Hungary, Slovakia and Poland. These remote mountainous areas have similar characteristics and face similar challenges, such as increasing poverty and social exclusion. With war moving closer to Western Ukraine, the platform’s work to connect civil society actors in the Carpathian mountains has taken on a renewed significance. Report by Sándor Köles, Chair of Carpathian Foundation-Hungary. […]