Last Friday, EU and US negotiators concluded a second round of week-long negotiations, meeting in Brussels to discuss the Transatlantic Trade and Investment Partnership (TTIP).  So what is being said about this round of the still secretive  talks? 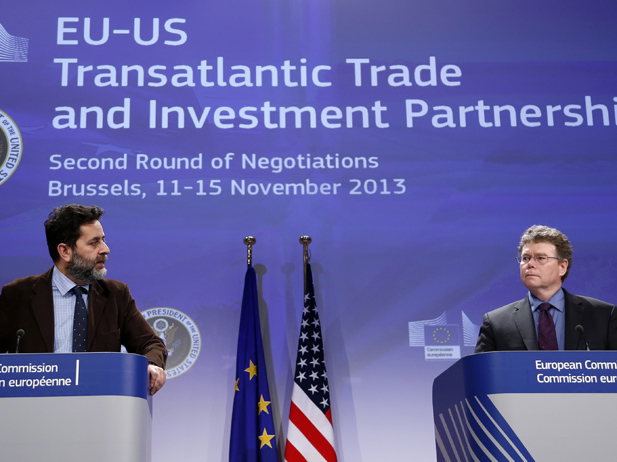 This round of talks was focused on investment rules, services energy and raw materials. “I am glad to see that we are now fully back on track with the EU-US trade talks,” EU Trade Commissioner Karel De Gucht said. “We are making good and steady progress across the broad range of issues we need to tackle to make our transatlantic business environment more efficient and effective whilst preserving the protections and rights already in place for consumers. Let’s keep our eye on the prize: more jobs for people in Europe, more growth for the European economy.” (source)

While De Gucht keeps his eyes on the supposed prize, many of us have our eyes focused on the risks harmonizing regulation could pose, such as lowered standards of protection on environmental and food safety measures. Last week’s negotiation focused on the TTIP investment chapter.  The U.S. aims to include investor-state arbitration; if included, this would allow investors to seek financial compensation for the cost of complying with environmental and other public interest regulations.

Michelle Chan, economic policy director for Friends of the Earth U.S., said, “A TTIP investment chapter would be a corporate power tool. It would allow Chevron and other energy giants to sue governments if environmental or other regulations interfere with their expected future profits by, for example, restricting oil and gas drilling, imposing pollution controls, or limiting the use of hydraulic fracturing. This would freeze in place our current dependence on fossil fuels, and result in climate disaster.”

Magda Stoczkiewicz, director of Friends of the Earth Europe released a statement Friday saying: “It is unbelievable that the EU and U.S. are discussing plans to allow companies to sue governments if they see their profits affected by a democratically agreed decision. It is no exaggeration to say that this is a direct attack on democracy.”

A future meeting to discuss financial services regulation is schedule for November 27th and the next round of TTIP talks will take place in Washington, D.C. in the week of December 16th.  Negotiators hope to agree on a deal by the end of 2014.

UK Landworkers Alliance speaks out on US trade talks