Recently, my colleague and friend Vasso Kanellopoulou, environmental journalist and researcher, had the pleasure in participating in the Panhellenic Local Seeds Exchange Festival organised by Peliti in the north of Greece. This year the Seed Exchange Festival lasted three days, two of them devoted to an international gathering of seed activists (“International Seed Days in Greece 2012”). Peliti collects, distributes and saves local seed varieties, as well as recording native animal species. It is part of a strong European and international social movement for the protection of traditional seeds and for the return of seed control to farmers. Here are her impressions and thoughts on the great efforts of local farmers to save their seeds. 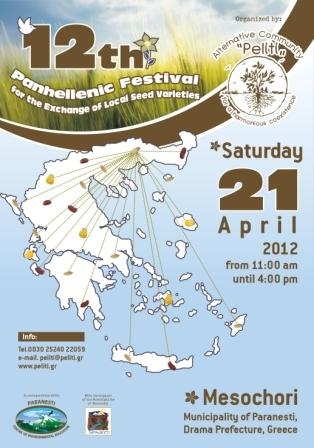 The festival was a great success! On the first day, fifty growers from all over Greece distributed their seeds to the visitors. More than 20,000 little seed bags and 7,000 seedlings were distributed among the 7,500 visitors. Over the next two days, information was exchanged and ideas were put forward for protecting local seed varieties in Europe. There were representatives from 13 countries, including Austria, Belgium, Bulgaria, the Czech Republic, France, Germany, Morocco, Portugal, Tunisia, Turkey and Switzerland.

On my return to Athens I reflected on the importance of the work done by organisations such as Peliti. Since the dawn of agriculture, seeds have been the basis of the food chain and food security. Whoever controls seeds controls our survival. Up until a few decades ago control was in the hands of individual local farmers who produced their own seeds for use the following year. But gradually, and without much publicity, a legal net has been woven around our relationship with seeds. We have reached the point where in many countries the production and sale of seeds by farmers has become illegal. Farmers are obliged to buy so-called commercial seeds from transnational companies. Many traditional varieties have been lost.

We are now facing a dangerous oligopoly. 10 seed companies – among them Monsanto and Syngenta – control 73% of the global seed market. The commercial seeds are either hybrids (F1) or genetically modified. In both cases they are legally protected against farmer reproduction. However, the development of all these commercial seeds has been exclusively based on the traditional seed varieties developed by anonymous farmers who never asked for a legal protection of their invention, so the companies were able to use them for free.

Traditional varieties are considered a common good. The lobbies of transnational companies do not like this because they are losing a segment of the seed market. As a result of the pressure they exerted on the EU it is now illegal to sell or exchange traditional seeds or the products of these seeds, if these are not registered in official catalogues, based on certain criteria which are not suitable for these seeds anyway!

Many NGOs are now working to create public awareness of the problem and demanding immediate changes in the legal structure. Beyond that, some civil society associations are trying to support the reacquisition of lost knowledge: in developed countries the majority of citizens, farmers and gardeners have lost the ability to reproduce seeds. This ancient knowledge is no longer transmitted from generation to generation. It is through these associations that young people are now re-learning this basic know-how. When more citizens have re-gained this capacity it will be very difficult for the transnationals to promote their agenda. Hopefully it will be possible once more to decentralise control over our food chain so as to support biodiversity and adaptation, and release many farmers from the financial burden of buying new seeds every year.

“From hand to hand, from generation to generation, so that we do not lose tomorrow what we have today” – Peliti