Following the gaps in compliance for cage eggs across the EU, European farm welfare campaign Compassion is warning of similar shortcomings with EU law to restrict the use of sow stalls that is due to come into force on January 1, 2013. UK pig farmers got rid of sow stalls by the end of the last century and will be joined next year by nine other fully-compliant Member States. 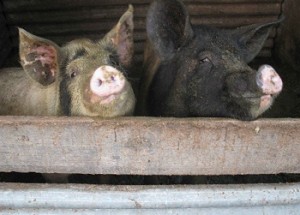 Of these, Ireland and Denmark traditionally ship substantial volumes of pigmeat to the UK and retailers have been routinely requiring the same production standards that British farmers have to meet. The Netherlands, another significant supplier for the UK market, has had stall-free farms producing pigmeat for UK retailers for years.

According to European Commission data obtained by Compassion, the other compliant Member States from 2013 will be Bulgaria, the Czech Republic, Estonia, Germany, Lithuania, Luxembourg and Sweden. There are gaps, however, in the Commission’s data from some countries, including Portugal, Belgium and France.

“This should set alarm bells ringing at the Commission and the 17 Member States that are not going to comply with the ban,” warned Compassion’s chief policy adviser, Peter Stevenson.

“They need to get hold of the situation very quickly to stop this important step for animal welfare becoming a farce,” he added. “It’s unacceptable for so many countries to be behind schedule, when they have known for a long time that these rules would be coming into force on January 1.”

Like the battery egg cages, the changes required often mean demolishing and rebuilding animal houses. The long lead time set at the outset was intended to allow for the necessary investment and reconstruction work.

As the eagerly awaited EU Commission Farm to Fork and Biodiversity strategies are about to be released tomorrow, a battle is on for the specifics. […]