As EU Commissioner for Agriculture and Rural Development, Dacian Cioloş continues his tour of European capitals to gauge the position of different Member States, Spain and France, among the top recipients of the CAP budget, announce a common position on the CAP. The announcement joins an emerging series: The CAP, France and ‘please insert EU Member State name here’ 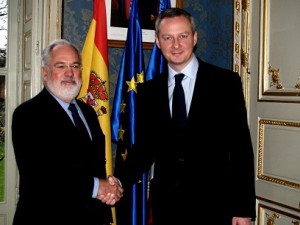 The announcement came after Spanish Minister of Agriculture, Food and Environment Miguel Arias Cañete, and his French counterpart, Bruno Le Maire met in Paris on 14th February. It is clear the two countries wish to form alliances in order to negotiate their position. Indeed this is exactly what Arias Cañete has stated after his visit to Paris and Lisbon:

“I have noted that there is a bloc of countries with similar interests, that can allow a solid basis for negotiations, with more weight, in the last stage of the community negotiations.”

The main points of their joint statement addressing the Commission’s proposals are:

The position of the Spanish government has been criticised by environmental NGOs, that claim “that the government’s position, as well as of the autonomous regions and the agricultural sector defends the interests of only a few, while maintaining a proven detrimental model for the extensive farmers and ranchers and the environment.”  WWF and SEO/Birdlife in Spain “call upon the Minister to reconsider its position, opting for a CAP that is truly sustainable, intelligent and inclusive, that fits with the Spanish reality.”

See a recent ARC story on a similar meeting between Le Maire and the Italian Agricultural Minister at the end of January.

Following the lead of French, German and Italian food and farming coalitions, this March saw the launch of Coalición Por Otra PAC, a chance for Spanish civil society to join forces to push for a truly sustainable CAP. Marta Zygadlo reports on who the coalition is and what they are trying to achieve. […]