State Domains Agency is a Romanian government agency specialized in the privatization of national companies involved in agriculture. It also leases the state-owned agricultural lands which were part of the ex-communist mega-farms and are administered by these companies. Founded in 2001, it is a public institution with commercial and financial characteristics under the direct authority of the Ministry for Agriculture, Forestry and Rural Development. The agency’s main tasks are the administation of state-owned farmland operated by state companies, including research laboratories, and the acquisition or exchange of agricultural lands for their lease or rent. 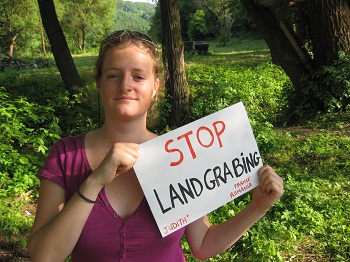 In 2009, the Agency owned 530,000 ha of land, mostly prime quality arable land from the south of Romania. Twelve years since its establishment, it is an inexhaustible source of valuable lands  given away cheaply and fraudiously or exchanged with unprofitable plots. According to recent declarations of Agricultural Minister Daniel Constantin, the State Domains Agency has to recover millions of Euro from debtors, most of them private multinational companies registered in Romania, which went bankrupt or into insolvency and were not being monitored in due time by the institution. The Minister presented the report over the activity of the State Domains Agency to the Control Body of the Prime Minister, which states that the institution has to recover less than 18 million Euro from these companies. Moreover, the agency does not have records of the exact areas which it governs, data which they were supposed to compile by the end 2009. Daniel Constantin also stated that the report was forwarded to the National Anti-corruption Agency as “the State Domains Agency representatives’ actions can be considered as professional negligence with serious consequences”.

Some of the wealthiest businessmen in Romania, like the Romanian Culita Tarata (with 57000 hectares of land leased from the State Domains Agency) or the Lebanese Jihad El Khalil, are “caretakers” of tens of thousands of hectares of state owned land, building businesses while paying royalties to the state.

Jihad El Khalil, head of Maria Trading and Agro Chirnogi, one of the worst land grabbing cases in Romania, has five contract deals with the State Domains Agency, renting over 11,000 ha of agricultural land in total. The company’s activities rely extensively on industrial agriculture and heavy use of agrochemicals. Before Romania’s accession to the EU in 2007, the company was also in the business of cultivation of genetically modified soya. In 2006, 4,700 ha of genetically modified soya was cultivated by El Khalil’s company, and in 2009 the company was still planting the genetically modified maize MON810 on 150 ha.

While the government admitted that public lands ended up being subject to agricultural speculation, generating short term profits for multinational investors while neglecting their financial obligations towards the country, it has also started the preparations for the upcoming 2014 deadline for the liberalization of the country’s real estate sector, as accepted under the terms of EU accession. Officials promise a continuance in the trend of land consolidation, thus supporting the same actors which were behind past deals and fails.

“The State Domains Agency must have the role to intervene on the land market. To buy small parcels and to sell large surfaces. In other words, to help in the land consolidation process. To buy parcels of 2-10 hectares and to sell at least 100 hectare ones”, specified the Ministry for Agriculture earlier this year, proposing a set of regulations which would give preemptive power to the agency.

Unfortunately, these measures would favor land grabbing on many levels. First of all, land consolidation would create large “ready to exploit” surfaces for agribusiness. Secondly, it would create an unfair competition between Romanian farmers and investors and those coming from a more established economic background, having the financial power to acquire large land surfaces. The bottom line is that, while the average land price, 2000 Euro/hectare, might sound like a bargain to some, it is unaffordable for most Romanians.

Finally, it is important to underline that the companies mentioned, and many others which leased public land from the State Domains Agency, figuring with high debts towards the Government, are also receivers of huge European agricultural subsidies. In 2011, El Khalil’s Maria Trading received over 875,000 Euro in European and national subsidies.

While the Ministry evaluates the damage made by its State Domains Agency and decides its role in the future dynamics of Romanian land deals, important questions still remain unanswered: What can Romanian farmers do in this situation? Will Europe continue to subsidize land grabbing? Because currently, Romania is perfectly set up to encourage exactly that.

Rural Development Network – on its feet and walking

Romania signs Danube Soya declaration, or did it?