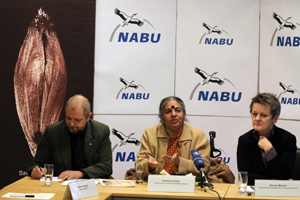 Berlin, 7th December 2011 – Following press conferences in San Francisco, London, Rome and Paris, German-based NGO and ARC signatory, Save Our Seeds, along with Naturschutzbund Deutschland (NABU), invited Vandana Shiva, winner of the Alternative Nobel Prize, to speak at a press conference in Berlin. The event was held to discuss the report, “The GMO emperor has no clothes – A Global Citizens Report on the State of GMOs” which comprises reports from environmental and consumer protection organisations from across the world, including one from Save our Seeds.

The study points to the false promises of agro-biotechnology industry and the damage it is doing to the environment and individuals. Vandana Shiva summed up the results by saying “genetically modified seeds neither increase crop yields, fight world hunger nor reduce the use of pesticides”. In fact in many cases, they have done the very opposite.

Also on the panel at the event were, Renate Künast, President of the Greens and Christian Unselt, Vice President of NABU.

Find the report synthesis on the ARC website here

Texting Cows, AGTech & the Future of Farming in Germany

Automation and digitisation are rising in farming and the broader agri-food sector. Germany – industrial powerhouse of Europe – seems an obvious place to embrace AGTech. From precision farming and data ownership to embodied energy and cost, what are the opportunities, the impacts and the implications? And how are agroecologists responding? […]

ARC2020 talks to the team at Markthalle Neun in Berlin

As Berlin prepares to take action against factory farming, we talk to some of the organisers […]