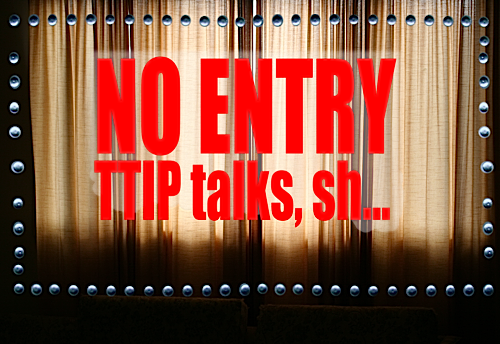 The EU’s most recently-formed advisory group met for the first time on Tuesday this week to listen to the EU’s chief negotiator on the Transatlantic Trade and Investment Partnership (TTIP), Ignacio Garcia-Bercero. Meeting between negotiating rounds, the 14 hand-picked stakeholder representatives can look forward to “…frank explanations and updates on progress…” with the secretive transatlantic trade talks.

In return for becoming part of the stakeholder charade, advisory group members will: “…represent a balance between business and non-business interests, including consumer interests, labour law, and other civil society interests, in particular public health and the environment.” If there is to be any good news in the public domain, it would be that access to advisory group files is promised under the EU 2001 document access procedures (1). However the terms of reference  instruct stakeholders that: “In particular, non-public EU documents related to the negotiations (including but not limited to negotiating documents) and non-public details about the negotiating positions of either party, shall be treated as confidential.” Should there be any doubt as to what that might mean, here is the closing paragraph, which tells stakeholders: “…to use their best efforts to prevent it being disclosed to any person outside the TTIP Advisory Group or the EU TTIP negotiating team, or from falling into the possession of others, or into the public domain.”

What trade commissioner Karel De Gucht has made available in the public domain is frankly lame. In answer to the frequently asked question “Are the negotiations being held in secret?” a simple yes or no would have done. De Gucht is a past master of being blunt. But the circuitous three-paragraph response is more a statement of good intentions than a clear answer.

On the basis of an implied requirement for closed sessions, discussing the livelihoods of millions of people is trivialised: “…you need a certain degree of confidentiality, otherwise it would be like showing the other player one’s cards in a card game.”

As the talks proceed: “…the European Commission will continue to reach out to trade associations, consumer organisations, industry and other representatives of civil society.” At the end of the process, Council and European Parliament will be handed down a package to accept or reject.

Until that time, in what is doubtless an innocent typing error: “The European Commission will keep the Member States – in the Council – and the European Parliament of developments.” With luck, the missing word might have been “informed.”

In the absence of meaningful official TTIP documents, one has to look to parallel talks for an idea of what is being discussed. Wikileaks has posted some working files from the eastern-facing Trans-Pacific Partnership where a dozen states with Pacific seaboards have been in talks for a while.

These include a working draft of the environmental chapter on the table at Salt Lake City, although talks on this topic stalled after negotiators failed to agree a definition of environmental law. What was clear however, from an account of the positions around the table, is the intransigence of the US negotiators in refusing to budge from their starting positions.

The US is in a TPP minority of one in rejecting the abolition of state subsidies for agriculture. This is repeated with the US acceptance of certification without backing documents. Whatever “importer knowledge” might mean, no-one else around the table wanted to know. Only Mexico and Australia share the US position on an annex covering biotechnology.

So when De Gucht told a London business audience last week of common misgivings over TTIP, the first one is worth quoting verbatim. Across the poor world, notably in Africa, national governments have been passing structural legislation to pave the way for GM seeds and the suppression of indigenous plant varieties. In front of a European audience, the trade commissioner does little more than dig a deep hole deeper:

“First, regulation: Some people are afraid that the Americans will force us to stop protecting our environment, reduce regulation of banks, eat hormone-treated beef and change our legislation on GMOs.

“I have been very clear on this point in the past. But I would like to make it clear again: we will not be doing any of that. It’s not going to happen.” 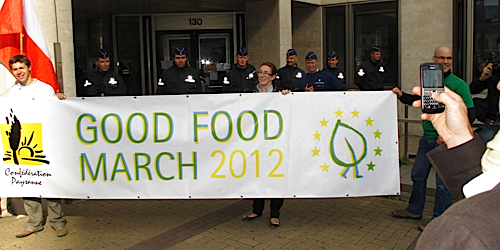 Don’t forget to go with friends when visiting the European Commission — and SMILE!

If it is not going to happen, then it will be because EU citizens raise their voices loudly enough to be heard clearly by the European Commission. Whether the Commission will listen is another matter, however.

plummeting prices despite the all the signals and scientific evidence have made the Commissioner’s position untenable, the EMB claim. […]

No majority vote for ban on bee-harming pesticides

UK and Germany not in favour of temporary ban, despite strong evidence on disastrous impact […]