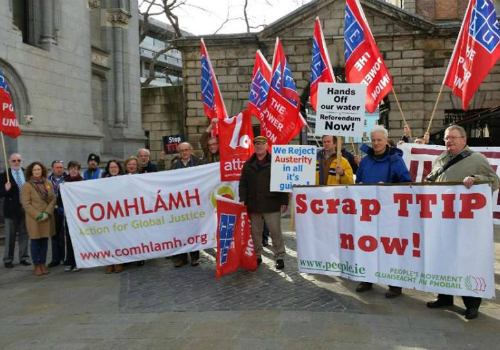 The organisation made reference to newly published Copenhagen Economics report, commissioned by the Irish government, which identifies, in the words of IFA President Eddie Downey “very negative impacts for Ireland’s vital beef sector”.

According to the IFA “following a meeting yesterday with the authors of the report, both Copenhagen Economics and officials from the Department of Enterprise Trade and Employment accepted that TTIP presented very significant risks to both our beef and white meats sector.”

Beef is the largest agri-food sector in Ireland, employing over 70,000.

The Copenhagen Economics report was commissioned to assess the potential impacts of TTIP on Ireland. While positive on potential jobs growth, citing up to 10,000 new jobs for Ireland, it also predicts that the Irish beef sector will be badly hit by TTIP.

The IFA’s new position paper on TTIP says “as a fundamental principle, EU negotiators must insist on equivalence of standards. That is, all US imports must meet the same animal health, welfare, traceability and environmental standards as is required of EU producers.”

This echoes the European Parliament report of last year , which saw the overall value of EU agriculture projected to fall by 0.5%. Irish beef, in particular the suckler cow sector, as especially vulnerable.

The IFA point to the following differences between EU and US beef production:

They argue for equivalence of standards, designation of beef as a sensitive product and retention of some tariff controls.

In a radio feature (available to listen to outside of Ireland) on Ireland’s main radio station RTE 1 European Trade Commissioner Cecile Malmstrom, made reference to the potential of the  European Globalisation Fund as a mechanism to offset jobs losses arising from a trade deal. She also refered to the fact that job growth in general will compensate for job losses in specific areas.

Tom Healy of NERI also appeared on this radio feature, where he criticised  the both the Copenhagen report’s methodology and the growth assumptions for TTIP Malmstrom and others use (9 mins in). Healy drew attention to Capaldo‘s October 2014 report, which suggested a completely different picture with regard to exports, GDP and employment, where losses were assumed, along with increased financial instability.

Barry Finnegan of the TTIP.ie information network also responded to the Maelstroom visit, and the pro TTIP Irish government agenda, with range of concerns. Again, growth assumptions were a key area of criticism.

He also pointed out that the main barriers remaining in EU US trade are non-trade barriers anyway, so it is precisely in the areas of “rules and regulations relating to democracy, public services, workers’ rights, food and the environment” where trade increases will be earmarked. Finnegan was also scathing on Investor-state dispute settlements – ISDS’s – and  drew attention to criticism of the Copenhagen economic model as laid out by Ackerman and Gallagher (2008).

All Arc2020 TTIP news and views

All Arc2020 features on Ireland

A new report, co-funded by ARC2020 and the Centre for Co-operative Studies at University College Cork, and set to be published in early April, will aim to unpack just what a just transition will mean for Irish farms and rural communities. It comes ahead of two events taking place at Cloughjordan Ecovillage on 22 April, which will examine practical scenarios for a just transition, and farm diversification, in rural Ireland.  […]