The UK’s National Farmers’ Union (NFU) remains as committed as ever to its dogged defence of bee-killing neonicotinoid insecticides. Back in April, ARC2020 reported the flaws in a piece of UK government-funded research that purported to show that this group of insecticides was somehow innocuous to pollinators in the field. Working with a compromised control group, the study carried out by DEFRA’s research arm FERA was not peer-reviewed, but posted on a ministry website without clearly identifying the researchers. 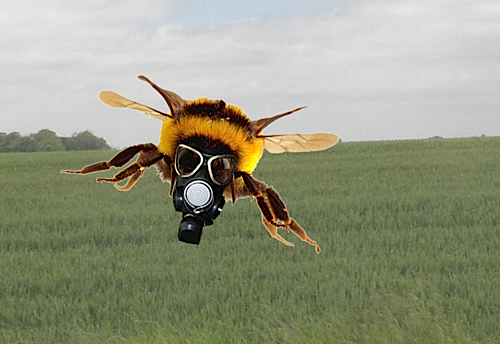 The work did meet one organisation’s standards, however. Over the summer, lead author Dr Helen Thompson successfully landed a job with Syngenta. Her departure from the ministry was remarked upon in the House of Lords but considered normal by bee minister Lord de Mauley.

The NFU is putting its members’ money where its mouth is, with plans to support both Bayer and Syngenta’s legal challenge to the EU neonicotinoid moratorium. NFU director general Andy Robertson explained that: “The NFU is concerned that the restrictions were made without a clear basis in science and as a result will harm NFU members’ ability to farm productively and sustainably.”

He repeated the ‘sustainable’ buzzword, too. “This sustainable approach depends in part on the availability of a diverse range of pesticides, and the erosion of active ingredients on unjustifiable grounds increases the risk of pest, weed and disease resistance.”

These products have been tested for toxicity to humans. They are sold to kill insects. But there is simply no way that neonicotinoid seed dressings can be proven safe to the environment when 98% of the active ingredient applied to the seeds is effectively dumped in the soil and left to haunt the biosphere.

The Canadian National Farmers’ Union, on the other hand, is calling for a five-year moratorium and is far more circumspect about neonicotinoids. So, too, is the Ontario Ministry of Agriculture and Food, which is also recommending restraint and promoting alternatives (also in French).

ARC2020 and other NGOs issued an open letter in the context of reforms to the DG’s advisory groups and concern of the effects of the agribusiness lobby. […]