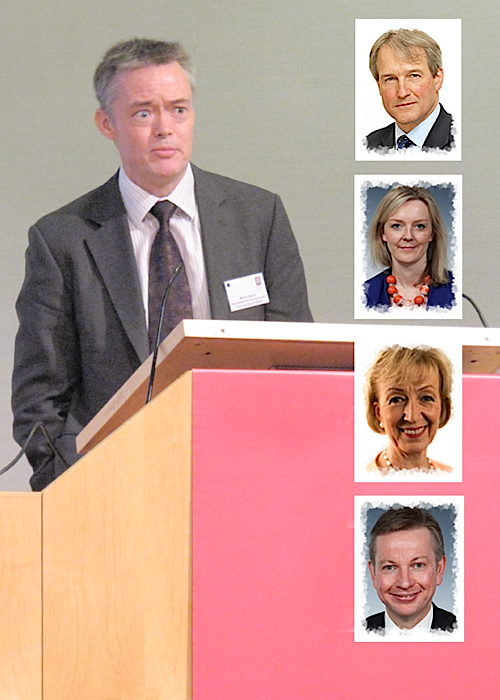 Back in 2011, ARC2020 carried a report from a CAP reform conference held in London. Among the speakers was DEFRA negotiator Martin Nesbit, who appears behind the lectern in this picture, taken at the time. He looks startled because he had just been asked what he needed most to be effective in European negotiations. His reply was an experienced and knowledgeable minister, with at least two years’ experience at the UK’s environment and agriculture ministry DEFRA.

Since that day, many ministers have come and gone, with none of them lasting two years. The UK is about to go into Brexit negotiations with a political maverick, Brexiteer Michael Gove, in charge of DEFRA. Here are are a few of his predecessors’ contributions to posterity.

When challenged over a failed badger cull, he accused the animals of  “…moving the goalposts.” As we reported at the time, it was one of a series of political own-goals Paterson scored during his political career.

Her efforts to promote British food somehow failed to convince.

A controversial advocate of fracking and opponent of agricultural subsidies Leadsom was one of the least convincing environment ministers on recent years. Here Scottish farmers putting her  right on the difference between “promise” and “action”.

We’ve done a detailed exposé of Michael Gove already, in this article from Miles King. Here’s Gove shows his ability to retain figures between his ears in recent weeks. He should go far. As far away as possible.

Richard Ashworth, MEP for the Conservative Party hints that the UK might go against the EU grain, again […]