Business-driven environment minister Owen Paterson does not avoid controversy so much as go out of his way to invite it. This weekend, he told his local paper The Shropshire Star that the county should welcome fracking: he even described opposition to something as ‘unobtrusive’ as fracking ‘extraordinary’. 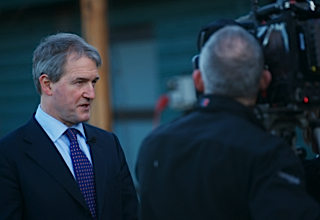 Paterson is at loggerheads with coalition partners, the Liberal Democrats, over fracking. The Lib Dems argue that Paterson is wilfully ignoring the contamination of water tables and other environmental damage that fracking has wreaked in the US.

The minister is also embroiled in a long-running row with Lib Dem energy secretary Ed Davey over a parliamentary report into energy sources, which is believed to argue that wind turbines can harm rural areas. Paterson also told The Shropshire Star last week that DEFRA is committed to publishing the findings, even if the Department of Energy and Climate Change (DECC) drags its heels.

Paterson is on record earlier this year as saying that wind farms are  ‘complete scam’.  The Tory minister also knows that many Conservative supporters are angry that prices of rural housing in the vicinity of wind farms has dropped.

Global warming has fallen off the radar at DEFRA. This year has seen the number of DEFRA staff working on climate change cut from 38 to 6.

Having granted huge tax breaks to the fracking industry, the UK government has already skewed the growth prospects for the renewable energy sector in favour of a particularly hazardous fossil fuel extraction technology. There is no data yet on how fracking impacts UK house prices, nor is the property market an indicator of any relevant environmental measurements, however electorally sensitive.

Paterson has been particularly supportive of the biotech lobby in recent months, readily wheeling out an arbitrary list of numbers that supposedly suggest that biotech is somehow harmless. The fact that these numbers come directly from the biotech industry is not mentioned when they are quoted at official functions.

This kind of duplicity extends to the way the next CAP reforms are likely to be implemented. By dint of raising the direct payment threshold from one to five hectares, Paterson is preparing to withdraw Single Payments from 16,000 farmers.

This is justified primarily on the grounds that it would be too costly to administer these applications. The deciding factor appeared to be that the majority of holdings in this size range are not run for ‘business purposes’.

Just to raise the entry level that bit further, CAP payments will be administered online. This online-by-default policy comes regardless of whether rural internet connections are reliable enough to support such a move.

Anyone who is curious as to what use a modern government department might make of the internet should have a look at this account of a Freedom Of Information application reported in Farmers Weekly. Facebook and Twitter account maintenance doubtless accounts for some of the traffic on these sites, but cricket scores and online shopping site Amazon are not exactly the work of government. Nor would many of the sites listed load on a lot of rural internet connections.

What’s the reality behind the rhetoric of the EU’s CAP and LIFE Program? […]