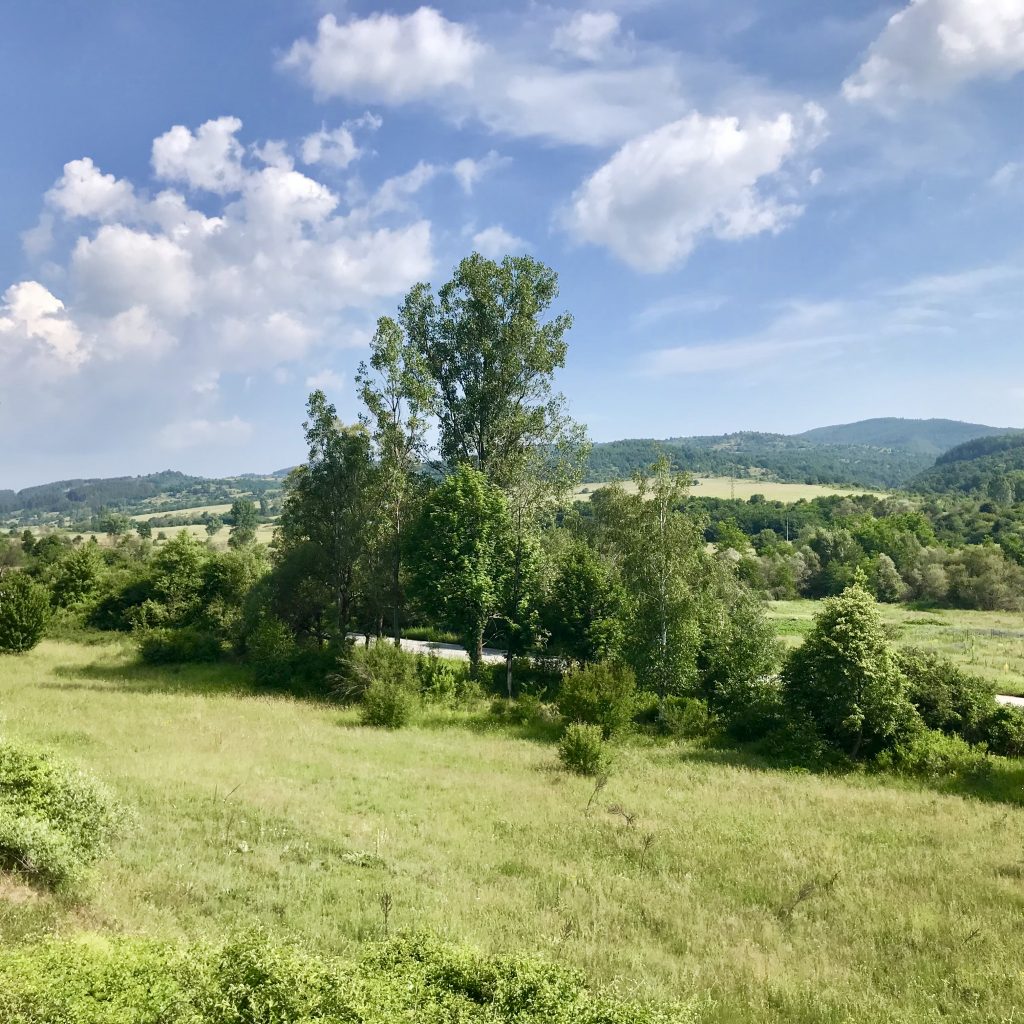 On June 4, 2018, Magdalene Trapp and I presented a study on the environmental impacts of the CAP in Bulgaria in Sofia. We had an in-depth look into the situation of the agricultural sector, the environment and the CAP implementation. We interviewed farmers, experts and stakeholders in March 2018, to get insights into the specific developments of Bulgarian agriculture. In the second part of our study, we simulated the potential effects of a CAP reform, which would be more oriented towards environment and biodiversity. Part two of this article explores the latter.

The study was financed by Naturschutzbund e.V. Germany (NABU), the German BirdLife partner. The event in Sofia was organized by BirdLife International and the European Environmental Bureau (EEB).

After the EU accession in 2007, the agricultural sector experienced a dynamic development. The sector in Bulgaria is still influenced by the post-socialistic transformation, which can be seen by the dualistic structure of the farm sizes, with a large group of extremely small and semi-subsistence farms and a small group of very large farms. Furthermore, structural change in the sector is a major trend, where the number of farms with an standard output (SO) larger than 0.5 Mio. EUR more than tripled between 2005 and 2016. During the same time, all farm types larger than 20 ha were substantially growing. On the other hand, there are still many small farms, where such a development will be difficult, especially, if farming families are already older. This highlights another challenge, the demographic structure of the sector.

Bulgaria has also profited from the trading opportunities through the EU accession. We can see, that after 2007, trade with Germany (one of the main trading partners) has been growing significantly, on both imports and exports. This is described in the following figure. So the EU accession has provided opportunities for the sector, however, also meaning an increased competition. 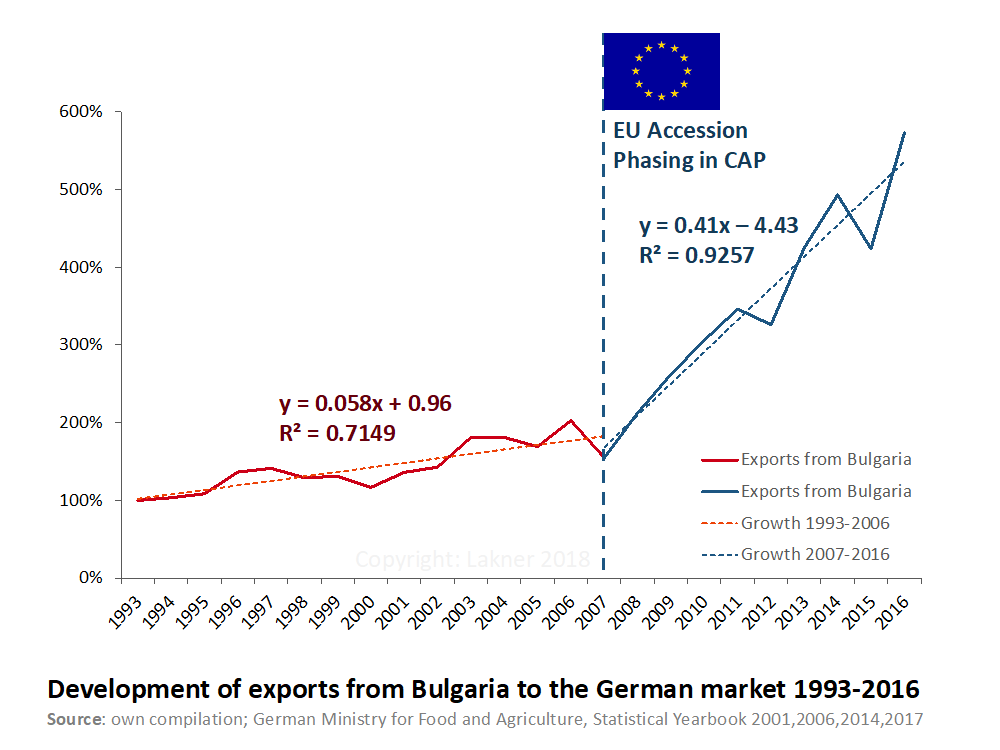 The sector itself has improved technologies and increased yields. At the same time, inputs have increased as well and to a larger extent. This resulted in a moderate growth of Total Factor Productivity (TFP), which describes the relation between input and output and which shows that the optimal input use has not yet been achieved. These results (provided by DG Agri) suggest, that other Eastern EU countries like Hungary and Romania show similar problems. So overall, there are still productivity problems in the sector.

Focusing on the environment, Bulgaria has a rich biodiversity to provide, so that there is a lot at stake. In Bulgaria, about 30% of the land area is covered with sites classified under the EU Birds Directive ((Fauna Flora Habitat (FFH) Directive within the Natura 2000 network), which is substantially above the EU-average of 13.8% (EC 2016f).

However the implementation, strong on paper, suffers from weak enforcement. Of the habitats protected in the Habitat Directive, only 11% show a favourable conservation status, which is extremely low. On 88% of the habitats the status is unfavourable, meaning that the specific conservation targets are disturbed by external influences. The situation of the protected species is a bit better (here 54% of the habitat have a favourable status). However, we find birds species are declining: the Birds Index provided by the Bulgarian Society for the Protection of Birds (BSPB) has declined by 21% between 2005 and 2013. The country report of the Bulgarian Government also shows that agriculture is be the second most important pressure on the conservation targets -only direct intervention into conservation area are more important. Agri-environmental policies are key to achieve conservation targets. So we concluded that the Bulgarian agricultural sector has a “sustainable productivity problem”.

The CAP in Bulgaria needs a more efficient and transparent implementation

CAP implementation in Bulgaria is critical given the described challenges: As other Eastern EU countries, Bulgaria extensively used the option to couple payments to specific production branches. And adding to this, Bulgaria (as also Romania and Croatia) pays “Transitional National Payments”, which are also coupled to specific branches. The following figure provides the financial details of both pillars in Bulgaria. 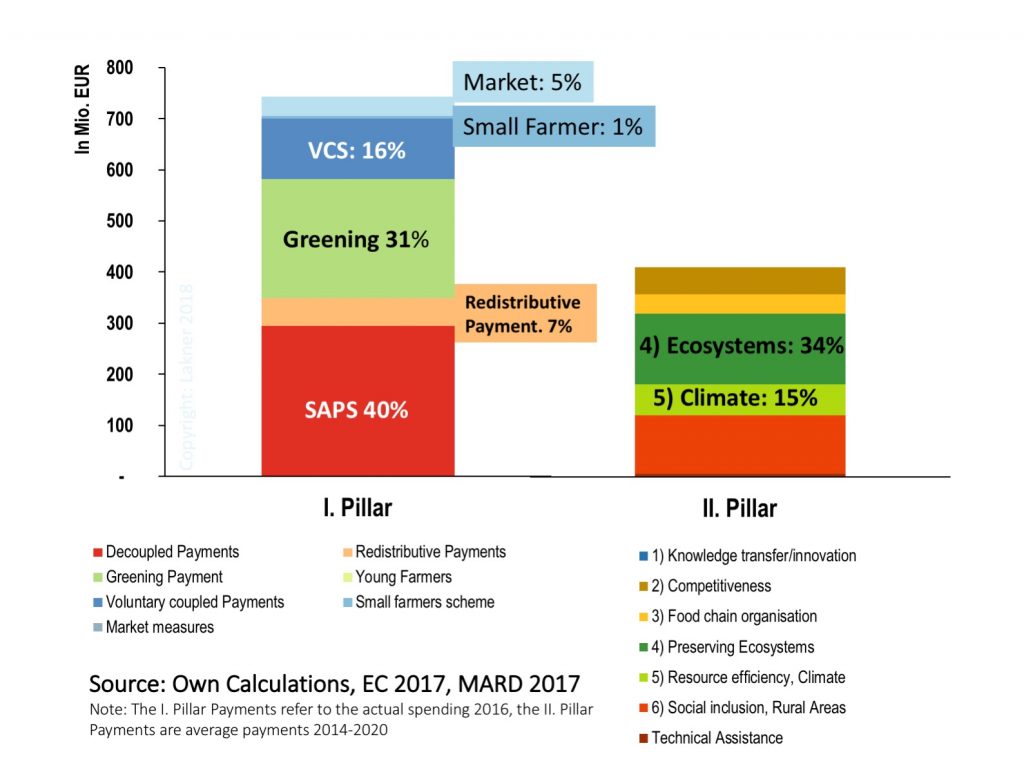 Note that we also found a number of problems in the Rural Development Programs: The high share of priority 4 and 5 (ecosystems and climate) is to certain extent misleading, since many measures are investment measures, where the outcome is unclear. A large share goes into payments for Area with Natural Constraints, which have no environmental effects and the share of agri-environmental programs and on organic farming is low in comparison to other member states.

What is critical about direct payments?

We know from the literature, that especially these types of subsidies reduce farms efficiency and competitiveness, since farmers decide at least partly based on subsidies provided, and not on market demand.

Furthermore, these subsidies are “rents” to producers of specific crops or livestock producers. For the livestock sector, we might still argue (based also on previous experiences in Romania) that this could help small farmers, since the distribution of animal-related payments might rather be in favour of small farms (e.g. low Gini coefficients). This is different in the cropping sector, where these payments are unequally distributed and show a distorting effect: there are subsidies for protein crops, cotton, tobacco, vegetables or fruit producer, which also brings in complexity. In the end, this type of coupled support motivates specific producers association to lobby for a specific payments for their members. In consequence these payments can lead to non-transparent decisions and in a worst case scenario to corruption.

Overall, these specific subsidies and the following process of rent-seeking is a an economic waste of resources for the whole economy of a country. On the farm level, farmers do not decide efficiently, the political competition is mainly on who gets support and who doesn’t. So what could be the most beneficial measures of policy and tax payers get nothing in return for coupled payments.

In addition, farmers reported on different issues, where the CAP implementation led to environmental damages in Bulgaria. The direct payments are linked to farmland. Combined with a weak enforcement of property rights and fraudulent behaviour, the incentives of direct payments led to a substantial conversion of grassland to arable land. Bulgaria is among the EU countries with the sharpest decline of grassland. It is hard to say to what extent we can generalize these problems with legal enforcement, but we got these statements quite a lot from farmers and stakeholders. Adding to this, the Land Parcel Identification System (LPIS) has the requirement that grassland eligible for direct payments has to have fewer than  50 landscape elements per ha. Grassland in Bulgaria has traditionally many bushes and shrubs, which has many advantages for grazing livestock but also for biodiversity. This LPIS requirement incentivizes the removal of these elements, which is substantial problem for the environment.

Overall, we could find many negative environmental impacts, which was to a certain extent surprising, since one would not expect that decoupled payments have such an influence on actual production. But combined with the weak legal enforcement and missing controls, the system is damaging the environment. This again highlights the need for a better enforcement of legal rules but at the same time also a better implementation of the CAP for two reason: productivity and efficiency will profit from a less complex implementation and on the other hand, it would also help to reduce the environmental side effects.

There is one detail in Bulgaria which is positive. Within the Rural Development Program (RDP), Bulgaria is using 4.8% of the funds for Natura 2000 support. This is the largest share within the EU and a step into the right direction. However, the implemented measures can still be improved and also aligned with the agri-environmental measures. The collaboration between these two instruments are weak (as BSPB reports) and the implementation of agri-environmental and climate measures (AECM) is inefficient and problematic. Farmers reported on missing information and non-transparent provision of contracts. So it is not clear whether farmers can get contracts with the authorities. Furthermore, the requirements change often and sometimes there is not enough money to offer contracts.

Importantly, there is no extension system, which also leads to a low uptake of AECM: In the period 2007-2013, only 12% of the area was within contracts for biodiversity. For water management and soil erosion it was only 2.5% and 1.2% respectively. So there is a lot to do.

Part two later this week will detail a suggestion for just what to do.

When we change how land is used, it doesn’t just impact on this one area. Italian trio Riccardo Scalenghe, Francesco Malucelli and Mario Catizzone examine soil matters in the Emilia-Romagna Plain, Italy, and help us understand what is truly lost when we loose soil without thinking about all the impacts. […]

Coping with Covid19 – Tensions in Farming, Trade and the EU Institutions

The COVID-19/Coronavirus outbreak is already disrupting international supply chains as more countries close their borders. Questions remain as to what this will mean for European food supplies and agricultural trade, as well as for how the institutions relate to member states.  […]