Yesterday, at the Summer Action Camp in Wietze, ideas were being exchanged as fast as the poultry being packaged down the road at Europe’s biggest poultry slaughterhouse. The slaughterhouse is working up towards their capacity of slaughtering 430,000 chickens daily.  Ideas, like our environment and economy, have a hard time keeping up with those numbers. 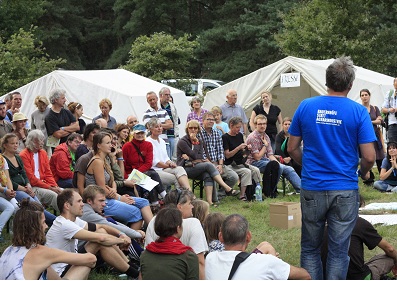 Cycling from the train station in Celle, along a forest-lined street and through the tiny town of Wietze in Lower Saxony, I noticed brick homes displaying banners proclaiming opposition to factory farming before reaching the slaughterhouse itself. It’s hard to articulate the feeling of pulling up in front of such a building, huge and industrial, visibly secured with fences, police, and video surveillance and planted in the middle of a cloud of an awful, unfamiliar and chemical smell. It feels strangely anonymous, marked only by the small shop selling Geflügel (poultry), and yet behind the fences and security, the factory produces one example of the kind of industrial farming that is destroying fair, green and local food and farming.  If you’re curious to see the factory, it’s shown in the last few seconds of this short video clip from German broadcasted NRD, who are covering the event.

Holding our breath, we continued out to the camp to take part in the workshops and enjoy the delicious, freshly cooked meals courtesy of Fläming Kitchen. When we got to the camp the first thing we noticed, beyond the fantastic turnout, was the atmosphere.  Relaxed and engaged, the smaller conversations taking place in and around the tents before and after the workshops kept the flow of ideas and discussions from the scheduled events going.

The programme for yesterday’s workshops can be accessed here : Full programme PDF 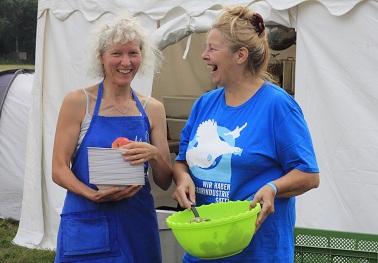 As the workshops ended, plans were made for the demonstrations taking place today and excitement started to build. Excitement continued as dinner was served, vegetables for today’s meals were chopped in the ‘Disco Soup’, and the legendary DJ Spoutnik played some great music for campers.

Of course, yesterday was really just the beggining.  What’s on the schedule for the rest of the weekend?

More photos from Friday on our Facebook page, here, and from Wir Haben Es Satt, here

In its new report, IPES Food Present Five Practical Solutions For a Sick Food System. How we think about it; who’s involved; how it functions and the role of both alternative food provisioning and science all play a part in fixing a broken food system. […]