“58 million pigs are processed per year in Germany.  The meat industry works efficiently so that it can supply the whole world.  The price is paid by many – in the end, consumers as well.”

As part of their feature on factory farming, the German weekly magazine Der Spiegel interviewed Jochen Fritz, spokesperson of ARC2020 member Meine Landwirtschaft.  Here’s what he had to say*:

SPIEGEL: Mr. Fritz, you organise protests nationwide against agribusiness. What bothers you so much?

Fritz: Many people have no trust in foods that are sold under false labels such as ‘pasture happy’ or ‘farm happy’.  They have an unpleasant feeling, because nobody knows how our food is produced.  This is especially true for meat.  The lack of trust is warranted: when food in Germany is produced under video surveillance and behind barbed wire, something is not right.  We are demanding a change in agriculture, different agricultural policies.

Fritz: We need a fundamentally different system: animal feed shouldn’t come from South America anymore, for example, since we are highly dependent on soy imports.  We also need adequate, humane stalls where animals are kept in conditions based on their needs, not the needs of humans.

SPIEGEL: This sounds more like a fantasy farm than modern agriculture.

Fritz: Quite the opposite.  What we envision is a forward-thinking form of agriculture. We don’t want to produce the way we did 100 years ago.  But today’s version of industrial agriculture is not sustainable and in the long-run, much too expensive. There are enough examples that show that it could function differently.

SPIEGEL: Could the same amount of meat still be produced? 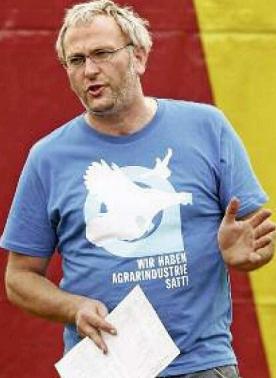 Fritz: Counter question: do we need stalls in which over 30,000 pigs live?  Of course we need to reduce the high quantity of meat produced, we don’t need surplus production.  Another form of agriculture would have no problem providing for Europe, and in a quantity that is healthy and sustainable.  That would be cheaper to society as a whole.

SPIEGEL: That would mean that Germans would have to reduce their meat consumption.  But they don’t want to do that, as was shown recently in discussions around Veggie-Day.

Fritz: I believe that the discussion was not about whether people would eat less meat, but who is allowed to decide that.  A recent study from the universities of Hohenheim and Göttingen shows 60 percent of Germans are willing to eat less meat.  At the same time, the number of vegetarians has doubled in the past 7 years.  The number of flexitarians, or people who are consciously trying to decrease their consumption of meat, is continuously increasing. This is definitely a trend – but nobody wants to be told not to eat meat on Thursdays.

SPIEGEL: Does this mean that one does not have to completely give up meat?

Fritz: I am not ordering anyone to completely give up meat. It also doesn’t have to always be organic meat. But one can pay attention to where the meat comes from, whether it is from ethically raised animals, whether they were fed soy feed from South America.

SPIEGEL: But people also need to be able to afford this meat.

Fritz: If we eat less, but better quality meat, it doesn’t come to this difficult social question. Moreover, today’s meat is much more expensive than the prices we see at the supermarket. Taxpayers pay subsidies to billionaires, and then the general public has to pay for the elimination of ground water contamination and increases in health care costs.

So what can we do?

Join Jochen and the team at Meine Landwirtschaft for their next demonstration, January 18th in Berlin!  More information here.

What Happened when a Tractor Farmer Protester came to WHES?

“I think we can take a white sheet of paper and draw a new picture for agriculture.” TIlo Von Donner of Landschafft Verbindung spoke at Soup and Talk, at WHES2020. So what else did he say? […]

Italy, France and Spain join forces on the CAP

Tripatrie agreement on expenditures and application of the CAP reform […]