ARC2020 platform members have seen the latest version of the Delegated Act today, Tuesday 17th December. The word pesticides has been completely removed from the Delegated Act! It has been replaced by a very weak legal reference to the WFD and nitrates directive which don’t do the job. More, including campaigning points, soon.

Following the European Parliament final vote on CAP reform on the 20th November, one would be forgiven for thinking that that’s the end of the bad news for the environment, rural Europe and best farming practices. There is however, one more stage at the European level, and its called the Delegated Act stage, stage, a new EU act category thanks to the Lisbon Treaty. And in light of this stage now appearing on the horizon, incredibly, 23 member states have bandied together to try to make EFAs – Ecological Focus Areas – even less ecologically focused. Vigilance, and pressure on your MEP, are required to prevent the worst ideas being slipped into the Delegated Acts. 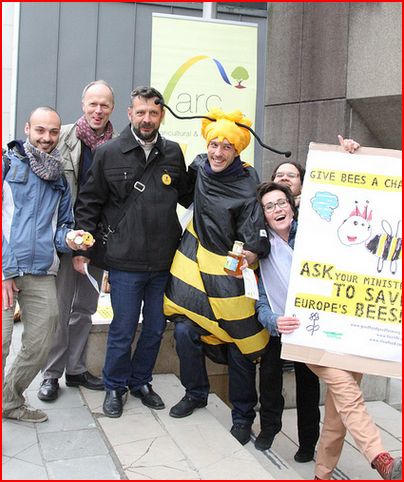 Delegated Acts are supposed to be, simply,  the Commission writing up the wording of the legislation already agreed. So while the already agreed Basic Acts deal with “the objective, content, scope and duration” of an Act, Delegated Acts “supplement or amend non-essential elements of the legislative act”. They are thus subsidiary to the Basic Acts.

However 23 member states* have come together to try to make a case for EFA’s as places where business-as-usual can occur.

The principle behind EFA is that they help increase intensity of agro-ecological processes – like pollination, soil formation and conservation, regulation of water and nutrient cycles – for the whole agro-ecosystem of the farm and surrounding area. In order to deliver such environmental public goods, there must be appropriate conditions: if we want pollination, there should be no pesticides applied; if we want to prevent pollution from excess nutrients, no fertilisers should be applied.

Of course with the great CAP dilution of the last 2 years, exemptions have already appeared: for example protein crops grown in EFAs do allow pesticides, according to DP reg annex VI.

They add: “Due to this provision, the conventional production on such areas will clearly be impossible.”

The European citizen, if informed, would surely be exasperated at the notion that  pesticides may be allowed Ecological Focus Areas: such a loophole undermines the greening of CAP. While civil society will need to keep focused on this sneaky move by the group of 23, there is a one word answer to the above sentence:

15 times more pesticide poisonings occur annually now than 30 years ago. About 385 million cases of acute unintentional pesticide poisoning occur each year, according to a new systematic review on global pesticide poisoning. This is up from 25 million annually in 1990, the last year such an estimate was made. Here Justice Pesticides outlines key findings of that review, as well as a study on pesticide contamination near intensively managed agricultural areas in South Tyrol, Italy. […]

EESC Glyphosate Debate as it Unfolded

The momentum behind the European Citizens’ initiative (ECI) to Ban Glyphosate (#BanGlyphosate) brought the campaign all the way to the corridors of the European Economic and Social Committee (EESC) in the EU quarter of Brussels Wednesday. Oliver Moore reports. […]

Undeniable Success of the ECI “Save bees and farmers”

The success of the European Citizens’ Initiative “Save bees and farmers” in 2021 was a historic result in the journey to reduce synthetic pesticides, restore biodiversity on farmland and support farmers to transition to agroecology. If the initiative is accepted by the Commission, the Commission will have to analyse and respond to the citizens’ requests. This article originally appeared in Justice Pesticides’ December newsletter.  […]