With the French Presidency of the EU, some specific areas have come to the fore for farming, food and rural Europe. Under a broad-if-wooly EU Green Deal framework, carbon farming, pesticides, geographical indications, and reciprocal standards (mirror clauses) for third countries have received added impetus in this six month presidency. Ashley Parsons takes us though some of these, and some other hot topics, in this mid month round up for us.

Carbon Farming Not a Substitute for Food Farming

On Monday and Tuesday of last week agriculture ministers met in Strasbourg for the informal ministers meeting. The main topic on the table was low-carbon agriculture, and the development of a low-carbon label.

In a press conference on Tuesday 8th, French Agriculture and Food Minster Julien Denormandie emphasised that the Commission unanimously agrees this is a step in the right direction in terms of climate transition. He underlined that the mission of farmers will remain a mission of providing food, but that carbon farming offers new revenues and a new tool in a carbon neutral future.

Work on developing a shared methodology for carbon label certification will take place through the summer, and we can expect a plan for regulation by the end of the year. The goal: to credit a standardized, credible and transparent (to avoid greenwashing, and double counting of carbon) EU carbon credit that is globally competitive and economically attractive.

Some NGOs, however, warn that carbon farming alone will not create low-carbon farming: reduction of pesticides and fertilizers, product diversification, heritage seeds, and a more circular link between animal, fruit and vegetable production and prairies, should be developed alongside carbon farming.

A public consultation on the certification of carbon credits opened on Monday and is accessible until May 2. 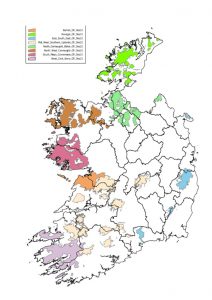 The Minister for Agriculture, Food and the Marine, Charlie McConalogue T.D. announced the launch of a tender process for the management of co-operation projects as part of the new CAP’s national agri-environment scheme (AECM). The services sought will support the establishment and management of co-operation projects across eight regions in Ireland in areas deemed to be of particularly high-nature value. This is seen as emerging from and developing upon the EIP – European Innovation Progamme’s areas, which Ireland has successfully developed (see article below)

Under Ireland’s CAP Strategic Plan, the new AECM is the flagship environmental scheme. It is accessible to all farmers, but eight areas in the country have particular environmental characteristics, and the farmers in those areas will engage through special cooperation teams. Those farmers will benefit from higher payment rates, up to €10,500 per year, depending on their participation and how environmentally ambitious their actions are. The tender is available here.

Pesticide Reduction & Organic Agriculture: the Nitty Gritty of the SIAO:

Last week we reported on how a group of ten ministers led on the watering down of the data collection specifications of the Statistics on Agricultural Input and Output (SIAO), which would result in a large gap of information needed to achieve pesticide reduction goals of the Farm to Fork strategy in the Green New Deal. During the first trilogue between MEPs and national governments, the new regulations of the SIAO were discussed.

Speaking to Euractiv, Petros Kokkalis, leftist MEP and rapporteur for the file, said that on the Parliament’s side, two main points aim to ensure that the regulation is fit for the Green Deal and increased transparency.

The MEPs must also grapple with the subject of reporting organic agriculture statistics. In the original proposal by the EU Council, certain provisions included in the text hindered or limited data collection on organic agriculture. The administrative burden that such data collection could mean for farmers is also a topic of high priority, although Kokkalis (and others) believe that technology like smartphone apps could lighten this weight.

To Come: Eliminating Ties to Deforestation

In the coming weeks, we’ll be taking a deeper dive into deforestation and what deforestation-free products mean. Of relevance are the Agriculture (AGRI) Council policy debate set for Monday, Feb 21. March 17th sees the Environment (ENV) Council meeting, which is more important again, as the main configuration is with ENV.

Through April, the MEP’s environmental committee will be receiving submissions and considering the draft report of the deforestation regulation, with 21st April the deadline for submitting amendments. The aim is for a vote in the Environment committee mid July and full Plenary mid September, then trilogue from then on. (Full legislative train can be found here, with noteworthy graphics!)

The overall aim is to minimise the impact of EU trade on deforestation and forest degradation. According to a Commission estimate between 1990 and 2008, EU consumption led to 10% of global deforestation. An EU-wide deforestation-free mandate would require due-diligence for companies placing products on the EU market, but a number of issues regarding the scope and extent of the proposed regulation have been raised. Questions concerned, in particular, the list of commodities covered, the scope restricted to forests, the protection of the rights of local communities and indigenous people, and the role of the financial sector and investments.

Deforestation is not the only topic on the table. The February Council meeting will also continue the discussion on initiatives to accelerate the ecological transition as per the French presidency goals. Ministers will exchange views on ways to strengthen coherence between the European Green Deal, the CAP and the EU’s trade policy.

Keep an eye on this space or the Arc2020 twitter to get the full scoop before the Monday, February 21 Council meeting in Brussels.

As people wind down towards the holidays, DGAGRI pulls a fast one […]