After months of preparation, there are now just a few days to go before the international demonstration against industrial farming takes place in Berlin on Saturday 19th January. Now in its third year, the demonstration is expected to be bigger than ever. The growth in the program alone suggests 2013 is going to be a year to remember, with events kicking off on Thursday evening and running throughout the following three days.

A centre point for much of the action is Markthalle Neun, a restored market hall in the centre of Berlin’s fashionable Kreuzberg district. We met up with the managers of the hall – Nikolaus Driessen, Florian Niedermeier und Bernd Maier – to learn more about their expectations and aspirations for the program of events they are hosting, known as Grüne Tage (Green Days), and to learn more about their ongoing work for good food and good farming…

This is the third year that the demonstration has taken place, how did Markthalle Neun first get involved and how has the role changed over the three years?

In 2011, the Markthalle wasn’t yet open to the public. We had the space, but not much else. The organisers of the demonstration were looking for somewhere to host a pre-demonstration breakfast for all those who had travelled to Berlin to take part in the demonstration.

At that the time, the Markthalle was home to many plants from the nearby Prinzessinngarten (a local urban garden project), as we had agreed to take care of them during the winter months. It was through our work with the garden that we started to work more closely with the demonstration team. That year, we were joined by over 500 people for a great feast, surrounded by nature. It was fantastic.

By 2012, the market was open to the public. It had been decided that a large volume of soup should be made and served at the demonstration, and Markthalle Neun had agreed to organise it. Working with Slow Food Berlin, we quickly got our hands on over a tonne of vegetables that would normally be thrown out due to their ‘unsuitable appearance’. What we didn’t have however were enough people to wash, chop and cook them: External help was needed. We decided that if we made an evening of it, with live music and DJs, we might be able to encourage people to come and help out. With over 300 people accepting our invite, the Schnippeldisco became an official concept: Since the event in Berlin, the disco has gone on to become a popular action against food waste across Europe.

This year the role of the Markthalle has grown once again. Along with the help of some of our local partners such as Slow Food Berlin, Meine Landwirtschaft, Flaming Kitchen and ARC2020, we are holding a 3 day program of events called the Grüne Tage (Green Days).

Can you tell us a bit more about the program surrounding the demonstration on the 19th?

The Grüne Tage program begins on Thursday evening, January 17th, at 19.00 with an ARC2020 event about Landgrabbing in Romania and here in Brandenburg. A panel discussion will address the issue in the area surrounding Berlin, as well as in eastern Europe; in particular Romania. Panel guests include an organic farmer from Brandenburg – Carlo Horn; an organic farmer and campaigner from Romania – Willy Schuster and ARC2020 web correspondent for Romania – Attila Szocs. The evening will be moderated by Kai Roeger – former chief editor of the Berlin city magazine, Zitty.

On Friday and Saturday, our sustainable food market will run as normal, but with an additional 20 food stands. As with the previous two years, the breakfast will be held on the morning of the demonstration from 08:00 till 10:00… while the rest of Berlin still sleeps! On Saturday evening, people are welcome to come by and chill out after a busy few days! Those with energy left can head to a concert at nearby venue Bi Nuu.

Find the full program here: in English and in German.

How would you describe the role of the Markt Halle Neun during the demonstration and the Grüne Tage?

For us Markthalle Neun really serves two roles. The first is to provide a real life example of the kind of food and farming that the demonstration is calling for. Parallel to the International Green Week where politicians are most likely to continue to push industrial agriculture, we are providing a series of local green days that show another way is possible, and more sustainable. Essentially we are allowing people to see, touch, and of course eat, the future of food and farming we want!

The second role is a more practical one. Throughout the 3 days, we want there to be a central (and indoorish) place where people can always come to meet with others and share experiences. Our doors will pretty much be open for the entirety of the 3 days, and we look forward to welcoming people from across Europe.

How many people do you expect to visit the Markthalle this weekend?

Different events will attract different crowds. The Schnippeldisco for example is likely to attract many local people, as well as those who are in town for the event. The breakfast on Saturday morning however is more likely to be those who have travelled over night to take part in the demonstration.

Over all, it is hard to estimate how many people will visit the Markthalle over the next few days, but needless to say, we expect it to be lively and pretty busy at all times.

Which events are you most looking forward to?

The farmers’ breakfast on Saturday morning. For us it’s been a real highlight of the past two years. Not only does it remind us of the first year we came together in Berlin, but also, it is a reminder of why we are organising the demonstration. The people who normally attend are just normal people: farmers, families, workers. Many of them will have travelled overnight for a cause that is central to their livelihoods. This for us is when we meet the people for whom the changes in agricultural policy will have a direct affect on their lives, and the lives of their children. There is always a great atmosphere and a sense of togetherness before we set off to the starting point of the demonstration. 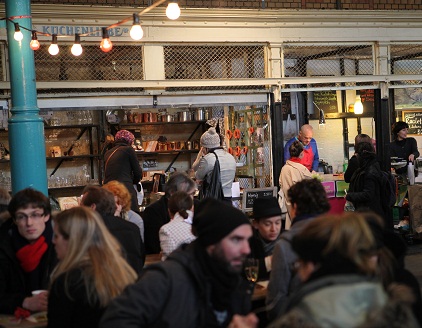 And finally, in three words, can you describe the demonstration to people who have not attended before?

…and the Grüne Tage?