What happens when you end up with a 8000 continuous, connected hectares of certified organic land? Well, for one thing, you can listen to the soil.

In other words, you hear the birds singing, as the web of life is less interrupted. This is the purpose of an art project by Daniel Volter, one of many associated with the Das Gut Wilmersdorf – the Wilmersdorf Estate, east of Berlin in the Uckermark region, in what was the former German Democratic Republic (GDR).

The landscape here, and deeper into the east of Germany, is formed by geology and also by politics. The soil is good in places but fundamentally its mixed, as the landscape was formed in a glacial valley – so soil types vary mere metres apart.

While the farms are huge too in the Czech republic, there are millions of small farmers in Romania. The process of collectivisation in the former Soviet bloc was not a uniform one. Here in what was the GDR the 20th Century saw land go from Aristocratic to Communist and back to individual ownership.

Aristocrats owned this estate from 1626 to the end of the second world war. In East Germany, smaller semi-private holdings were tolerated – indeed small land parcels were redistributed to incoming refugees which they owned, provided they worked it. Anything over 100 hectares acres was mostly collectivised– here, the land first went into Volkseigenes Gut (VEG) – which were state owned farms. Then in 1979, it became an LDGs (Agriculture Production cooperatives). In LDGs, workers had more of a say, while the title of an LPG was legally distinct from the state – they were technically private, but with strong Communist Party influence in a planned economy.

After German reunification, a descendant of the last owner, together with the current managing director Stefan Palme, started farming Wilmersdorf.

With huge fields, historically disputed and moving boarders, depopulation and corporate ownership of farms is very typical of this region.

“Priority was given to previous owners and to people who said they would live in the region – especially those willing to farm organically” Stefan tell me, as we stand in an enormous machinery shed, surrounded by several Fender and John Deere tractors with tyres almost as tall than me.

This farm employs 12 and is 1100 hectares – and all Stefan Palme’s organic neighbours are similarly sized.

This is very much a precision organic farm. With the crop growth variability due to the soil types varying so much, it has to be. Ph varies, mineral levels vary, so important nitrogen fixing plants (clovers and legumes) have needed help.  Selective soil sampling has been routinised since 2008, which involves a sensor platform that can take over 50 samples per hectare. The farm also works with Universities, and has developed application maps based on measurements open source, free GIS (Geographic Information System) software called Open Jump. This led to changes in lime application and other fertilisation methods.

(For more details on this, an article and presentation by Stefan in German is available here)

Rotations, harrowing (finger and disc) and beneficial insects are the main weed control techniques. Oilseed rape is avoided in part because it can be a “sensitive” crop to pests, while wild rye and poppy do require management.

There are 15 crops grown here, including wheat, oats, rye, spelt and barley, and then green manures that also play a role as crops – grain legumes such as lupins, vetch and mustard, and then some less typical flavour/aromatic/medicinal crops such as cumin and fennel. 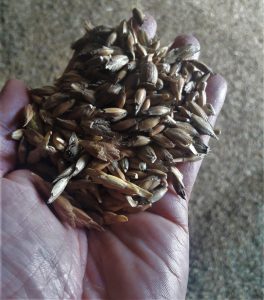 Yields are impressive: winter barley at 4 tonnes a hectare, summer barley at 3.5 tonnes. While the yield gap is small and getting smaller compared to his last few remaining conventional neighbours, “there are conventional farmers near the Baltic, with good soil, with much higher yields” Stefan adds.

However, organic yields something else too – 200E per hectare more than those conventional fields, Stefan emphasises.

Germans love their bread, and increasingly, their organic bread, so organic bakeries in and around Berlin are where the wheat ends up. So while you can listen to the soil out in Angermünde, you can eat its bounty in Brandenburg.

A version of this article appeared in Irish Examiner farming.

Farm Incomes Down Across EU

EU farm incomes are down, but are plummeting in European powerhouse economy Germany. […]

The battle for the future of food: a new report by IPES-Food and the ETC Group sets corporate power against the irresistible force of social energy. Laying out a vision of civil society-centred food systems founded on agroecology, diversity and human rights, this is a call to rapid action, reports Ursula Billington. […]

The COVID-19 pandemic draws attention to many things, including our global connectedness, the role of ‘big government’, marginalisation, solidarity, and the ‘unsung heroes’ who keep essential systems running. For all of us, it tests our resilience… […]