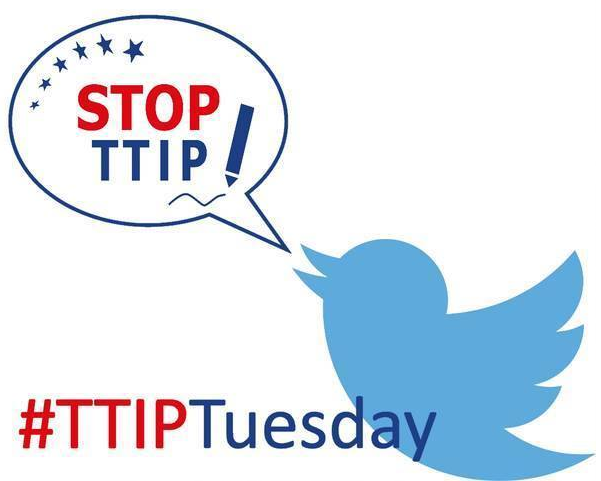 First comment from IATP: Following months of intense public opposition to Fast Track, the House of Representatives today defied the Obama administration’s trade promotion package. The debate over Fast Track blurred party lines. “It took real courage for those Democrats and Republicans who stood up to the President and Republican leadership and opposed the free trade package. They defended working families, farmers, natural resources, the environment and most importantly, democratic principles,” says Juliette Majot, President of the Institute for Agriculture and Trade Policy (IATP).
“This is a clear rejection of the free trade agenda that favors big business over workers, farmers, consumers, and our environment. It’s time to bury this failed approach. I just hope the administration is really listening to what was said today, and what citizens groups around the world have been saying for years. We need very different rules that enhance local economies and jobs and advance efforts to rebuild our food system so it is fair and sustainable,” according to Karen Hansen-Kuhn, IATP’s Director of International Strategies.

Politico.eu: “Under parliamentary rules, the president can postpone a vote if there are more than 50 amendments. More than 200 were tabled, meaning that although Parliament will still debate TTIP on Wednesday, the resolution text will now be sent back to the International Trade Committee for possible changes.”

“In my 11 years in this house, I cannot remember something like this happening.” EPPMEP  Christofer Fjellner.

Tension too in France

As Europe’s MEPs travel to Strasburg for an important vote on the 10th June on the Transatlantic Trade and Investment Partnership  – TTIP –   and ISDS  – Investor State Dispute Settlements – it is becoming clear the vote will be very tight. This is because the Socialists and Democrats group  (S&D), which is the second largest in the Parliament, is in turmoil over the controversial agreement.

Last week, we showed  how the group has flip flopped on ISDS. Despite having a formal position on TTIP critical of ISDS, S&D members of the INTA – trade committee – did a deal with the EPP (centre right European People’s Party) to accept the EPP’s weak wording on ISDS. This in effect means no real protections are offered against ISDS’s external arbitration in the draft resolution which was adopted.

ISDS would allow for ad hoc arbitration tribunals, where corporations could sue governments for damages – essentially over lost potential profits – if laws are changed by these governments.

Euractiv report that despite this INTA vote, “at their meeting in Brussels on Thursday (3 June) the S&D group in the European Parliament reasserted their initial position, adopted last March, to exclude an arbitration clause from the deal.”

“”The S&D Group will not accept any kind of private arbitration. ISDS is definitely not the way forward. Both the United States and the European Union have reliable national courts which should be the regular procedure to solve any dispute,” said MEP David Martin, the S&D spokesperson on trade.

He insisted that the right of governments to regulate in the public interest must be “unambiguous, and the principle of equal rights between national and foreign investors must be safeguarded”.”

This potentially aligns the S&D group with the other three groups opposing ISDS – the Greens, left wing GNU and euroskeptic EFDD groups. However this too is unclear, as Politico reports, the S&D group is divided. Politico point out that that S&D 66 MEPS have signed a statement which aims to remove mention of ISDS altogether. There are thus two blocks in the 191 MEP group.

All amendments are available here

Why your MEP should  support Amendment 27 and Amendment 13 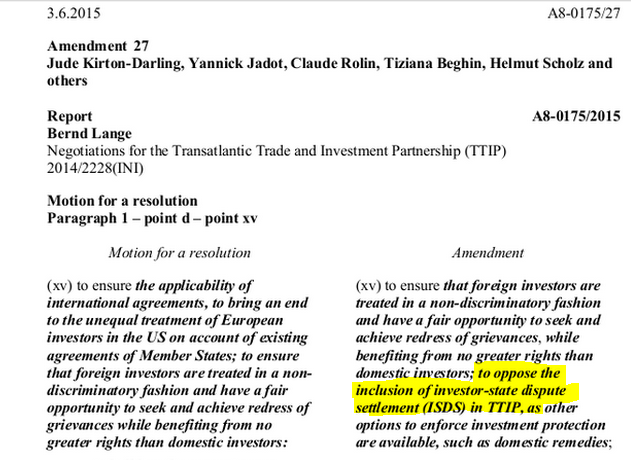 From the Stop TTIP campaign, which ARC2020 is a member of.

STOP TTIP is an alliance of over 460 civil society organisations. It launched the European Citizens Initiative against the freetrade and investment agreements TTIP (between the EU and the US) and CETA (between the EU and Canada) which now has over 2 million signatures!

Tomorrow is a really important #‎TTIPTuesday‪‬. Let’s contact our MEPs!

Below some ideas & remember to replace @mep by the actual twitter contact for your MEPs which you can find here: http://bit.ly/1KAlmcQ (note opens excel spreadsheet).

Remember that the S&D group are, as we have shown above, wavering on this issue so its really important to target this group of MEPs.

Email your MEP via No2ISDS (all MEPs)

ISDS: Spreading the disease instead of looking for a cure. (06/05/2015 Seattle to Brussels)

Tens of Thousands of U.S. Firms Would Obtain New Powers to Launch Investor-State Attacks against European Policies via CETA and TTIP “47,000 U.S.-owned firms would be newly empowered to launch ISDS attacks on European policies and government actions” .

European negotiators have struck a clumsy compromise to protect about one in 10 of the EU’s Geographical Indicators (GIs) during transatlantic trade talks with the Canadians. Protected geographical terms have long been a bone of contention on the other side of the Atlantic, as ARC2020 reported earlier in its TTIP coverage. Classified by some as a technical barrier to trade, the EU’s extensive register of geographical indications (GIs) has often been held up as an example of unfair practice by traders up and down north America. On February 29, the European Commission released a summary of the final text of the Comprehensive European Trade Agreement with Canada (CETA), which is widely regarded as a TTIP testbed. Had the details been in the public domain earlier in the negotiating process they would have sparked howls of protest: the current document, however, represents a fait accompli with a sting in the tail. There are over 1,400 EU geographical indications, many of them wines and spirits that were bundled into the existing EU-Canada Wines and Spirits Agreement, which […]

Written by: Claire Bernardin, Land Rights intern at Eco Ruralis; additional content via Corporate Europe Observatory. “Soon, journalists and their sources could be sued by companies if they reveal what these companies want to keep secret. Unless we react to defend the investigative work of journalists and, by extension, the right for citizen to be informed. Under the alibi of the fight against industrial espionage, the European Parliament is preparing a new massive weapon against journalism,”trade secrets”, whose definition allows not less then an unprecedented censorship in Europe.” That’s according to the petition launched by Elise Lucet, a French investigative journalist, which is  approaching half a million signatures. It all started on November 28th 2013 when the Commission submitted a draft proposal aiming to homogenise the definition of a trade secret throughout the EU. This would fight economic and industrial espionage by protecting companies against the unlawful acquisition, use and disclosure of the aforementioned trade secrets, thus enhancing competitiveness in the Union. However, voices arose among civil society to denounce the dangerous vagueness of the bill. […]